Yes Scotland - How Can we Help?

As Scotland wakes up to the fact that the hopes of Independence have been dashed and the army of #VoteYes feel "a little down" and are licking their wounds... this Glasgow nutter wonders if victory might be snatched out of the jaws of defeat. Is the best yet to come?

The Miracle of @YesScotland
As I slowly became a convert to the "VoteYes" camp, I wandered down to some of the events at George/Independence Square in Glasgow and I started to get excited about the Yes Scotland movement, it had achieved something that NO OTHER POLITICAL ORGANISATION COULD! People from every walk of life was sharing the same space and sharing in an atmosphere of hope, and a brighter future.

It really is impossible to stress how diverse the people were from every ethnicity, every age group, people with views across the political spectrum and from different socio-economic backgrounds. It was the kind of chaos that I have absolutely no doubt that Jane Jacobs would have marveled at.

The Disappointment... The Risk
I don't know if it's because I was looking at the world with the disappointment of a "VoteYes" supporter, but the atmosphere on the bus going into town this morning was really depressing... there was no sense of excitement from the "Better Together" camp, no sense of "We Did It... We got the outcome we wanted," I suppose it's difficult to get excited about maintaining the status quo for fear of the unknown.

I have explored the roll out process of technology in education and can see parallels with the "Yes" camp being the early adopters, the visionaries, the risk takers, the change agents and the #NoThanks voters being "Laggards" who are more conservative and more risk averse... and both groups arguments are valid.

A Brave New World
The founding fathers of America were the risk takers maybe because they were early adopters and relished the thought of a risky endeavour... or perhaps it was a case of they were so desperate that they felt the alternative was no worse than the status quo.

However, many of these early settlers found the risks were very real and whole colonies perished, including Scotland's own Darien Venture, which led to the formation of the Union...So the #NoThanks perspective is valid, and their concerns about the risks are very real. The difference of opinion with the early adopters and laggards becomes especially important with "discontinuous" innovations. 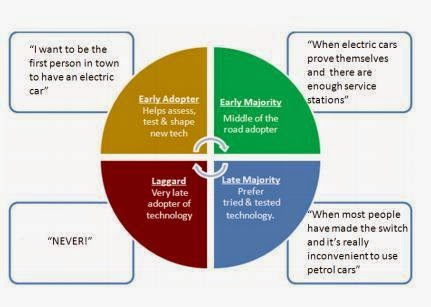 Continuous Innovation Upgrading products that do not require people to change behaviour. i.e. A new car which promises better mileage is a continuous innovation

1999 DotCom... Boom, Bust Or Opportunity?
In his book "The Winners and Losers of the Internet" Kieran Levis highlights how it is wrong to see the dotcom bubble bursting simply as a failure. He wonders if we would have the infrastructure we have today without it... would the fibre optic cables that allow us to stream videos and music etc be here today without the dotcom companies that have long since disappeared? Could you imagine if we were still struggling with our dial up connections?

If anyone is feels that @YesScotland was a "failure" this morning, would it be possible to achieve many of these goals a different way... because of the success of @YesScotland?

@YesScotland Lost Independence... Or New Opportunities
In his book "Tribal Leadership" Davd Logan suggests that the best way to create a great Team Culture is for people to have a "Noble Cause" that people rally round to achieve

John F Kennedy did a fantastic job with this when he said "We're going to put a man on the moon" people across the US rallied round this "call to action" ...scientists stepped up their experiments, teachers taught more science, kids dreamed of space travel. JFK didn't give each group a set of instructions... he just dared people to imagine and to explore what might be possible.

The US Army have taken a cue from this kind of leadership and instead of giving a specific set of instructions to each platoon/soldier they give a general command "Protect this bridge" and everyone uses their initiative, skills and experience to complete the task.

#VoteYes and @YesScotland may not have achieved independence, not because of anything that Alex Salmond or the SNP did wrong, it was just that;

I'm sure that Alex Salmond and the Yes Scotland Team could do with some cheering up today, and I have a crazy idea that might do just that...

1.6 million "5minute Favours"
Westminster MPs don't care, we know this otherwise we'd be living in a fairer society already. The #BetterTogether people felt the risks were too great, that's understandable.

But there's is an infrastructure of 1.6 million people who want change... can we be the change? Could we think of some 5 minute favours that we might be able to do for someone. A 5 minute favour is;

"Something that will only take you 5 minutes to do but could have a big impact on the recipient" Here's Adam Grant explaining more about this idea;

Or maybe you can do something more than a 5 minute favour... maybe you can give someone a second chance? In Tribal Leadership Dave Logan highlights a company who has an open door policy for a drug addict, his job is always there for him when he is clean but if he starts using, he's out... until he gets his act together again.

This tells the employee that someone cares, that there is an alternative lifestyle there for him, there's help, support, advice and mentors. This mirrors Henry Ford who employed ex-cons and found that they were amongst the hardest workers because they were grateful of the second chance... and knew it was unlikely that there would be another employer if they mucked this opportunity up.

Magic Johnston has revitalised some inner city areas in the US and his advice at Arizona University's Education Innovation Summit was "Get a mentor," which is also what Dave Logan recommends.

Here's more on how Stage 5 Teams can change the world, like #YesScotland has done... and can continue to do:

In George Square this week I have seen what some might term "Neds" mixing with the middle classes and guess what, the middle classes are not only still alive, but they we laughing their heads off at the quick wit these young people had... They were typing the witty one liners and chants they came up with on their mobiles so didn't forget them all to share with friends.

What opportunities could this open up for collaboration, mentoring and second chances? Oh and before you think that this wouldn't work with the most marginalised groups today check this out: California Prisoners become Startup Tech Entrepreneurs

While the nation is united in a unique way are there some new possibilities? Below is an idea that I suggested 2 years ago in this "A House Divided Against Itself Cannot Stand" post... Maybe all the #VoteYes, @YesScotland, One Scotland army can do something with it.

Dream Make Over – The Big Clean Up

We’ve had the Big Sort, we’ve had the Big Society maybe we need someone to suggest that we need The Big Clean Up before we have any more plans. We also know that people will get behind this because they already helped clean up in the aftermath of the London Riots.

After writing this post I noticed that I was not alone and that #The45 had been established and was soon trending... It would see that the 1.6 million #VoteYes army is is standing by to help out.

I've created this Google+ the45 Page to see if and how this idea of 5 minute favours might be able to pick up where #Indyref has left off.

Finally a note to all the #The45 people on Twitter, remember what you Tweet sets the tone of the community and, if this ignites the imagination of the 1.6million the world will be watching... We owe it to Alex Salmond and Yes Scotland to keep the message as upbeat and as possitive as they did... Now go BE THE CHANGE you want to see.
Posted by William Jenkins at 05:44