When the Scottish Independence Referendum debate was really heating up Apple's annual product launch presentation unveiled the Iphone 6 and the iWatch. Here we explore three things that Apple and the Yes Alliance have in common. 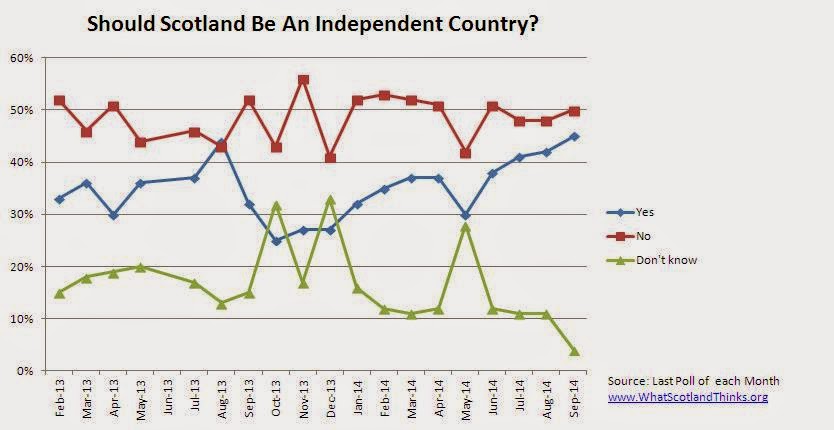 Interest in the referendum gets intense when Alex Salmond and Alistair Darling go up against each other in their first TV debate.

The fiery debate ended with both the Yes and No camps claiming victory, but a snap ICM / Guardian poll showed 56% thought the former chancellor had won, with 44% choosing Salmond.

25th August 2014
The second televised debate takes place between Salmond and Darling. This time the ICM/Guardian snap poll shows 71% of viewers felt the First Minister had won, with just 29% putting the Better Together chief in front.

7th September 2014
A new poll for the Sunday Times, by YouGov shows the Yes campaign in front for the first time.

8th September 2014
A second poll, this time by TNS, shows the two campaigns neck and neck with 10 days left until the referendum.

Apple has it's annual event to showcase it's new products. This year it includes the iPhone 6 and the iWatch. Apple isn't usually the first to roll products out but, when they do they tend to dominate. For example MP3 players, mobiles and tablets were out long before Apple entered these markets, but today are market leaders.

What about "First mover advantage"?

As far as I can see, the similarities between the last 2 weeks of the Vote Yes camp of the referendum campaign Vs The way Apple roll products out appear to be very similar.

1) Product Market Fit
Apple: In our Technology in Education report "Developing Relationships and Delivering Value" we included an article about the iwatch from Feb 2013 which asked if Apple can play watchmaker. We would like to draw particular attention to this comment from this article;

"To build and to ship are two entirely different things, and Apple often does the former, but only selectively continues through to the latter"

Many tech companies will work from their clients office to identify the needs and create a bespoke product. The SNP exemplified this with

Not only does Westminster need to consider the needs of England, Scotland, Wales, Northern Ireland and Europe. The uneasy Team of rivals that was "Better Together" was nowhere near as cohesive or collaborative as the Yes Alliance.

Being a small, but determined team, is absolutely no handicap when up against the more encumbered market leader that is "set in its ways". Especially not when you have the intelligence, vision and determination. Alex Salmond and Nicola Sturgeon reached out to anyone who shared their vision of Scotland's Future to form the Yes Alliance and a collaborative form of politics. See Appendix 2 to see how this strategy was similar to when Google was looking for a new CRM supplier (What Would Google Do? P35):

So what did I learn from [Choosing a risky Startup Vs established Company] this? I learned that the obvious solutions are not only the ones and “safe” choices arn’t always good choices. I had thought that due diligence meant finding the product most people relied on, then putting pressure on the vendor to cut the price. It never occurred to me to talk to a start-up...

We have different tolerances for risk and different ideas about what two smart people working alone could accomplish...Two smart guys working on complex technical problems, it turns out, can accomplish a hell of a lot. Doug Edwards, Google Employee 59

2) Presentation Matters
Apple: "I define a miracle as something that comes in and changes your life for the better in ways you did not expect."

Is how the mother of an autistic child explains "The miracle" of an iPad because of her son's enthusiastic engagement with it, which features in a video celebrating the first year of the Ipad.

In "Life's a Pitch" Philip Delves Broughton continues to observe how;


Apple thinks and behaves like many of history's greatest evangelical organisations. It was founded and was run for many years by a highly charismatic leader, who refered to his own achievements as "magical" and "revolutionary." Its advertising describes its products as possessing miraculous powers.

In the same film as the mother with the autistic son, Ron Johnson, who oversaw Apple's stores at the same time, says, "The iPad has to be held, has to be touched to truly understand how magical it is" - as if it were the Turin Shroud.

Then there is the fact that Apple put a lot of work into their product launches. In his book, Talk Like Ted, Carmine Gallo observes that the Apple team spend 250 hours on the presentation for a 20 minute product launch.

Yes Alliance: Presented their message in a similar way to Apple, they did not focus on features & functions of how an Independent Scotland would operate (Admittedly an issue that the Better Together camp exploited, but did not endear itself to the public). The Yes Alliance focused on the benefits, what independence would mean to the people - a fairer society, Bairns not bombs, health, education but not in a 5 year plan and all statistics and dry documents. Neither did they focus on the issues that appealled only to the elite, currency and markets etc.

3) Social Proof
Apple: Apple are very effective at utilising their brand advocates and fans, they send out press releases with some of the functionality and whip the fans into a frenzy. This means that on launch day the advocates are jumping up and down on their seats, everyone in the audience can be seen in the media coverage looking at their new watches with awe and wonder.


The difference between going into an Apple store and some other electronic shops is night and day as one is uber helpful and friendly, other play keystone cops as they chase you round the shop trying to sell you stuff! One is very effective at getting the til ringing, the other is not. Both are approaches are very much focused on sales...although the difference may be you "Buy" at one and are "sold" stuff at the other. Something that both Apple and the Yes Alliance used to good effect is "Social Proof"


"No leader can hope to persuade, regularly and single handedly, all the members of the group. A forceful leader can reasonably expect, however, to persuade some sizable portion of group members. Then the raw information that a substantial number of group members has been convinced can, by itself, convince the rest. Thus the most influential leaders are those who know how to arrange group conditions to allow the principle of social proof to work maximally in their favour" Robert Cialdini

Yes Alliance: Having achieved product market fit, established a collaborative alliance (who put together a tremendous grass roots campaign), communicated the message well... it was time to pull it all together. On the 15th September

The people of Scotland behaved like Apple evangelists at a product launch.

There was an uprising of "Vote Yes" in Glasgow, revolution was definitely in the air... the winds of change were blowing. 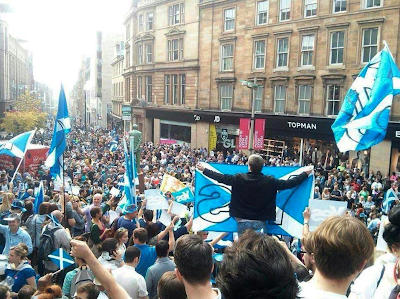 Bringing it All Together
What happens when you bring Product Market Fit, a well communicated message and Social Proof together? Some seriously positive PR! By building a compelling product/vision through establishing close relationships provides a loyal fan base. Putting on a show when you bring the product/visions together with an enthusiastic fan base sees everyone talking about it.

It is these 3 factors that play a significant role in making them the market leader with any space they enter, regardless of how late they are to the party.

While this may sound very straightforward, this is extremely challenging to get right. The culture matters so much and requires a massive amount of collaboration.

Tech guru Geoffrey Moore and more fun and visual demonstration of him explaining these principles that help Apple to become the market leader. How Dancing Guy Crossed the Chasm.

We saw that these concepts were so powerful that the momentum lead to #The45 & #The45Plus, but a lack of understanding of these concepts led to the culture and momentum being affected.

The question is can we get this momentum and culture back to get the party started again? This is something that we will be exploring in the next few posts.

Posted by William Jenkins at 05:10