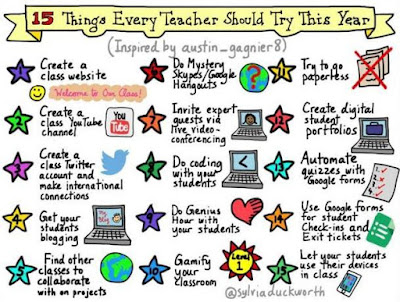 This post details how and why I am starting to see California based companies and teachers in the classroom as a better bet for EdReform Vs Governments and policy makers.

People are more than welcome to disagree with the argument that I lay out in this post, I'm the first to admit that I'm just a random Tech sales guy who's trying to figure a few things out... and uses this blog to "Think Out Loud" as well as to share my research and experiences. 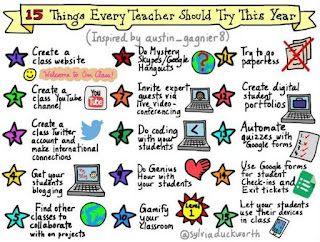 Depending on on the schools supplier "create a class website" and some of the "gamification apps" used may also be California based.

We have all these "vendors" who try to sell their wares to education and have a tough time (both selling their product and with getting a bad reputation with educators).

Yet, just as 40 of the top 100 tools for learning in the post above are, here are 10 major tech companies who feature heavily in an educator "Must Try" list... But who don't have sales reps that get on the phone and "Sell! Sell! Sell!" Instead educators are recommending, advocating and selling their services for them. For example:
Vendor Vs Government Initiative Vs Must Try Tech
What if we were to ask the people who rave about Twitter or any of the other "Must Try" tools that come out of California (And other innovative Tech companies) the following questions;

1) Are they dismissive of and/or get a little bit agitated any time they hear the word "Vendor?"

Go type in "#ISTE15" and "Vendor" together on Twitter and see what comes up. It's not pretty! I would sure think twice about exhibiting at the event as a result of some of these negative comments (Any time I've checked 50%+ of comments can be quite negative).

Talk about a mixed message! Educators don't appear to be fans of vendors... but then advocate some companies to colleagues by saying that they have *MUST TRY* tech?

It's great that major tech companies and EdTech incubators have the luxury of offering free products because they have the resources and/or investment but... is this having a negative knock on effect on others?

"It's hard for EdTech companies to raise money. But these EdTech company founders have concerns that run deeper - to growth, to market potential, and to the harsh realities of whether "free" or "freemium" products can transform into sustainable business plans" Why EdTech Companies Fold

2) Are these educators as supportive of Government initiatives like Common Core or Attainment Tests as they are with these tech tools?

Whether the US Common Core, UK's Academy obsessed policies or Scotland's proposed Attainment Tests, do you see these as "Must Try" initiatives?

Government Initiatives... and Inconsistencies
I rarely see any reference to this education initiative or that which is the brain child of the government of the day being spoken about as a "Must Try" project to address the various gaps that an education system that this group created... and that they are responsible for! Here are just a handful of examples to draw these points out

Banks Vs Schools
Last night on the news I heard that the UK spends as much on the interest for the national debt that "we created" as it does on it's schools?!
Speaking of money, we bail the banks who plunged the country into debt out, pick up the bill... But then read that the living wage "isn't feasible" as would cost £20 billion, but The National Audit Office figures put the UK governments 2009 bank bail outs at £850 billion?!!!

Banks Vs Other Industries
When the topic of the steel industry came up on BBC Question Time last week, Scottish Conservative MSP, Annabelle Goldie basically said "Let the steel industry go to the wall"... yet the banking sector was given £850 billion.

What's the difference? That the bankers went to Eton with David Cameron and George Osborne? Or was it that the banks going to the wall would affect politicians and their cronies personal wealth?

Big Personalities Vs Due Diligence
The charity "Kid's Company" has also been in the news recently, and there has been criticism that successive governments gave Camila Batmanghelidjh £46 million without doing the right level of due diligence, despite warnings from various governing bodies and colleagues in the civil service. The reason given? Because they were influenced by the "larger than life out going personality" of the organisations' founder?! Compare MPs and Batmanghelidjh personality with this

"If you're an introvert, find your flow by using your gifts. You have the power of persistence, the tenacity to solve complex problems, and the clear sightedness to avoid pitfalls that trip others up. You enjoy relative freedom from the temptations of superficial prizes like money and status.

Indeed, your biggest challenge may be to fully harness your strengths. You may be so busy trying to appear like a zestful, reward-sensitive extrovert that you undervalue your own talents, or feel underestimated by those around you. But when you're focused on a project that you care about, you probably feel that your energy is boundless.

So stay true to your own nature. If you like to do things in a slow and steady way, don't let others make you feel as if you have to race. If you enjoy depth, don't force yourself to seek breadth. If you prefer single-tasking to multitasking, stick to your guns. Being relatively unmoved by rewards gives you the incalculable power to go your own way. It's up to you to use that independence to good effect. Of course, that isn't always easy..." Susan Cain, Quiet

2,000 Years of Big Ideas Vs Three Tech Companies
At the Learning Technologies conference last year Donald Clark ran through 2,000 years of learning theory, dismissing many of them, before going on to detail three technologies, created by commercial tech companies, that could change learning forever.

Like Chris van der Kuyl's Scottish Learning Festival keynote...this presentation is well worth a look!
100 Years of Deprivation
I found the quote from Andrew Mawson's book "The Social Entrepreneur" interesting. In his book Mawson details how he turned around the fortunes of Bromley-in-Bow (Using the kind of tactics that did not seem too dissimilar to Jane Jacobs ideas and/or how Boston's North End was "Unslummed")

"The real tragedy is that, broadly speaking, the areas of deprivation in the UK have not shifted a great deal since Dickens Day, and any talk of a new approach of the kind I fervently believe would work has led to nothing but lots of strategizing, meetings, papers, conferences, seminars, websites...and when the money runs out, there is nothing left to show, no tangible results and so, of course, the show moves on." Andrew Mawson, The Social Entrepreneur

Some Inconvenient Questions?
So, given the track record above, as the Scottish Government look at new strategies like Developing the Youth Workforce, Attainment Tests and their Digital Learning Strategy it might be obvious to ask questions like;

The Curriculum for Excellence was established in 2002 and is now rolled out, but if you search news articles you can see it has plenty of critics. Will these new initiatives be the same? If not, why not? What's changed?

"Much has been written in the media, blog posts, by academics and some organisations [about the National Improvement Framework] that must make for very uncomfortable reading for the Scottish Government. The vast majority of what has been written is opposed to the reintroduction of standardised testing" George Gilchrist

A quick read of George Gilchrist's post "Austerity, Education and Losing Sight of Learners" as well as the reaction to the post from the education community, and the answer to "What's changed" appears to be "Not much." Neither do these initiatives appear to be featuring in the *MUST TRY* category for educators any time soon. Selling these ideas look like it's going to be a challenge... even though it's free to educators.

So, what should we make of politicians when they give a fine speeches about their commitment to education, when they have the record above? I'll say it quickly and quietly to avoid any intensity and say;

"I think some people are on the bus to Abilene here"

Making such a statement will probably see any new found popularity in some areas of education be short lived, maybe it's just as well I'm an introvert and have... how did Susan Cain put it? "The incalculable power to go my own way" personally, I like the look of this direction

Quality Work
If we take the tech companies that educators rave about, compare the results these tools have with the government's short, medium and long term record... and then check out the results from these articles:
If you were to objectively ask... which horse is worth backing, what would the answer be?

Something that surprises me is how neither other "vendors" or government agencies seem to take the time to see what these "Must Try" tech companies do differently. After researching this in some detail I've found that my Startup Education post in April 2013 wasn't a million miles away from what's needed.

Suppliers need to collaborate and co-create in the way that major tech companies do, and governments need to roll ideas out in the same way that startups do... slowly until "Product market Fit" has been achieved.

But saying "We don't have all the answers" and that "We're going to test a few things on a small scale to see what works" isn't exactly a £100 million announcement to say "We'll address an attainment gap that's been in existence and unaddressed for almost 200 years."

But on the plus side... at least it's not £850 billion that the government is spending, and the money is going toward education and not those bankers! But imagine if education got £850 billion and the bankers got £100 million.

I'm off to explore the same low cost initiatives that I've been working on for the last 3 years... because I've no other option. #Cmgronabudget Lol. What impact will these ideas have? Haven't got a clue! But looking forward to finding out.