Education Scotland launched a new conversation about reading for pleasure today. Here's a brief story about how a discussion about a Digitial Citizenship Summit UK #DigCitSummitUK came about... and how much we've achieved in 3 days.


Spoiler Alert!
The hero of this adventure is: Social Media
The moral of the story is: Get Connected! ...For the Sake of the Kids!

The Beginning
Once upon a time (Cira late 2010) a Tech sales guy with a reasonable track record of project management and rolling products out called the Head of Education at "The Big Three" tech companies (Apple, Google & Microsoft) and asked "Would my experiences be enough to secure an interview"

One of the replies was along the lines of

"You say you've done all these things in EdTech, but I can't find you anywhere on Social Media"

"There's a reason for that" says he "Because I'm not on social media... I don't care what someone had for breakfast, and I don't think anyone will care what I had either" he jokes.

"Get social! If you want to work in EdTech today, you need to be on social media. It comes with the job today"

The bit in the Middle
A few conversations with social media advocates and a couple of books later and he's all plugged in. In March 2011 the first Tweet is dispatched

@mzinga Loving the advice in Social Nation...looking forward to using and passing on some of the advice and tips to our partners.

Being involved in FE at the time some lists were curated a report written in the hope of encouraging others to "Get Social."

#UKFEChat had not been established at this point but, being keen to chat about education, connections were made with other educators via Social Media.

EdChats were attended and supported (Waves to #UKFEChat and #EdTechBridge) as well as the curation of various resources for the EdChat community until more UK and FE Educators got connected. 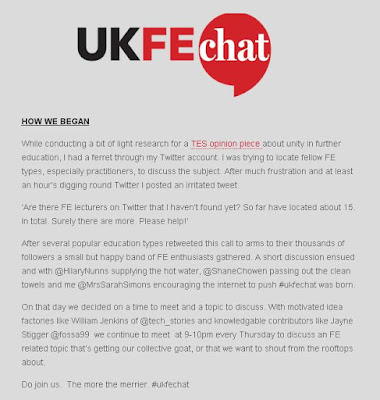 The End
Not knowing a great deal about the Scottish Education community, social media is being explored to get an idea of where things are at with the adoption of technology... and what's needed. Lot's of insights have been gained from this "Social Listening"

Over 2,400 Scottish School accounts have been curated (NB: This does not include Colleges, Universities, Government staff, 3rd sector or Education assosications or bodies). There's a good idea of what's needed to progress things.
Curating this data and reporting on this will take time (Time that may not be available... so this may not get completed), but momentum is key so finding ideas and projects that keep the discussion going are extremely important.

Last week a US connection reached out to see if a discussion about establishing a UK Digital Citizenship Summit could take place, following the success of a US one last month. 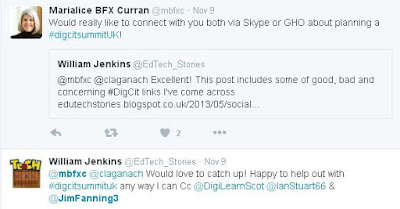 A Skype conversation took place on Monday and a venue has been identified and 13 industry experts from various sectors (and different countries) have expressed an interest in speaking at the event.

Social Media... For the Sake of the Kids
Before providing any details of this event we need to highlight 3 very important points because we understand and appreciate what all of the concerns and issues are with "getting connected"

Whether feeling social media is a waste of time, or trepidation about sending that first Tweet or "Publish" on your first blog post or considerations about all the risks, we've been there and done it. Now we see the value of it and encourage others to join the chat.

This isn't always easy, but if there's one thing that we are confident will resonate with people and encourage them to overcome these issues... It's this:


For the sake of the kids!

1) According to The BBC's "How Scotland Works" The call centre industry is worth £84 billion to the Scottish economy.

3) Hootsuite highlight that "Jobs that require Social Media skills have increased 89% over the past 2 years...btw Hootsuite's Social Media courses are free

Want to Develop the Youth Workforce? Then Get Social! ...Because it's going to be needed for a lot more jobs today and tomorrow. 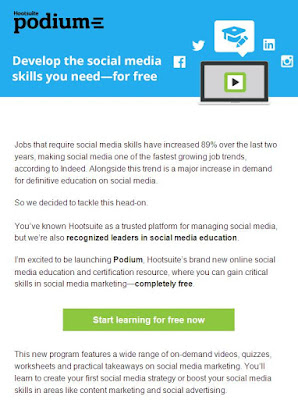 Digital Citizenship Summit UK
Myself and some of my connected educator friends are keen to pitch in and make this event happen, Larbert High School and Falkirk Council are happy to host and support this event. Thank you all so much! You all rock!

But before doing too much with this and putting a lot of time and effort in, it would be good to know who's interested in this and encourage people to discuss the idea on #DigCitSummitUK