Whether in my own kids school, in my 'world of work' (Whether formal employment or loose, informal collaboration) I've found that, to date...and frustratingly!, when an idea gets to a certain point I don't have a voice, even in small groups of people I know quite well.

No matter how accurate my insights are, or how much I care about the organisation and/or the people or the aims/goals/strategic objectives... It's like shouting in a storm.

It has not always been 'okay,' but today it's more than OK... It's ideal! One of the aims we are currently working on is to

"Let quiet people know that they can have a voice and that they can make a difference"
As fortune would have it I spotted this article that IntrovertDear Tweeted out yesterday:

Today we are in agreement with Steve Wozniak's advice in Susan Cain's book Quiet that it might be an idea to work alone.

"Most inventors and engineers I've met are like me - they're shy and they live in their heads. They're almost like artists. In fact the best of them are artists. And artists work best alone where they can control an inventions design without a lot of other people designing it for marketing or some other committee. I don't believe anything really revolutionary has been invented by committee. If you're that rare engineer who's an inventor and also an artist, I'm going to give you some advice that might be hard to take. That advice is : Work alone.You're going to be best able to design revolutionary products and features if you're working on your own. Not on a committee. Not on a team." Steve Wozniak via Susan Cain's Quiet

And then hand projects onto others who are heard once you've played to your strengths.


If you read Steve Wozniak's book you will hear stories like Steve Jobs agreed to share money with Woz 50/50 but then said that he got $1,000 for the work and gave Woz $500.

When in reality he got $2,000 and so it was a 75/25 split... While it being a stitch up and him being lied to  wasn't very nice, without this partnership would Woz's ideas have come to life without Jobs?

(And would Jobs and Wozniak have met if it wasn't for Tech Visionary Stewart Brand* providing the funding for the Home Brew Club where they met?)

*Don't do drugs kids... drugs are bad! But feel free to change the world, twice if you can ;)

I Don't Have a Voice... Even with People who Pay Me?!
To give just two examples from people who decided to pay me for my time:

1) An employer I worked with for 10 years and excelled in every single role/department I worked in. I told him that I recognised what Jim Collins called the '5 Stages of Decline' in his book 'How the Mighty Fall'

I felt that his org was at around 'Stage 4.' This news was not welcome! And was ignored.

12 months later? He had to downsize the company making 20 hard working dedicated members of staff redundant. I shared the same email with him and some colleagues from 12 months earlier.

MD response? He said nothing.

Colleagues response? "You sent this to the MD? Your braver than you look! You're braver than I am! It's like the author of this book was sitting in the office watching this unfold"

2) I was asked to detail my career aims and how I would implement a project by a company interested in hiring me.

I did this and when leaving the company I asked what there was about what I sent before starting with them what was different to the way I tried to implement projects?

The answer? Nothing... We just didn't realise what was involved.

I Don't Have a Voice... With Online Collaboration (Or with my own ideas?!)
Realising that my sales, startup and (Limited) #Cmgr experience was useful in the planning and 'Community Activation' stage to get momentum, I aligned with people and groups that do have a voice.

First with people at the grassroots level in education through EdChat Moderators and later with authors looking to build momentum and community with their books.

After 6 years on Social Media (The first acct I opened was in 2011), I joined a webinar and asked

I wrote a follow up to this after my #DigCitSummit and #CEduAD expereinces... When I was ready to quit social media.

"There is a real skill to effective engagement for suppliers on social media. Any attempt to treat social media as a one-way corporate broadcast will not win any friends or influence any influencers... building relationships through authentic two way engagement is the only way to go"

"Social media has changed the sales process and anyone who has the view that sales people are the "slick snake oil" type of sales people who you believe will say whatever it takes to close the deal, then you may be surprised at how similar the new social models of selling are to developing and executing lesson plans.
This process is one of the core messages from John Golden's book, he advocates the following model"

I have tried to follow this model through research, listening and sharing.

The image below shows how 16+ projects that I've been involved with come together to see the last 2 aims of the #SeaTurtlePirates adventure comes together:

1) Implementing ideas from the early online community The Well and following the advice of people like Stewart Brand (The Man who Changed the World Twice), Howard Rhiengold (Virtual Communities) and Marc Smith (Voices from The Well), among others.

In particular to seeing a return to 'The Well's' mantra of #YOYOW... Although we've pirated/hacked/rebooted The Well's mantra to include the #YOYOWJOI Compass)

(My 2015 #DigCitSummit Closing Remarks were on this topic...A few months ago I updated thoughts from this post to take into account the changes on social media) 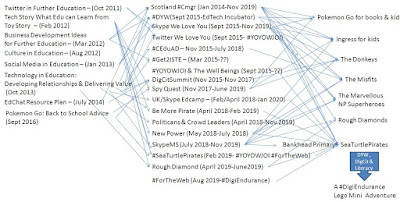 You'd think that given all the problems with these two areas... the people who said during GE2015 'What can we do about online abuse' are now saying 'Tech companies can no longer turn a blind eye'

...But do nothing to reign in their own support base, would be clambering all over someone with a track record like this and working on these areas, especially as their is a kick ass attainment gap story to be had too.

Sadly no! Either they are short sighted and lack vision or I don't have a voice... So I'll work alone for a while to develop these things. Hopefully we'll find 'Economic Dignity' and help promote Cmgr as a career here in Scotland.

Social Media Doesn't want you to have Economic Dignity & Cmgr in Scotland
Experienced Community Managers will tell you that one of the best ways to get work in community management is to be an active member of the community... While this has worked on occasion this is tough in Scotland.

I was told in 2010 by a tech executive at a major tech company that if they were hiring anyone they would look for their digital profile and 'Why can't I find you?'

When I saw there was a business case for being on social media I got connected... and had some early wins (If you are happy to be paid in smiles).

Jaron Lanier's book highlights how you will get some early wins - and cites the Black Lives Matter movement as an example - but after these quick wins movements lose ground and slip backwards (Compare black lives matter's success with the raise of the Far Right).

Another of Lanier's arguments for Deleting your Social Media Accounts right now, it that 'Social Media doesn't want you to have economic dignity,' and whether looking at films like 'Sorry We Missed You' or the amount that I've done in an unpaid capacity it sure seems like a whole lot of 'Devil and the Deep Blue Sea'

...Or you give a whole lot of time and creativity away in the hope that you will be one of the hundreds/thousands of people all looking for attention of the few companies who actually have any money these days.

The advice I was given was 'Get on Social Media, it comes with the job today'

The advice I would give to my kids is 'Don't get on social media until you have a voice... Go on The Apprentice and then spout your controversial views like Katie Hopkins does'

Otherwise, follow the example of The Well and working in small communities of practice with what Howard Rheingold calls a 'No Asshole Rule'

I'm going to continue to work on some ideas that I KNOW have value and develop them until those who do have a voice and influence will take them on. The aims here will be to

2) Cut a path to find 'Economic Dignity on Social Media

3) Explore where Community/Ambassador programs are headed... Changes ARE on the way in edu at least!!

4) Lower the barrier; flatten the path for others re the last two goals I'm exploring

5) Try to help provide in-demand skills for my own kids... and hope it helps others.