What If... You Don't Have a Voice? Keep Telling Your Story (Part 2) 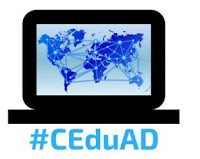 
Startups are messy... Iterating your way to Product Market Fit means that you'll hit a lot of dead ends and may need to 'pivot' and head in another direction.

"Even only one in ten venture-backed startups succeeds, and venture capitalists turn down some 99% of the business plans they see" Dave Feinleib, Why Startups Fail

"EdTech is tough! We advise our students not to go into Edtech becuase it's a tough space to become a market leader" MITs Bill Aulet in a conversation I had with him in 2010

"Get on Social Media... It comes with the job if you want to be in EdTech today"
Was the advice from a Microsoft executive when I spoke to them in 2010.

However, as "Why Good People Turn Bad Online" highlights social media is still only 20 years old and,

"We've had thousands of years to hone our person-to-person interactions... we have facial cues and body language, but online we only have text... as our online behaviour develops we may discover digital equivalents of facial cues to help smooth online discussions"

Furthermore, as New Power (@ThisIsNewPower) highlights with things like the Reddit Revolt and Reddit Place, people and spaces online can and does have it's childish and adolescent phases... just take a look at the world of politics if you want examples of grown ups behaving like petulant children and stroppy teenagers! With their constant "He said, she said" and "Our shiny badge is a better colour than your shiny badge"

So being part of messy startups in EdTech on social media sure is an interesting place!

Love it or loathe the campaign and the reasons for it, but Colin Kaepernick did lose his livelihood for standing for something he believed in and the Nike campaign


"Believe in something even if it means sacrificing everything"

Resonates with me as the goals I was working towards were what Jim Collins called "Big Hairy Audacious Goals," I knew the risks and the chances of success... But gave it a go anyway, dumb 'Optimism Bias!'

I ended up sacrificing a great deal and am calling it a day... But not before (Finally) getting a chance to tell the story I wanted to tell.

What did I believe in?

"Identify your core values and then align them with a noble cause" Dave Logan Tribal Leadership
In 2010 I set my mind to either working at a hot shot Silicon Valley Startup or one of the "Big Three" (Microsoft, Goolge or Apple).

Thanks to James Stanbridge (@Stanbridge), who I met as a result of Sarah Thomas' (@sarahdateechur) SXSW Digital Diversity Minority Women in EdTech session, I achieved that goal by working with Declara for a few months.

As for the big 3? Came pretty close! In 2010 I managed to have a conversation with a Microsoft exec and his advice to me was


"Get on social media if you want to work in edtech... It comes with the job today"

The email I sent to this exec can be found in the following post, writing from 8 years ago is cringeworthy, but I share here to show how close it seemed to be (Those who know me should also see some consistency too)
In August our home got repossessed and we had to present ourselves as homeless. When what you've sacrificed gets to that stage... you most definitely need to call it time and set some new goals!

So for the last few weeks I've been wrapping up a few projects and this includes pitching in with one more attempt to establish a "#CMAD for Edu" event.

After being told to "Get on social media if you want to be in EdTech" I attended an entrepreneurial marketing workshop with Bill Aulet in 2011, I read 8 out of the 10 books on his recommended reading list - Crossing the Chasm, Made to Stick, Inbound Marketing - among others.

My first ever tweet led to me collaborating with Barry Leibert, author of Social Nation, and Twitter in Further Education was first attempt at research/content marketing.

This report was written in my own time and people were telling me that my phone calls and emails through the day were unwelcome... but please keep sending the stuff that I shared in the evening.

Although I read Crossing the Chasm and Inbound Marketing etc, something was missing from my vocabulary... then during BETT in 2014, I found out what it was. 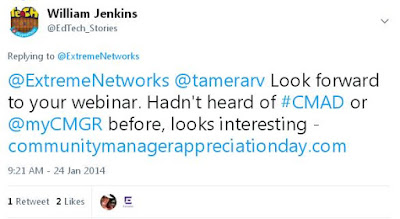 Over the course of the next few years I would join and learn SO MUCH! from CMAD and #Cmgrhangout.

Whether a good, bad or indifferent week... Friday at 7pm was just THE BEST way to end the week. The amount of learning that took place! And the fun too!

When you speak to connected educators and ask them how they get on with encouraging more educators to get connected the answer is always the same... that a little more hustle is needed!

I've felt for a long time that a "#CMAD for edu" could really help with this. I made a couple of attempts with this over the last few years

#CEduAD 2015
In 2015 I thought that, again following the lead of Tim McDonald with No Kid Hungry, suppliers could put a twist on Black Friday and #GivingTuesday by offering discounts and goodies on this day to their advocates to thank them for all they do.

This could be free tech, contributing to their #Get2ISTE funds, discount codes to people in their PLN etc.

We had a few people sending out messages of appreciation to people in there PLN and Edchat Moderator and Edcamp Kansas organiser Tim Vesco (@mrvesco) also dedicated his chat to this topic too.

#CEduAD 2016
One of the things that I've been a huge advocate in the last few years is for greater collaboration between all education stakeholders (And the topic of my first blog post).

I came up with the idea of #StartupEduChat and supported #EdTechBridge when I heard about their #SXSWEdu session. I still very much believe in the idea of the Greenwich Village of EdTech

In 2016 I was trying to get more Scottish Educators to make that all important first Skype call.

With time being tight the idea in 2016 was to encourage Educators and EdTech companies to connect with one another... have a Skype call and talk about their "Why"

Just connect! Get to know one another... No sales, no agenda, just have a Human-to-Human conversation

A couple of people did this, including Michael Sinclair who worked at Sumdog at the time. Yesterday he mentioned this Skype call during his first #PassthePeriscopeEdu video. 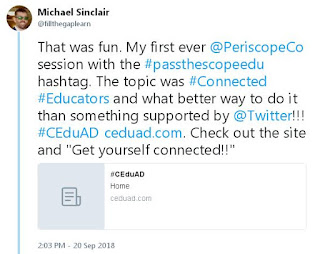 #CEduAD 2018
As I am moving on from education I have been handing anything that I have felt was of interest/worth exploring further with others... and has included seeing if a proper CMAD/Cmgrhangout inspired "Connected Educator Appreciation Day" event could be established.

Next month, thanks to Andrea Tolley, (@TolleyA), Michael Sinclair (@Fillthegaplearn) and a few other educators there will be #CEduAD modeled along the lines of #CMAD... With Master Community Builder Tim McDonald (@tamcdonald) providing his #Cmgr awesomeness.

I highlight at the start of this post... startups are messy. EdTech is tough. And social media is still quite new. ...Throw them all together and ideas like this will take time and evolve.

I know that a few true innovators in education who are struggling a little, so thought it might be highlighting a couple of messy startup things that may not be obvious regarding trying to make new ideas and projects happen.

The seed of the idea, for me as far as #CEduAD 2018 is concerned started off when I "Did a 5min favour" by reaching out to some people because a group I was connected with was organising an event in April but, as can be the case... things didn't work out as intended, hoped or planned.

So we 'Pivoted' and explored how we could use the energy and enthusiasm of those that were interested in creating something.

We looked at doing what Edcamp Kansas does... They have Edcamps on the same day, so we considered hosting a US Edcamp on the same day as a UK one - using Skype to connect and collaborate, but this ran into a few challenges as well.

I've been working on the same ideas since 2010. The things that I've felt are needed have remained unchanged since 2015. (See EdTech is Tough... Welcome to Scotland)

In November 2017, after watching a webinar with Tim McDonald I wrote a post based on the question I asked

Mr Swinney's keynote seemed no different from Mr van der Kuyl's but how much has REALLY changed with these things?

If Mr Swinney is interested in three kids experiences of how much of an epic fail the #AttainmentGap initiatives are going from 2015-2018, please do let me know... I would be happy to hook you up with them!

Equally, want to know how tough is EdTech?

How easy would it be if education stakeholders came together, connected with purpose, collaborated and learnt from one another? I think people would be surprised!

If they wanted to find out they could ask Michael Sinclair and then find out on the 20th Oct.

I've done my best to tell my story, I said it in as many different tones and to as many groups as I possibly could. I've sacrificed a good deal in trying to tell it.

I'm EVER SO GRATEFUL to everyone who I've met on my messy EdTech, startup social media travels for all their time... and I will NEVER forget the kindness of those who provided rest for a weary traveler.

I hope the people that I've connected with will support the Connected Educator Appreciation Day organisers prior to the event and will join the movement to help get the unconnected plugged in while celebrating the value of being a connected educator.


Connected Educator Appreciation Day is on the 20th October. 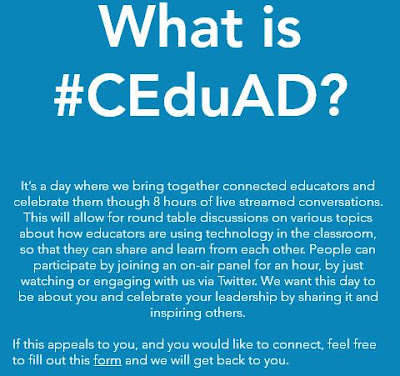 Posted by William Jenkins at 01:43