The Greenwich Village of EdTech

In her timeless classic "The Death and Life of GreatAmerican Cities" Jane Jacobs argues for cities to be developed in a way that encourages diversity... and to embrace chaos.

I read this book years ago when I was preparing for a course on Understanding Cities, and it's one of those books that stays with you. An example that I remember vividly is;

"When Jimmy Rogan fell through a plate-glass window (he was separating some scuffling friends) and almost lost his arm, a stranger in an old T shirt emerged from a bar, swiftly applied an expert tourniquet, and, according to the hospital’s emergency staff, saved Jimmy’s life. Nobody remembered seeing the man before and no one has seen him since. The hospital was called in this way: a woman sitting on the steps next to the accident ran over to the bus stop, wordlessly snatched the dime from the hand of a stranger who was waiting with his fifteen-cent fare ready, and raced into the Ideal’s phone booth. The stranger raced after her to offer the nickel too. Nobody remembered seeing him before, and nobody has seen him since"

Jacobs goes on to highlight what made this encounter happen was the chaos and diversity of the neighbourhood... Different buildings in close proximity - flats, offices, shops, restaurants, theaters and cinemas - the area is busy day and night.

The daily rhythms of neighbourhoods like this mean that there is always life on the street, there's the constant hustle and bustle of people occupying the space. There may be different actors on stage to set the scene, and the lighting may change... but the curtain never drops, the city never sleeps.

This is followed by office workers and parents and kids on the school run before parents with pre-school kids head off to the library, museums and parks. At mid-morning coffee shops might do a brisk trade with tourists, office workers, pensioners and the occasional aspiring writer... And so the scene goes for the rest of the day.

Jacobs argues that this diversity and chaos is a good thing, there are always eyes and ears on the street and, as a result, the area is self-policing.

Take a look at the house prices in these areas, these are the kind of neighbourhoods people want to live in. Vibrant West End places like New York's Greenwich Village are at a premium (Btw did you know that the reason "the west end" in most UK cities are more affluent is because the wind blows in an easterly direction, so during the industrial revolution the air was cleaner in the west Vs all smog in the east). Would you feel safer in this kind of environment than other streets in the city? 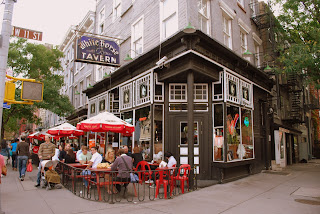 Compare how safe you would feel in a diverse and chaotic scene like this late at night with a city street that was deserted and devoid of life... or with only one or two other people around.

Even if we were to swap this desolate scene with a gated community where you'd be safe enough, the street may not be as interesting as it too could be devoid of life... The neighbourhood would be more homogeneous, a group of people who mostly work 9-5 so the streets are quiet through the day and, when they do get home, opting for a gated community may mean that they like their privacy and/or live in fear of others so don't mix a great deal and isn't a fan of chance encounters.

Jacobs' message for people who are trying to create order in cities is that this has consequences. In the case of gated communities it can mean that segregation can become a self-fulfilling prophesy as "othering" develops and creates an "us" and "them" mentality... How safe does this "order" make things? in some developing countries the issue of gangs kidnapping wealthy children who live in gated communities for ransom can be an endemic issue, and becomes a constant fear.

Moving Out or Fixing Up... Unslumming
When migrants move to a new country or city they invariably start life in the poorest neighbourhoods. As they begin to prosper the inclination is for them move out to nicer areas, the poor and vulnerable stay and live with the next wave of immigrants which is why we get a melting pot of different cultures as older migrant residents share the space with new arrivals in the poor areas.

Those who can move out create what has been dubbed as "The Big Sort" which is why we end up with homogeneous groups in the city... some are locked away in their gated communities; others trapped in their poverty.

Jacobs provides details of how two cities - Boston (North End) and Chicago (Union Stock Yard) - were able to "unslum" which helped prevent "Othering." What happened here was instead of the Irish and Italian migrants moving away to nicer locations the people who started to prosper said "This is our neighboughrhood, we're not moving... we're going to fix the place up instead."

This had the effect of creating the kind of diversity that Jacobs recommends, people with different jobs and incomes, different routines and daily rhythms making the streets vibrant, interesting, safe and enjoyable. The fear of threat about people who were "different" didn't materialise... there was no development of any "us and them" mentality.
Online Communities
What has this got to do with anything remotely related to online communities or education?

In the main #EdChats are attended by educators, as a non-educator who joins a number of EdChats, I am totally aware that other stakeholders are more than welcome to join in EdChat sessions... I am always extremely appreciative of the reception and engagement I have with educators, I always learn lots from the interaction. I also believe that (on occasion) my tweets, ideas and ramblings are of interest too.

But how inviting are EdChats to developers? Could there be any "us" and "them" issues that makes people a little uncertain;
In 2012 there was a documentary "Make Bradford British" which followed Brits from different races and backgrounds in the city. This program tracked the destinations of Asian and White taxi customers, the places that each group visited were very different... there were very few shared spaces and very little mixing/interaction between each group. This led to each group making generalisations, stereotypes and misperceptions. Does the same happen on Twitter? Take a look at some of the traffic from this article

I'm not sure how valid these suggestions about non-educators and EdChats are but, what I do know, is that I don't see as many EdTech developers as I might have expected mixing with educators in some EdChats, or maybe they do tune in but just listen in on the discussion.

If it's the case that developers and edu entrepreneurs don't tune in, will this be due any issues of "us" and "them"? If this is the case, what are the consequences? Is each stakeholder left with the perception that;

Educators: "EdTech is rubbish... promises much but fails to deliver"
EdTech: "Educators so difficult to engage with and get feedback from"

If so you can see how this could easily become a self fulfilling prophesy... without educator input the EdTech suffers, which confirms educators assessment that a lot of EdTech isn't worth the time or effort, developers then find it harder to find partners, which leads to more bad EdTech, so veiws become even more polarised.

Going by some of the comments from the first #EdTechBridge chat, it appears that this can be an issue sometimes. I liked Scott Freschet idea for a future topic.

Now the neighbourhood that is education is changing and some kids are moving to other areas whether to private schools, charter schools or home schooling.

In the old neighbourhood residents want change, some want to restore old buildings to their former glory, others want to renovate so the buildings retain their character but want to upgrade the interior... others want to build schools of the future.

I'm no architect or town planner so I'm not sure which blueprint is best... but one thing I do know is that its time to knock some of the walls down and build bridges so that others who have an interest in EdTech can see if they are able to help out... and #EdTechBridge has got the wrecking ball rolling/swinging. (Note to self... Should I include Simpsons image or Miley Cyrus? Lol)

I've put a list of people who participated in #EdTechBridge, so to keep the momentum going why not take a moment to;

1) Check out this #EdTechBridge list
2) Reach out to some of these educators and entrepreneurs who are keen to collaborate
3) Invite them to any EdChat or EdTech developer communities you are involved with.
4) Encourage your educator, entrepreneur, student, parent and policy maker followers and contacts to check out the #edtechbridge hashtag and to get involved with the discussion - it might get chaotic because of the diversity but Jacobs highlights that this is no bad thing

If you are interested in helping to develop this community why not check out #Cmgrhangout on Friday at 2pm EST/7pm GMT as topic is "So you want to grow a community?"

Posted by William Jenkins at 22:11