Shackleton's leadership style was formed when working under people like Scott and vowing not to treat men they way he and his crew mates were treated. What he hated most about these jobs were pettiness, irresponsible bosses, insufferable working conditions and a lack of trust and respect among crew members. In the early expeditions which he led he learned that leadership that was rigid, remote, undemocratic, and uncertain didn't work. On the Endurance he focused on the one thing that that gave the best chance at reaching their goals: Unity"

On Boarding The Crew
3rd October: The inaugural Digital Citizenship Summit  is hosted

9th November: I share a post about digital citizenship with one of the organisers, they ask if myself and author of the post Malcolm Wilson can arrange a Skype call to discuss a UK Digital Citizenship Summit

16th November: Myself and the organisers arrange a to have a Skype call

30th November:  In the week that was kicked off with the inaugural Connected Educator Appreciation Day we got the support from these awesome people:

7th December: We have selected a venue which will be announced at 5pm today when the deadline for speakers ends. We already have over 50 speakers interested (Subject to availability when the date is announced... and funding).

We also have over 130 people ready to get involved in various ways.

Sign Up...
If anyone is interested in joining this event, simply read the information below and then just find something to do as and where you can. We have a series of 4-5 "20 second favours" that could make a big difference. 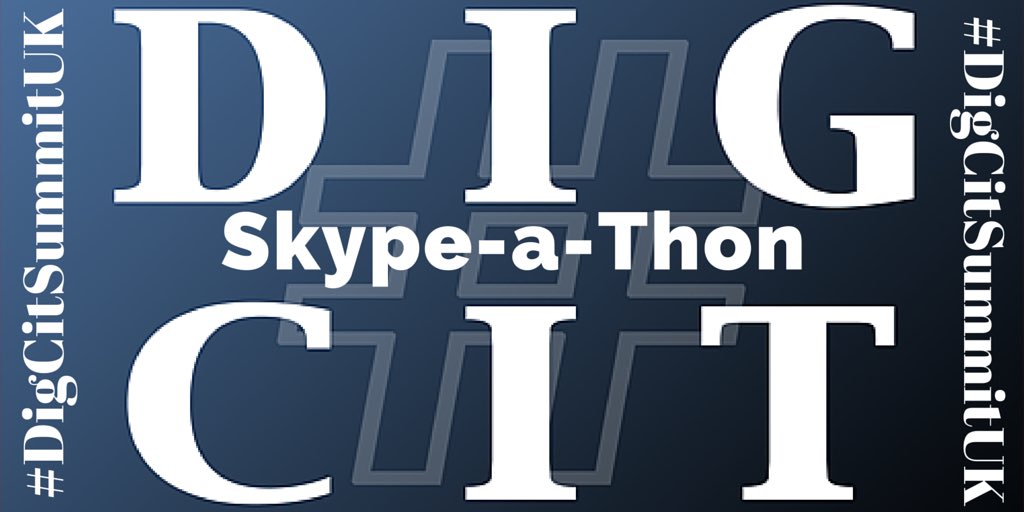 Today (Monday 7th Dec) this included share the last call for speakers: Date & Venue Survey and any details the organisers share about the event on Twitter.

5) Send some love to any of the companies on this list that you use. I understand that Educators are particularly keen to see Skype, Twitter, Voxer and Periscope involved and various people are engaging with their contacts at these companies.

Ships Articles
I dug out my copy of Life Among the Pirates and was surprised to find that the model that pirates used was extremely similar to the framework that I have been using as I make plans for my own startup, which is to:

"Identify your core values and align them with a noble cause"

Democracy
The most significant difference between pirate and other ships was the manner in which the pirate company was organised, and the code by which the pirates operated. Unlike the Royal Navy, the Merchant Navy, or indeed any other institution in the 17th and 18th Centuries the pirate communities  were democracies. A hundred years before the French Revolution, the pirate companies were run on lines which liberty, equality and brotherhood were the rule rather than the exception. In a pirate ship, the captain was elected by votes of the majority of the crew and he could be deposed if the crew were not happy with his performance. The crew, and not the captain decided the destination of each voyage and whether to attack a particular ship or to raid a coastal village. At the start of voyage, or on election of a new captain, a set of written articles were drawn up which every member of the ships company was expected to sign. These articles regulated the distribution of plunder, the scale of compensation for injuries received in battle and set out the basic rules for shipboard life and the punishment for those who broke the rules. The articles differed from ship to ship but they followed similar lines.


First Council: Preperation
One of the earliest descriptions of the pirates code of conduct appears in Exquemelins Buccaneers of America, which was first published in 1678. Exquemelin tells how the pirates called a council on board ship before embarking on a voyage of plunder. At this preliminary gathering it was decided where to get hold of provisions for the voyage. When this was agreed, the pirates went out and raided some Spanish settlement and returned to the ship with a supply of pigs augmented by turtles and other supplies. A daily food allowance was then worked out for the voyage: Exquemelin notes that the allowance for the captain was no more than that of the humblest mariner.

Second Council: Setting Sail
A second council was then held to draw up the code of conduct for the forthcoming voyage. These articles, which everyone was bound to observe, were put into writing. Every pirate expedition, in common with most privateering expeditions, worked on the principle of "No prey, no pay."

The first requirement of the articles to determine exactly how the plunder should be divided when the pirate had their prey. The captain received an agreed amount for the ship, plus a proportion of the share of the cargo, usually five or six shares. The salary of carpenter or shipwright who had mended and rigged the ship was agreed at 100 or 150 pieces if eight, and the salary of the surgeon was 200 or 250 pieces of eight. Sums were then set aside to recompense for injuries.

Early Medical Insurance
It is interesting to observe how this early form of medical insurance determined the value of different parts of a pirate's body. The highest payment of 600 pieces of eight was awarded for the loss of a right arm; next came the loss of a left arm at 500; the right leg 500 but the left leg 400; the loss of an eye or a finger were rewarded with a payment of 100. Once these sums had been agreed, the remainder of the plunder was divided out.

The master's mate received two shares, and the rest of the crew received one share each. Any boys in the crew received half a share. The buccaneers were insistent that no man should receive more than his fair due, and everyone had to make a solomn oath that he would not conceal and steal for himself anything in a captured ship. Anyone breaking this rule would be turned out by the company.

Change of Leadership
The application of this code can be observed in the journal of Basil Ringrose. In July 1681 they captured the Spanish San Pedro off the coast of Chile. She was laden with wine, gunpowder and 37,000 pieces of eight in chest and bags. "We shared our plunder among ourselves" Ringrose noted "Our dividend amounted to the sum of 234 pieces of eight to each man.

"A man of undaunted courage and of an excellent conduct."

He was a natural leader, and was skillful at the practical and theoretical aspects of navigation, bit in January 1681, following weeks of storms and hardships, the men became mutinous. By a majority decision they deposed Captain Sharp and elected John Watling, a tough seaman and a former privateer. Sharp was compelled to relinquish his command and the crew signed a new set of articles with Watling. Three weeks later Watling was killed during an attack on a coastal fort, and Sharp was persuaded to resume his command of the expedition.

Battle Plans
Johnston's General History of the Pirates describes the similar role of the pirate captains in the early years of the 18th Century. As with the earlier buccaneers, the captain had absolute power in battle and when 'fighting, chasing, or being chased' but in all other matters he was governed by the majority wishes of the crew. Although he was given the use of the great cabin he did not have it exclusively to himself, but must expect that other members of the company to come in and out, use his crockery and to share his food and drink.

Infighting
The captains authority was further limited by the powers which were given to the quartermaster. He too was elected by the crew, and is described as being 'a sort of civil magistrate on board a pirate ship' He was the crew's representative and 'trustee for the whole.' His job was to settle minor disputes, and he had the authority to punish with whipping or drubbing. He was expected to lead the attack when boarding a ship, and he usually took command of captured prizes.

The pirates had no use for the ranks of lieutenant or mid-shipman, but they did elect men to do the jobs carried out by warrant officers and petty officers on merchant ships and naval vessels. In addition to the quartermaster, most pirate ships had a boatswain, a gunner, a carpenter and a cook; there was usually also a first mate and a second mate.
Bartholomew Roberts Pirates Code
Several examples of the articles are drawn up by the crews of different pirate captains have been preserved. Those adopted by the men led by Bartholomew Roberts are the most comprehensive, and are worth quoting in full because the provide a revealing slant on the pirate's way of life. These are taken from Captain Johnsons General History of the Pirates

I. Every man has a vote in affairs of moment; has equal title to the fresh provisions, or strong liquors, at any time seized, and may use them at pleasure, unless a scarcity makes necessary, for the good of all, to vote a retrenchment.

II. Every man to be called fairly in turn, by list, on board of prizes because, they were on these occasions allowed a shift of clothes: but if they defrauded the company to the value of a dollar in plate, jewels, or money, marooning was their punishment. If the robbery was only betwixt one another, they contented themselves with slitting the ears and nose of him that was guilty, and set him on shore, not in an uninhabited place, but somewhere, where he was sure to encounter hardships.

III. No person to game at cards or dice for money.

IV. The lights and candles to be put out at eight o'clock at night: if any of the crew, after that hour still remained inclined for drinking, they were to do it on the open deck.

V. To keep their peace, pistols, and cutlass clean and fit for service.

VI. No boy or woman to be allowed amongst them. If any man were to be found seducing any of the latter sex, and carried her to sea, disguised, he was to suffer death.

VII. To desert their ship or quarters in battle, was punished with death or marooning.

VIII. No striking one another on board, but every man's quarrels to be ended on shore, at sword and pistol.

IX. No man to talk of breaking up their way of living, till each had shared £1,000. If in order to this, any man should lose a limb, or become a cripple in their service, he was to have 800 dollars, out of the public stock, and for lesser hurts, proportionately.

X. The captain and quartermaster to receive two shares of prize: the master, boatswain, and gunner, one share and a half, and other officers one and a quarter.

XI. The musicians to have rest on the Sabbath Day, only by night, but the other six days and nights, not without special favour.

What will be the Ships articles for this event? Will everyone sign up to whatever code that everyone agrees with? Who knows... tune in next week to see what happens. With 6 weeks to go it is definitely going to be a case of sink or swim.