The Problem with Gazelle

In group situations, the presence of a blocker can actually make the decision making process more rational and less likely to go off the tracks. It gives us a new appreciation for someone who tends to play “devils advocate” ...Although no one is likely to win a popularity contest by playing the devil’s advocate, businesses would do well to respect a dissenting opinion – if not straight out encourage someone to take on such a role. The dissenter, of course, is as likely to be wrong as anybody else, but the discussion of the points made by the dissenter can add perspective to the debate. Sway

The comment above is one that I would encourage anyone who works in FE to bear in mind as they read this post. The observations in my next few posts may upset some people and groups within FE, but I feel what I have to say needs to be said. I don't feel that I have been heard regarding some concerns when I've tried to reach various people and FE groups, so I thought I'd publish my views on my blog. Here are my observations regarding Gazelle, based on what I have seen.

June 2011: I shared the research that I was working on about the importance of innovating during a recession with a senior member of staff who had ran a cool campaign on social media to raise revenue for the college.

January 2012: Gazelle was formed. When I heard about this I tried repeatedly to engage with the organisation, but any emails or Tweets regarding Gazelle went completely ignored.

February 2012: I published my Business Development Ideas for FE report  which I felt was relevant to the organisations aims.

March/April 2012: I was asked by members of SMT who read this latest report if I was aware of Gazelle. I said that I was and that I had tried to engage with the organisation on a number of occasions… but had given up trying.

June 2014: Gazelle comes under fire as it is found to be “An expensive initiative which had little Educational impact” in this article: Colleges under fire on Gazelles £3.5 million.

What a Success?
£3.5 million? Could you imagine the outcry if this was a private company who lost this amount in a sector that is crippled with budget cuts?

But some in FE are defending these costs, some are even hailing it a success? Why is it a success? Why are the people who are teaching students to be entrepreneurial losing a small fortune? Should we be concerned about the quality of the enterprise programs they teach? (I understand that some current enterprise initiatives insist that you attend college in a suit every day... The dress code doesn’t seem to have much of an influence on the level of innovation in Scilicon Valley!)

"He who takes advice about his savings from one who is inexperienced in such matters, shall pay with his savings for proving the falsity of their opinions" The Richest Man in Babylon

Enterprising Colleges
If you read the introduction of my Business Development Ideas for FE report, you will see that I 100% believe that enterprise has a role to play in education. Who wouldn't when you see that the companies that MIT alumni start generate as much as 11th richest country!

I do not think that entrepreneurship is suitable for everyone but, as Inc Magazines article “The Psychological Price of Entrepreneurship” demonstrates it’s a tough lifestyle even for the successful ones! But I do think the core values and skills that enterprise programs develop are valuable in today's economy (See Selling Education).

Product Market Fit
Where I feel things went wrong was that the program was either rolled out too early and/or the implementation of these enterprise programs wasn't quite right. I have researched the roll out process in technology, which includes looking at how major companies iterate their way to "Product Market Fit" this confirmed that I was right to be concerned with the issues that I had tried to raise.

Questions should be asked regarding the roll out process and what these enterprise initatives did to achieve “Product Market Fit,” if for no other reason than to prevent this from happening again in the future.

I've spent a few years looking for an idea that had the potential to be rolled out in FE and, after two years, have only just realised what one of issues has been! Even Google, Microsoft and Apple don't get it right first time... they cycle through new ideas and then latch onto the right one.

Who?
As a fan of the leadership styles that Jim Collins, Adam Grant, Susan Cain and others advocate, I find the different approaches that people come at the same problem with fascinating. With Gazelle we had some big personalities come sweeping in with some grand plans who stamped their name all over the program. 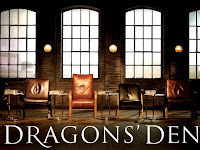 In a sector where budget cuts were starting to bite, I did find some of the methods used rather curious. Is it just me that thinks if an entrepreneur had a commitment to a particular sector that was struggling with budget cuts, wouldn't the obvious thing to do be to help find additional revenue streams?

Or were these people the kind of "rock-star celebrity leaders" that Jim Collins talks about, "Whose deepest ambition is self-centric." Were these celebrity leaders more interested in their next TV appearance and book deal than getting their sleeves rolled up?

Or maybe it was that these entrepreneurs whose advice was sought actually didn't know how to help? Was it that they made their money under different economic conditions? I highlighted at the time that one popular entrepreneur who runs a chain of luxury gyms had opened 2 gyms in the same space of time that the no frills "Gym Company" had opened 60 new facilities.

What?
Then there is the concept of what these courses look like, I went along to an open day and interview for one of these courses. I found some of the ideas quite surprising, and wondered if these practices were part of MIT, Stanford or Harvard’s curriculum.

Where?
Where should the early pilots for an FE based entrepreneurship program take place? At the end of my Business Development Ideas report I included a comment from a college that is one of the least dependent on government funding, were colleges like this one involved with these enterprise initiatives? If not, why not? Why would the most enterprising colleges not be leading on the FE enterprise agenda?

When?
During a recent discussion with a principal in another area of education I realized the extent to which that educators were not aware of the tried and tested roll out process that major tech companies use… the implications of this lack of awareness would appear to have some far reaching implications.

One of these implications might be that initiatives can tent to get rolled out too early and end up costing millions, with questionable results. This is a common issue when there is a lack of due diligence, as Geoffrey Moore highlights in “Crossing the Chasm” (See P40-42). 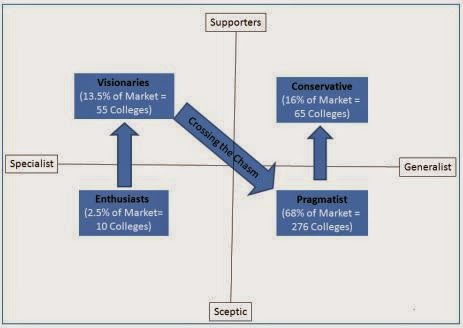 In my Business Development Ideas for FE report I put forward some projects that came in at almost £12.5 million. Now, as anyone will tell you during the “Product Market Fit discovery process,” there is absolutely no idea how feasible these ideas might be or how realistic the projections... but they most certainly would not have cost £3.5 million because;

If any plans failed they would have "Failed Cheap and Failed Fast," while any success would have been rolled out at a steady pace.

What does this experience tell me? It tells that whether you’re an educator or an EdTech developer that getting the implementation process right is VITAL to success of any idea. More on this topic to follow in future posts.
Posted by William Jenkins at 10:00