After spending the last 6 weeks blogging about the Scottish Independence Referendum I find myself getting drawn into the murky world of politics again... and contemplate the value of doing so.

As many of my education followers will be aware I took a departure from my usual content with getting involved with the Scottish Independence Referendum. The reasons for this was not due to any political beliefs but because of the cultural conditions that the referendum helped establish.

However, a lack of leadership by the SNP/Yes Alliance killed the momentum and, along with it, the opportunity. I remained involved longer than I should have. The conditions that had peaked my interest with the change agents and optimists coming together got replaced with the moaners. I got so caught up that I hadn't realised the change and had joined the moaners.

For example, compare the post that I wrote on the day after the Independence Referendum with my last post:

A Pre-Occupied Mind
Just as I decide to stop writing about politics, I find myself getting drawn in again and for the same reasons as I did with the #Indyref... Not because of politics, but because of the concerning practices and because of the potential for change.

Reading reports about the Tarpaulin Revoluion, the events taking place are very concerning (Which, contrary to the BBC's "The Revolution will be Televised," it most certainly won't be!). But whether to get involved, or not?
All of this is ironic given ITV Tonight show this week asked "Is Britain Happy" and included soundbites from David Cameron, and his desire to increase the nations happiness. Surely listening to, instead of arresting people for nothing, would be a pre-requisite.

My interest is with reform in education and, in particular, social mobility. I realise, after much frustration, that UK education is too complex and/or senior managers have become too politicised as I've had more success in the US compared to the UK.

This was part of my reasons for getting involved with #The45Plus, I thought there might be another way to implement some of the ideas based on what's worked in the past... and possibly on a larger scale.

Some activists and "cybernats" found it bizarre that I would enter political discussions when I had no time for party politics. While I did write over 30 #indyref based posts in a month, the majority of these posts were based on how to develop the right culture that would allow #The45Plus to gain momentum and make some real change...with or without politicians!

Unfortunately the culture was not carefully cultivated and "The Moaners" moved in, led by some angry publicity hungry politicians. Despite all that is wrong with our politicians and the political process this is the main reason that I hesitate to get involved... because while the movement will gain momentum, it will probably implode due to infighting, caused by a lack of culture. This is the reason I am reluctant to get involved.

Culture Matters
For those that are not aware, the #Indyref #VoteYes people were trending for 2-3 days solid after the referendum, which became known as #The45/#The45Plus. The reason this happened was because ofof the #Indyref #VoteYes and the "Network Effects" and "Positive Feedback Loops" that the campaign created.

The Network Effects are still there, all anyone needs to do to get them involved again are some "Positive Feedback Loops." But boy! Getting the culture right when you have momentum sure ain't easy when you have a large number of people who are coming together! It's hard enough to do in the workplace... never mind with political activists who all have quite different agendas!

I wrote 29 posts in just over a month based on #The45Plus, most of these were on the importance of culture and/or how to develop a positive culture and the need for unity, which as these posts highlight, can be achieved with some shared identity and a common goal. Pre-indyref these Scots wanted independence...post-#Indyref this disintegrated because a lack of unity and no leadership: #The45Plus Where Did it all Go Wrong?
#IndyRef #VoteYes... for Tarpaulin?
How does Scotland go from every man, woman and child talking about politics in every coffee shop, bus, train and water cooler to 70 people attending a devo max rally 4 weeks later?

Sure, this was partly due to the referendum being a huge decision in the nations history, but it was also because of the momentum that was caused from these "Network Effects and Positive Feedback Loops" #Indyref and #VoteYes worked not because it was political, but because it was fun.


Old and new friends congregated at the #indyref water cooler and this diversity of people made it an enjoyable experience. People you know + enjoyable experience = more frequent and longer visits...which attracts new people to create more momentum.

We saw this momentum post referendum as the first 2 days people gathered to discuss the result and were also asking "What could we and should we do with this network?" when the only people who could lead this, Yes Scotland, didn't turn up the void got filled with angry people. 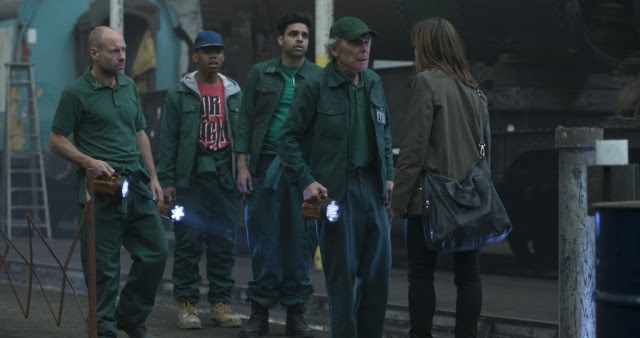 Did you see Doctor Who this week? "The group is lost and a leader is about to emerge. That leader needs to be you Clara and not the moaner" That's kind of leadership that was missing.

Today the only people visiting #The45Plus are angry nationalists, the fun has gone.

Is there an opportunity for the #indyref #VoteYes and #VoteNo to reclaim #The45Plus? Could it do so while adding other reformers to the group? (As I highlighted in my #The45Plus It's a Mindset post). It may be too late for this "brand" but could there be an opportunity for Parliament Square and #Indyref people to amplify their voices for the movement (regardless of what hashtag is used) to evolve? So that anyone who wants to see reform shares the same space.

In my opinion most of the #indyref people voted Yes because not because they wanted independence from England but independence from Westminster. If the people at Parliament Square were to engage with #Indyref #VoteYes #VoteNo #IndyScot #bbcbias #Bettertogether and vice versa would there be more chance of affecting change? (Although there may be the odd snide comment from some committed cybernats)

Three people to connect with are @Bravemany, @Zen432 & @Tw33tingOwl (Who is English and will be sight seeing around Parliament Square today and was very supportive of #Indyref)

Be the Change... Because Politics Won't!
What ever happens under the stars tonight without Tarpaulin or pizza boxes to protect from the elements and without the leadership of politicians to protect the democratic right to protest... make sure that the leadership is there to facilitate all the people who are committed to change are under the same Tarpaulin on Social Media after the event so that collectively the change that people want to see remains a possibility.

I will not be getting involved in the political aspect of this movement because I do not believe that politicians will move, it is obvious to me that they have no interest in "Listening to the people."

I have already done as much as I can by detailing how to work on the culture. If enough people remain together and committed to change through small random acts of kindness (Food banks, supporting small/ethical business, volunteering, mentoring) then the people will lead with so much positive change that politicians will not be able to object.

Then, if successful, in their desperation for popularity politician with then align themselves with the cause, and will probably end up trying to take ownership and credit for it too.

I'll leave you by converging my interests with education, the potential for change these political activists have and organisational culture by quoting a change agent I admire, Peter Sheahan and his colleagues who suggests that educators need to "Stop Lobbying and Start Changing" which is from:

Posted by William Jenkins at 04:53