As the war of words rages on with the Independence debate I thought it would be useful to share more ideas from my own exploration of organisational culture. This post looks at how other organisations;

Culture Matters! Setting the Ground Rules
No matter where you go there are rules, for example:

This is to establish and maintain a set of written and unwritten rules, a set of "Norms" which differ depending on the location and relationship (See Social Vs Market Norms).

What Culture Is... And What It Isn't
I love some of these articles regarding culture, if anyone has a culture like this... please get in touch. I would be keen to see if and how I could contribute to an organisation like this. They just might be about set to change the world!
Culture Isn't Just one aspect...
It is because of the culture that I got involved with the Yes campaign, due to the potential I saw that the unique culture had established and felt that it had the potential to address some serious and long standing societal issues. However, I feel this culture is ebbing away and, if I'm honest, my interest too.

You can assess this yourself by looking at how different the tone and atmosphere is at rallies and online. Before the referendum it was all about what Independence would do for people "A fair and just society,"  today the unifying identity is "Must want Independence" a message that's sure to appeal to the other 55% when it's a more militant compared with a positive and hopeful one 2 weeks ago.

The reason for writing these posts is to do what I can to bring some of the positive atmosphere back. How important is this and how serious am I? I'll let Lou Gerstner clarify this point;

Until I came to IBM, I probably would have told you that culture was just one among several important elements in any organisation's makeup and success - along with vision, strategy, marketing, financials and the like... I came to see, in my time at IBM, that culture isn't just one aspect of the game, it is the game.
...There was no year-to-year tenure on the group; every year, Gerstner reconstituted the group based on each member’s performance; only 71 of the original 300 remained in the senior leadership group in 2002. Lou Gerstner

This last point may be important with any attempts to rebuild any concepts of a shared sense of Scottish purpose. As Peter Drucker observes, you might have 5 military generals but one may be more suitable for a peace keeping mission Vs a guerrilla type engagement Vs open warfare.

Social Norms Vs Market Norms
An organisation's culture will be determined by "Normative Behaviours" and may be social norms or market norms...and you don't want to mix the two up, otherwise things might get confusing and tense:

You are at your mother-in-laws house for a family gathering, and a sumptuous dinner is put on the table. The turkey is roasted to a golden brown; the stuffing is homemade and exactly the way you like it. Your kids are delighted. And your wife is flattered: her favourite recipe has been chosen for dessert. The festivities continue into the late afternoon.

You loosen your belt and sip a glass of wine. Gazing fondly across the table at your mother-in-law, you raise to your feet and pull out your wallet. “Mum, for all the love you’ve put into this, how much do I owe you?” you say sincerely. As silence descends on the gathering, you wave a handful of bills.

“Do you think £200 will do it? No, wait, I should give you £300!” A glass of wine falls over; your mother-in-law stands up red-faced; your sister-in-law shoots you and angry look; and your niece bursts into tears. Life sure can be confusing sometimes!

Absence of Culture, guidance and Norms
But what happens if there are no ground rules, whether written guidelines or social norms? What if prejudice is allowed to thrive? Or when we "Put good people in an evil place?"

Culture is Hard Work!
Stanford professor and Psychologist Clifford Nass highlights how hard it is to establish the right kind of culture, and how we could do well to learn from the world of sport.

“Workplace similarities within a group are neither clear nor obvious. Therefore you may need to consciously work on team identity by identifying and then highlighting a shared quality. A good
example that is that of sport.

In a college football stadium, people in the stands are bound by only a single characteristic: the team they root for. Nonetheless, students and alumni feel perfectly comfortable screaming, “we are number one” or “we won” even though they had nothing to do with the teams success: they didn’t play, they didn’t coach, they probably didn’t know the players personally, and their individual contributions to cheering were insignificant."


Culture at Work: Workplace and Edu Examples
Apple: As I have mentioned in my #The45Plus it's a mindset post Steve Jobs “Pirates” created a “counter culture” which can be very effective when looking to affect changes in organisational culture)
Each member of the team was handed a T-shirt imprinted with what was to become the iconic logo of the Mac team “Pirates! Not the Navy” is ...This was just one of hundreds I would see during my time at the company. Apple would become known as a company that celebrated just about everything – product milestones, meeting goals, new products, new people... there’s actually a coffee table book filled with nothing but photos of Apple T-shirts. Jay Elliot, Apple Vice President.

Ivy League Unis: Students at elite education institutions have a strong affinity for these institutions. The most prestigious colleges foster a very strong culture of

"This is what an MIT, Harvard, Stanford, Oxford, Cambridge student looks like, these are our values and this is how we behave"

This shared collective identity has formal and informal aspects - which means that the culture, tradition, values and aspirational expectations are hammered home in a number of ways. 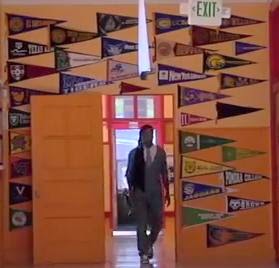 KIPP: Is a chain of charter schools that have a great record with improving the outcomes of inner city kids.

All stakeholders sign up to the same commitment, and there are maxims and pendents for top colleges all over the corridors.

The culture at these institutions is not unlike a sports team and is used to forge the shared identity of what a "Kippster" is a high achieving student from deprived areas.


Doing Good While Having Fun
US Colleges and unis manage to have fun while creating a shared sense of identity both online and offline. 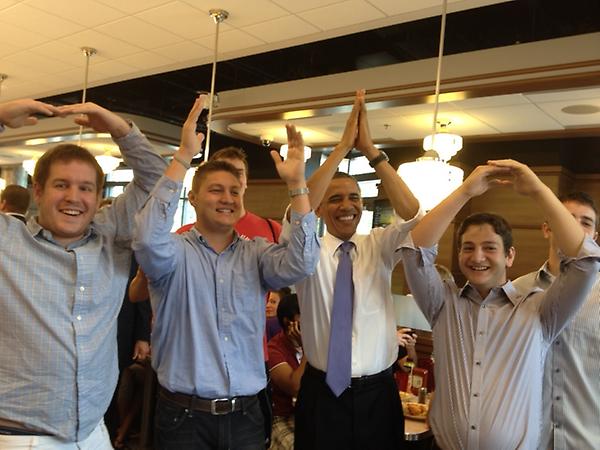 Check out O-H-I-O’s 14,000 user generated photos from all over the world, they even got Barak Obama involved a college PR dream… unfortunately not the case for the President as they ended up with O-I-H-O.

Staying in Texas, when looking for good examples of colleges in Social Media and who had the most fans, we saw how Texas A&M and The University of Texas longstanding rivalry between the caused a stir amongst on Facebook and Twitter. These two rival universities compete with one another to have the most followers and fans.

Now the big question is... Would it be possible to take advantage of this popular "Yes" brand and turn it into a positive culture? Or do we leave it to grow organically into the emerging culture which appears to be the result of our political rhetoric of"Don't Blame me I Voted Yes"

Posted by William Jenkins at 06:23