Start Up Education - Some Practical Examples

Recently I've blogged about the importance of independent education institutions like academies/charter schools and the role that can play in Education reform, as well as their involvement with corporate organisations. These ideas have been discussed since I opened my blog, but recently I've focused on Newlands Junior College.

In this post I want to highlight that how and why this isn't a case of bias, but more an issue of size and autonomy...Having similar attributes to a startup enables these schools to do things that other types of schools may struggle to implement.

This isn't meant as a criticism, it happens in all sectors and even Tech giants can be susceptible... Yahoo was once the undisputed king of search, that was until "The little Engine that could" came along aka Google. Today there is speculation about whether or not Ello will unsurp the mighty Facebook.

I opened my blog as I wanted to highlight the importance of collaboration with various members of the community, as this appeared to be a differentiating factor between privileged private education and deprived inner city schools. My argument (In the form of a mini-novel)) was that "It Takes a Village to Raise a Child"

My most read blog post is "Start Up Education" which details what educators and EdTech companies can learn from each other. Given my interest in more collaboration involving a variety of stakeholders and exploring new ways of engaging our students I am extremely excited to hear about;

1) Newlands Junior College
2) San Francisco's #OneCity initiative (especially their "Circle the Schools" project), and
3) Some of the things that Activate Learning is doing.

But does any excitement and support for these alternative models mean that I don't value "traditional" schools and colleges and less? Absolutely not! Quite the opposite!

I'm supportive of these schools and colleges because their fresh perspective means that they are unencumbered by tradition, and their size and autonomy means that they can very quickly drop what isn't working and focus on what is.

These lean organisations are more likely to be the pioneers who can help with edreform that all educators can benefit from (For the same reasons I cite in my EdTech report). These schools are not necessarily "better." But having the freedom of effectively being a start up just makes them different and, arguably, this difference makes them better placed to test new ideas.

Trapped in a Blender...?

"You are shrunk to the height of a penny and thrown into a blender. Your mass is reduced so that your density is the same as usual. The blades start moving in 60 seconds. What do you do?

This is one of the first questions that greets readers of William Poundstones book, Are you Smart Enough to Work at Google?

On first inspection this may sound like a silly interview question but (after had giving up thinking of a reasonable answer) I looked at the back of the book... and thought the rationale for the question was fantastic!

If you were shrunk to the size of a penny, your body mass would be reduced and you'd be strong enough to leap like Superman, right out of the blender.

Poundstone goes on to explain that the question is a metaphor. The growth of a company is all about change of scale. Solutions that work when something is small does not necessarily work as its scope expands.

Twitter started out as "a fun side project" but the companies main service floundered, and the founders found their "product market fit" was adjacent to what they were working on. Dave Feinleib observes this is typical in "Why Startups Fail" and the importance of testing new ideas... which is easier for smaller organisations; 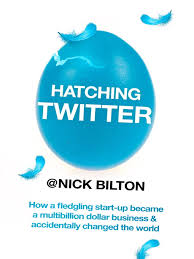 "Changing the focus of a startup is not like the metamorphosis of a traditional business - Like trying to turn a high end clothing store into a construction company. Instead it is more akin to altering the type of food a restaurant serves. Although the cuisine the customers are served changes, sometimes drastically, the same chefs and wit staff can be used to make and serve it." Hatching Twitter

Today educators dominate Twitter, thanks to the trailblazers who explored the medium and became advocates of micro-blogging. But the coverage and uptake remains patchy in places.

A few years ago I compiled a list of College Twitter accounts and discovered that around 50% of UK colleges had Social Media icons on the college homepage. Today almost all colleges have a Twitter account and an icon on the homepage. Quite an impressive roll out! But the process followed the same pattern

1) Early Adopters who pioneered Twitter... Who was the first educator on Twitter? Can you imagine the resistance did he/she get when trying to convince colleagues of the benefits of micro-blogging?

2) Early majority: as EdChat's started to appear others would have joined in

3) Late majority: We now have events like connected Educator Month to try to encourage people to get connected

4) Laggards... Pockets of resistance remain. While colleges have gone from blocking to displaying social media on their webpages there is still an on-going struggle to get all members of staff to get the value of social media, blogging and collaborating with the outside world.

While connected educators continue to encourage the laggards, I wonder if these new, smaller institutions have had the same discussions and challenges regarding social media. We are seeing that some of these schools welcome any and all kinds of collaboration with various stakeholders...it's encouraged and (in some cases) is even part of the curriculum.

No-one would suggest that we use students as guinea pigs to test new ideas in education, but we still need to innovate given the pace of change. Pioneers who are ready, willing and able to innovate is more crucial than ever. This is easier to do in small, autonomous groups than in larger, more bureaucratic one.

When these new models come with a "Cast Iron Guarantee" of a college place or a job, what's the worst that could happen? Especially when the provision is for students who are already disengaged with education!

Ello Facebook
These issues are not confined to Education, there is a lot of buzz about the latest Social Media platform Ello, whether this will become a serious contender to Facebook remains to be seen.

If Ello does unsurp the incumbent market leader, it will be for the same reasons we should be excited about these new, smaller education models: they are not constrained by the task masters of the old guard (Ofsted) and traditional group think (Politicians).

The major appeal of Ello's "Value Proposition" is around an ad-free platform and guarantees around personal data. These are areas that Facebook may struggle to compete with because of its size, the number of employees it needs to pay, the members of the board and stockholders that they are now accountable to. Advertising is a key part of their strategy and it will be difficult to back track.

Activate Learning
While I am a huge advocate of 1) some new education models, 2) more collaboration and joined up thinking, 3) various stakeholders being more involved (Even sharing space), 4) business involvement and the importance of mentors...

It's a bit of a culture shock when you encounter it.

When updating some FE College information I came across a very different website and model and it took a moment to get used to... It's definitely not you're typical setup!

But if Jane Jacob and Steven Johnston are right, and I believe they are, then the diversity of having secondary, further and higher education, along with workforce training,management consultancy and social enterprise is no bad thing.

In my opinion it's this kind of connectedness that gives private education the advantage, as all stakeholders work toward the shared goal, and taking a holistic approach around doing what's best for the student.

Given the pace of change in the workplace (along with the resistance to change in Edu) I think there is value in having smaller, diverse, autonomous and determined groups pioneering new ideas in education as well as the large, slow, bureaucratic, homeogenus organisations that the government likes to constrain with outdated assessment methods. If anyone disagrees with this suggestion I'd encourage them to check out "Waiting for Superman"

I'm a huge fan of all educators, but I also enjoy working with visionary early adopters who question and disrupt the status quo. I feel the models above are better suited to explore and pioneer new ideas, which others will are able to follow once the case studies have been established.

Now how to get some of these Silicon Valley tech companies to roll "Circle the Schools" out to other areas? Hmm, let me think... Twitter Maybe? Perhaps some of the One City tech companies could join an EdChat from time to time. Here's a list of EdChats and their moderators
Posted by William Jenkins at 07:31