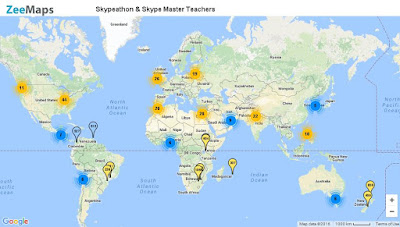 I've done what I can over the years (As and when I've been able) to support tools that I'm a fan of. This includes Skype and encouraging people to get involved with events like the Skypeathon since it started in 2015.

Skype Rivalries
One of the most successful initiatives with the Skypeathon in Scottish Schools was the year that Paul Watkins organised the 'Three Nations Challenge" a competition between Scotland, England and Wales to see who could travel the most virtual miles. 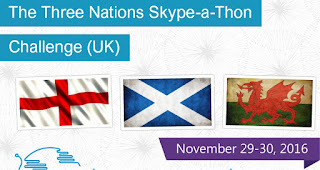 I wonder what would happen if this was re-ran in any number of the following combinations.

Traditional sports rivalries in US Sports - College & NFL
In our first attempt at content marketing and market research and our Twitter in FE report in collaboration with Social Nation author, Barry Libert we noticed the Texas A&M Vs Texas Uni football rivalry spilling into social media (But in a friendly way... not like political adversaries go after one another today)


In our search for good examples of colleges in Social Media and who had the most fans, we came across a great example involving Texas A&M and The University of Texas.

The longstanding rivalry between the two universities never fails to cause a stir amongst students & fans. In the modern age of Facebook and Twitter, the competition extends beyond the playing field and onto the Internet. These two rival universities compete with one another to have the most followers and fans. At the time of writing this currently stands at;

A twist on this might be that the Twitter chats and/or Edcamp organisers from each state compete against other state Twitter chat and/or EdCamp to see who wins the bragging rights for the most miles travelled within and outside of their state?

In Scotland (And across the UK) this could be seeing who Skypes with the most people within their Local Authority outside their district, perhaps buddying up with a state for the right kind of collusion (AKA not the political kind of collusion) to clock those Skype miles up.

Authors, Industry Experts & VFTs
Once you've got schools in your district signed up and have established an alliance with a region/community from across the pond... Perhaps you could recruit an author, industry expert or virtual field trip location and book them up before any of your (friendly!) rivals do ;)

Possible Competitions
Some of the things regarding the friendly competition could include:

The most miles traveled
The best call
The class that learned the most on a call
Incentives to stay in touch over the course of the year and the best collaboration between the Skypeathon 2019 and the 2020 event.

Some Wizard Skype Magic... And Serious Fun!
Ever read a book called Harry Potter? Remember the sorting hat? Did you see how seriously those kids took the house competition... and how loyal they were?

#WhatIf... There was Gryffindor, Hufflepuff, Ravenclaw, Slytherin for Skype?

I've been exploring some Citizenship ideas with a few educators for some young digital leaders and wonder what some friendly rivalries could look like.

Based on some of the books me and my kids have got a lot out of over the last couple of years this could include books like:

Spy Quest
Agent Jones' Mission is to encourage reluctant readers to discover the world of books and he has helped bring reading to life in our house.

BeMorePirate
If, as we suspect, Be More Pirate author Sam Conniff is right and that

'Professional Rule Breaking will be an in-demand skill'

Then applying principles from this book will come in useful... Just look at Greta Thrunberg and the School Climate Strike if you are looking for any evidence of this. (Sam Conniff has also inspired young people through his work at Livity)

Rough Diamond
Nicole Yershon's book is all about creativity, digital and organisational transformation and how she helped young people who were 'Rough Diamond's' to shine when she created and ran the Ogilvy Labs.

Gamers, Youtubers & Other Smart Stems
We have seen how 15 year olds are making money from things like the Fortnite World Cup, YouTube and other ideas that simply were not here a decade or two ago... Minecraft experts like Stephen Reid, Minecraft Global Mentors and organisations like Smart Stems could help with this group

New Power Super Heroes
A lot of kids - some of whom might be lonely at school and/or are having a hard time - can tend to lose themselves in the Marvel and DC universe.

Other lost kids are not so lucky and find that instead of super heroes it's the white supremacist spaces that they get lost in... Their minds getting warped by people who call the New Zealand Terrorist 'Patron Saint of the Far Right??!

Lets help those kids find the right kind of IRL role models and help them develop their own super powers... and their 'New Power' skills.

As all ideas this one may be a bad idea to start with, an OK idea, or a good one but just isn't ready yet.

...Maybe it needs a little more collusion with more turtles that we haven't met yet before there is that 'Eureka' moment and/or the meeting of minds and mixing with other people's 'Slow Hunches'. I love those freaking good idea Turtles!

Confused about that last paragraph (Or, indeed, the entire post?) check this video out
Posted by William Jenkins at 13:46