This post details why I'm going to continue to do what I can to play a role with a UK Edcamp and, hopefully, establish a "Connected Educator Appreciation Day" (with the same format as CMAD)as and when I'm able to over the course of the next couple of weeks.

This is quite an important post, and for reasons that will be detailed in the next few posts, may be one of my last in education. While I might hope that this post could be done and dusted in a single statement:

"I want to organise and Edcamp in the UK - along with some pre and post event ideas - to replicate the Invisible Children's "Rescue" events... to create the same kind of #NewPower storm that will put the network effects and feedback loops in place to facilitate ideas that would not be possible without an event like this.

This proposed event could provide the right kind of momentum, collaboration and cultural conditions... where other ideas could be built upon quickly and easily. There's potential for it to have a lasting impact"

This might only make sense to a few people who I hope will read and act on the idea. So... what to do to find the right words to be able to translate the "New Power" language of the statement above? But if I was to highlight:
A lot more people might have a better idea of what I am talking about.

The network effects have been in place for the SNP since 2014... but the feedback loops wane as and when the angry boycotters and politicos throw barbs at the other side, it's neither fun nor productive!


"Scotland will not be ignored or silenced"

Even more so when there is 'optimal distinctiveness,' 'othering,' and a bit of controversy as the party paints Westminster as the evil oppressors and the Tories as the big bad baddies (Pretty much exactly like Trump does with anyone who does not agree with his world view), and you get support and 5,000 new members and the kind of Braveheart 'Freedom' that creates a similar 'Intensity Gap' that the NRA does when gun regulation is proposed but the lobbying defeats the legislation, in spite of the fact that over 90% of Americans support the reforms.

But, I hasten to add, this does nothing to clean up the foul language or tone down the polarised views on Twitter.

These "Right Honourable," "Leaders" view when it comes to Digital Citizenship is put the blame and responsibility onto others. FELTAG 'genius' Matt Hancock argues that it's all down to the tech companies to do more to do what, exactly? To stop the very behaviour that MPs do little to quell when their own supporters are the culprits?!

Or they blame the other parties abusive behaviour... easier to lay the blame by "looking out the window" than try to fix the issue by "looking in the mirror" at your own support base, right?

Go find an offensive Tweet that's clearly in support of one colour of shiny badge or other... and see if anyone at the party they support reply to the tweet with comments like:

"Great you're supporting the party... But that's not how we encourage our supporters to express their support or discuss the issues online"

Ain't-gonna-happen-it-doesn't-exist, it's only the blame game that exists with those guys!!

(*The walk out was a very smart move. The reason I call it a 'stunt' is because I have been studiously ignored and cannot say that, although I live in Scotland, I've felt all that "heard" by the SNP on a local/personal or national/education or professional level)

Iceland and their World Cup Tweets and match reports will be all over the news and the number of people buying the "#SmiteTheWorld" T-Shirts and booking holidays to Iceland in the next few days. If I were in charge of the campaign, I'd make sure that Greig Kaj Robertson (@greig_kaj) and his colleagues at @rvkgrapevine got a monster wage rise before the next game!

How much value will this tech and social media savvy group of people have delivered for numerous groups before the end of the initial stages of the World Cup?

The Pre and Post UK Edcamp ideas that we are exploring would be used to try to encourage, teach and empower educators to consider these soon to be in demand skills for their school (With things like PTA, school fund raising etc) and for their students so they are #FutureReady for when the gig economy arrives in earnest.

Light a Spark... For the Sake of the Kids!!
If there is one phrase that unites the people that I've come to know and respect on the various projects that I've worked on it's this:


For the Sake of the Kids.

I would love it if I were to say


"Get connected and become a 'Connected Educator' ...for the sake of the kids"

Or to offer the advice I was given, "It comes with the job today" ...and it miraculously just happened overnight. But that's not how it works.

If, on the other hand, I was to say that not only have I had some amazing collaborations and established friendships as a result of being on Twitter, and secured some consultancy work with a hot shot Silicon Valley start up where the main communication channel was Skype... But also that

1) My 17 year old son was so animated and inspired after the Director for Skype for Good, Ross Smith, took a moment out of his busy schedule to provide him with some career advice and words of encouragement.

2) My 7 year old son turned Pirate for a Spy Quest mission that saw him model what David Ryan Polgar told me was the aims of the Digital Citizenship Summit that students "Act Locally, Connect Globally" by travelling 25 miles to Skype a further 2,500 miles and, in the process (with A LOT of help from his Dad), wrote his first blog post.

I would hope that other educators might be a step closer to getting connected.

Then perhaps, slowly but surely, others will get connected and share their stories like the ones I have above with their colleagues to encourage them to get connected too.

Patience for the Unconnected... But Urgency for the Economy
I love hanging out with the innovators and early adopters but, as a user, am a laggard so understand the arguments and concerns those less familiar/confident with technology have, something that I hope putting 'Social Proof' to work via the proposed schedule could help address.

While patience is needed for the unconnected, there is also urgency because of the horrible economy and the clear lack of leadership.

Our leaders are clearly at a loss for answers... evidence here can be found in the fact that in 2008 the banks were bailed out because they were "Too big to fail," only for the toxic culture to continue and for the very same politicians to say "We should have let them fail" in 2017?! Need more evidence? One word: Brexit!!

Every single week, if not every day, bad news about the economy... just this week

House of Fraser, Pound World, New Look, Rolls Royce. 28,000 jobs in retail have been lost so far this year. 4% of the Scottish and UK workforce are in call centers... these jobs will all but disappear in the next few years (And quite possibly all at the same time)

It's an early draft which I am waiting for feedback on from some critical friends but hope this:


Tech Story 2 - The Wild West of the Internet 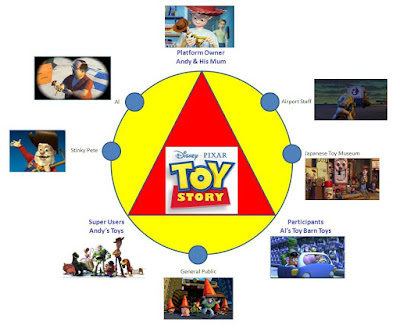 Will help educators to see that there is potential, as well as reasons to be concerned about the wilder aspects of the internet.

Reddit Place is worth a look both from the perspective of how the "Wild West" will evolve and get 'settled,' as well as how messy elements of #NewPower can be too.

The Future of Work
Thought leaders like Sam Conniff, Michael Wu, Henry Timms, Jeremy Heimans and John Abel highlight how the life of a company has shrunk from 60 years to 15 years and, on the current trajectory, this will be down to 5 years soon. 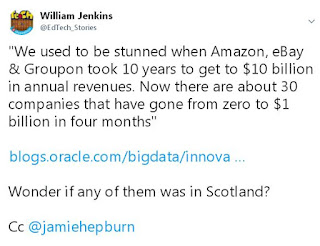 Jobs for life will soon be a thing of the past, and the far less certain 'gig economy' will be a reality for many in the workforce in the next few years.

Iceland World Cup Football contributor Greig Kaj Robertson is a freelance writer, something tells me he'll be doing all right in the "gig economy"
For a very long time the following two articles have been the reason for most of the projects I've been involved with Lost in the Ghetto and Collaborate Vs Collaborate...and I have untilised the principles outlined in my EdTech Report Developing Relationships & Delivering Value.

I loved hearing about what Buurtzorg has done in health care and see no reason why this couldn't work in education... If Mr Swinney is serious about 'empowering educators,' then I have some ideas and know a few people who might be ready, willing and able to provide some assistance.

If implemented well the schedule that we are exploring for the Edcamp could be a step in the right direction to encourage more educators to get connected and to help students develop the kind of skills that will see Iceland hit the headlines over the next few weeks.