This post is an update on the Edcamp UK idea we've been discussing and explores the merits of the creators of our faviourite tech tools who are interested in Skyping with computer science classes, and considers doing something in the run up to the event as well as on the day.

There have been almost 500 people come back to us offering input with this proposed Edcamp idea and over 50 people with sessions that they would be interested in delivering in person and/or via Skype. 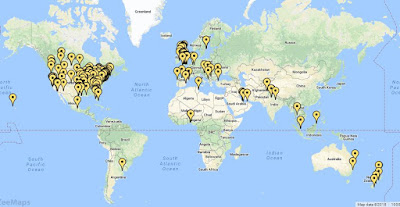 If we were to add in the odd call from some Skype Master Teachers and executives from Skype, Xbox, Microsoft etc... This would then look something like this. 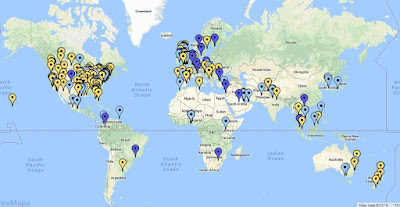 There are another 100 locations to add to this map but, if all these locations were to Skype into some Scottish Schools it would be over 1,200,000 Skype miles... But we'll leave totaling up Skype miles for Classroom Skype team when the Skypeathon is on.

What I'd rather focus on in this post is a potential "High Impact/Low Cost" idea that could assist with Developing the Youth Workforce and the Attainment Gap.

Through Xbox and Minecraft, companies like Microsoft are pretty cool to our kids and with 124,000 members of staff worldwide and 30,000 schools in the UK... it wouldn't take too long to get through as many computer science classes that wanted to hear about the developers world of work.

If anyone who follows my blog (And has a good memory) thinks that this has a familiar ring to it and it's another way to discuss California's "Circle the Schools" program, you'd be right... with one exception:

I have two personal examples of the impact this could have: Two Skype calls me and my family have had

Through the Minority Women in Tech Digital Diversity #SXSW presentation in 2015 I was fortunate enough to have a call with James Stanbridge, who saw the value in what I was working on.

I don't think some of the projects I've developed since then would have happened without this initial 30 min call. I went on to work with James for a few months in my first paid #Cmgr role with a hot shot Silicon Valley startup called Declara.

This was a powerful experience and not least because I was in contact with Ramona Pierson who has an AMAZING story: An Unexpected Place of Healing. I cannot tell you how great it was to get emails from her, especially when the quote at the end was Turing's:

But it's also amazing the things that you miss when you get busy with the day to day work.

For example, I recently read Peter Theil's book "Zero to One" (I write about it in this "Startup Graduation" post). Can you imagine how stupid it is to say to yourself

And then see that it already happened, but you missed it?!

When James moved onto work with Oracle and told me about the companies involvement with Bloodhound Project, I jumped in immediately to put those very ideas we discussed in 2015 into action with Bloodhound, even though no one asked me to... I just acted the minute I saw the Tweet.

... and the Oracle/Bloodhound collaboration is well placed to help with the ideas in this post as well as the #DigCit and career issues I discuss in my #ScotRef post as women in tech and politics face many of the same issues ;) 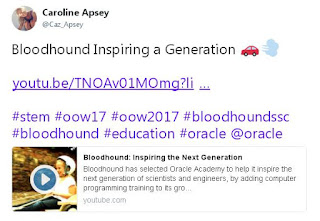 I can't help but wonder how things might look if this call had taken place a couple of decades earlier.

Fortunately for my 17 year old son - and thanks to Ross Smith at the Skype for Good team - he won't have to wait as long... It's already happened! The call took place last December and he was positively buzzing after a few kind words from him. Thank you Ross!!

Regardless of family background most children are on various devices today, so Classroom Skype calls from tech developers would be "Cool" or "Down with the Kids" or "Sick" or whatever the phrase is today.

Most kids are on various devices but, in spite of the efforts of the Attainment Gap etc etc (And BECAUSE of the bankers and "Credit Crunch") there are way more children than should be who are in the lower socio-economic spectrum... and their life chances don't seem to be any brighter than Lewis Termins study of highly gifted children from poor families in the 1920s (See page 10: Culture in Education).

"Dalrympole's Fathers' teachers had not only taught him his lessons but had devoted much of their spare time to taking their intelligent slum children, himself included, to museums and concerts, to demonstrate to them that the life of the slum was not the only life there was. In this way, my father was awakened to the very possibility of possibility. A child born in a slum today with the same high intelligence as my father would be vanishingly unlikely ever to find such mentors"

....even if the mentors are there in deprived areas in Scotland, how many would have a tech background?

Where are the Microsoft's, Google's, Apple's, Facebooks and Twitters of Scotland?

As I asked at Christmas our kids all consume these devices, how many Scots work on creating them?

Your circumstances may be uncongenial, but they shall not long remain so if you but perceive an Ideal and strive to reach it. You cannot travel within and stand still without. Here is a youth hard pressed by poverty and labour; confined long hours in an unhealthy workshop; unschooled, and lacking all the arts of refinement. But he dreams of better things; he thinks of intelligence, of refinement, of grace and beauty. He conceives of, mentally builds up, an ideal condition of life; the vision of a wider liberty and a larger scope takes possession of him; unrest urges him to action, and he utilizes all his spare time and means, small though they are, to the development of his latent powers and resources.

Very soon so altered has his mind become that the workshop can no longer hold him. It has become so out of harmony with his mentality that it falls out of his life as a garment is cast aside, and, with the growth of opportunities James Allen, As Man Thinketh

So... what's needed to have educators connecting their students with these tech creators? As far as I can see two things:

1) Educators feeling the fear and doing it anyway... and taking that first Skype call so that, like Dalrympole's teachers you will be connecting with not just local museums but also national parks, authors and scientists across the globe to awaken our children to the very possibility of possibility

An article was published recently with the title of It takes a Community to Raise a STEM Girl... and is worth a look, it would appear that the tech staff are standing by waiting to hear from you ;).

If this whole Edcamp idea goes ahead we'll look to have some pre-event activities and would welcome any Tech execs to get in touch to see if they might encourage a few computer science classes to make that all important (And IMHO rather scary) first Classroom Skype... I'd hope that these calls have the same kind of impact on others that they have had on me and my son.

Thank you again to James Stanbridge and Ross Smith. I hope that the Minority Women in Tech #SXSW presenters will also be looking to get involved.

If anyone would like to either get involved or find out more about this Edcamp idea, please feel free to complete our

More details regarding dates and a venue will follow soon... still doing a little due diligence.

NB Are there other tech companies out there that could get involved? Sure there are! Is there a bit of Microsoft, Twitter and Oracle bias in this post? Most definitely! Am I affiliated with any of them? Nope... (But I am keeping people updated with the ideas and plans)... I mention and focus more on these companies because Twitter and Skype are the tools I've used to connect, and because some of the people at these organisations took the time to engage.

You get advocacy like this when product market fit has been achieved AND you take the time to develop and Scale Personal Relationships ;) #ZombieLoyalists

"Sales & marketing departments must refocus away from selling products and toward creating relationships. Partnering with customers is a key component. The primary challenge here is not technical, but cultural" Crossing the Chasm & #GoAwayPushyEdTechSalesPeople
Posted by William Jenkins at 13:52