An Unexpected Place of EdReform: Circle the Refugee Camp? Ikea, Teach for America, Pearsons PALF, Apple, Google, Alt School and Declara walk into a refugee camp... The start of a bad joke? Or the beginnings of a crazy idea?
It's the latter, this post details something of a crazy idea that just might be feasible and, in the grand scheme of things, may not require too much from each stakeholder to implement... but potential advantages and win-win scenarios for everyone involved.
I wonder #WhatIf... Silicon Valley startups were to "Circle the Refugee Camps" not with concrete walls and barbed wire like our governments do, but with empathy, compassion, assistance and (of course) the Bay Areas' unique blend of irreverence of the status quo and their ability to massively creatively disrupt?
This post was drafted a while ago when an episode of Downton Abbey was on (Bear with me, this is relevant), the idea has a number of sources and this was one of them.
I'm picking up with the article now as I'll be having a discussion with an organisation later today who has an interest in ideas like this.
Furthermore, if they like the suggestion and wanted to explore the idea further, they are in a rather unique position of being able make it happen. More on the organisation at a later date.
In the mean time here's the story, and the story behind the story... how ideas come from collaboration and "slow hunches" Come Dine with Me: Refugee Special
Both the title and the start of this post (As well as a lot of the content) is in reference to that formidable can-do Silicon Valley entrepreneur, Ramona Peirson.

Ramona is so passionate about finding solutions to the Syrian refugee crisis that she got the following group of people together to discuss some solutions;
A former neo nazi, a Baptist reverend, a Ukranian investor a strategiest for the US Department of Education and two Jews
Can you imagine the conversation with that group? Oh to be a fly on the wall in the room! They should have recorded the evening and aired it as Come Dine with Me: A Refugee Camp Special

Downton Abbey Vs Silicon Valley
Not long after hearing about this story Declara's other Co-Founder, Nelson Gonzalez, curated an interesting article on how Silicon Valley startups and others are innovating solutions in refugee camps: Humanitarian Innovation: The Power to Change the World.
So... I'm reading this post while my wife is watching Downton Abbey, a show I'm not a fan of as it's a reminder of how elitist and divided Britain is.

"When Jony Ive was asked what it was like being a Knight of the realm, he replied "You know what? Out in San Francisco it means absolutely nothing, Back in Britain it is a burden" Jony is referring to Britain's strong class divisions."  Leander Kahney
Something I found to be an interesting combination was the fact that the show was sponsored by Amazon Prime and an advert for Santander bank came on and spoke about Apple pay almost as much (If not more than) their own brand.

So there I am reading about humanitarian innovation in refugee camps, with a show about class elitism on the TV but the ads are about two Silicon Valley tech companies... one that started out as an online book retailer, the other a PC maker but who are now operating (and massively disrupting) the stuffy banking and broadcasting sectors.

Developing the Young Workforce Vs Circle the Schools
I compare policy makers attempts with reform and change with Californina based tech companies and startups regularly in my blog. 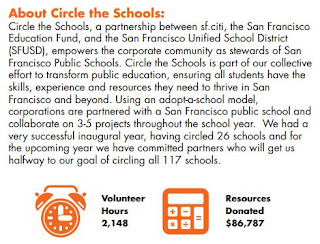 After writing this post the Circle the Schools organisers got in touch and we had a conversation where we expressed an interest in collaborating with one another, all within the space of a week. So it it makes sense to me to look to California for solutions to these kind of issues.
EdTech Is Tough
Over the last week I've been using Twitter (Another Silicon Valley startup) to demonstrate how challenging education can be to engage with, as well as suggesting ways to improve things. The usual caveat here: this is not a criticism of educators, but is down to a number of factors.
The issues here are significant and the kind of innovators and investors who could help facilitate a "nation of innovation in education" are shying away from EdTech, as the market is too difficult.

Will Scotland be able to operate at the pace that's needed in education if tried and tested products that have been around for 9 years (and are free!), but appears to only have around 30% of uptake?
If we take all of the above into account, as well as Declara's response for dealing with this "EdTech is tough" problem;
"The U.S. education sector is highly fragmented and politicized; it's hard to win major contracts for radically new approaches without a lot of tussles. By contrast, in countries such as Chile and Australia, the national authorities can embrace new tools quite quickly and decisively" Ramona Pierson, Declara CEO via Forbes
This might bring us to an unexpected place of EdReform..
An Unexpected Place of EdReform: Circle the Refugee Camp
According to the Humanitarian Innovation article there are 43 million people who live in refugee camps for up to 12 years! Wow!
I've no idea what the education provision is like in these camps. If the provision is poor (or non-existent) and you're there for 12 years, surely this will do nothing to aid the existing crisis. But...


#Whatif... Ikea, Teach for America, Pearsons PALF, Apple, Google, Alt School, Declara and others were to enter the scene.
IKEA innovates to create a cost effective "Pop up school" along the lines of the one room Alt School model, Pearsons PALF and Teach for America come in to provide the benefit of their experience and expertise... then Google, Apple and Declara etc move in with their apps, solar chrome books and access to western teaching materials... and the whole thing is supported in the same way that Circle the Schools is.
This could be an opportunity to re-imagine education from scratch, maybe even exploring some very different ideas at different camps and assess what's working best.

Refugee EdTech Ain't so Tough?
How much resistance would there be if EdTech companies were to say, we've got this idea and we'd like to trial it at the camps' school... would it be a case of;
"Oh we need to do a risk assessment, and that will take approximately 9 years... See you then"
Or would it be a case of

"You want to come in and help educate our kids with a new idea? Sure, come on in!"
Then, if you get an effective case study in a place like a refugee camp surely getting traction in the West will be a bit easier?
Through the research by the authors of Immigrant Inc we already know that immigrants are more likely to be entrepreneurs than the indigenous population.

Then there are things like soft skills and core values to consider... what would be the implications of having people who spent 12 years in a refugee camp being leaders in various areas of life?

Would we have leaders who had more empathy and compassion given their experiences and humble background?
I've no idea to the answer of any of these questions, nor do I know how insane the idea is... but when the organisations you are speaking to are based in Silicon Valley and have core values along the lines of "Be Bold" and "Achieve the Impossible" then you sure don't feel quite as silly as you might publishing random ideas like this.
Posted by William Jenkins at 00:30