Everywhere I look today I'm hearing about Trolls and online abuse. Our MPs are complaining about it (and, as usual, blame others), it's an occupational hazard for Community Managers and Anita Sarkeesian is taking the fight to the gamers where sexism and trolling seems to be out of control.

In my last two posts I've explored how I feel that our MPs have missed an opportunity to address this issue because they chose to take the perspective of self interest and blame, so I turned the tables on politicians by forming an argument on why I blame politicians for allowing online abuse to thrive. 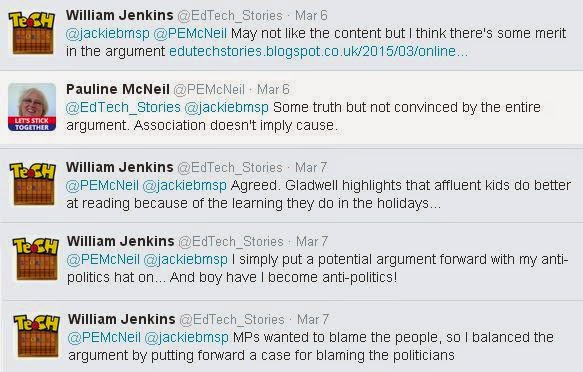 In the run up to the General Election you can't escape politicians on the TV and last night we had the presenters on "This Week" re-iterate Margaret Curran's position of blame, then Michael Portillo asked

"What can be done about this issue?"

Seriously?...This is coming from the very people who are responsible for education policy! I was about to scream at the TV

Then I remembered the old saying "If you scream at politicians on the TV when you're alone in the room... does anyone here you?" That and the fact that Outnumbered TV actor, Tyger Drew Honey, came on the show and talked A LOT of sense.

The previous evening I was settling down to the TV show "Scotland 2015" I found myself starting to get "snarky" about politicians, but was saved by an EdChat on Twitter, an EdChat on Digital Citizenship where the topic was cyberbullying and trolls.

Political Class Inaction Vs Educator Pro-Action
The discussions about social media abuse has turned out to be something of a microcosm of my views, experiences and opinions of politicians and educators.

Like many, I have lost all faith in the UK political classes. They seem incapable of putting the best interests of society above their own self interest, as I think their "Woe is me, blame others" rhetoric around this social media debate demonstrates.

Meanwhile, back in the classroom... We have a group of educators who, since 2011, have given up an hour of their free time every fortnight to come together, share ideas and generally discuss how to improve the social media skills and digital citizenship for our young people via this #DigCit Chat.

This is why it is my opinion that much of the Ed reform that is needed will NOT come from the "political class" who are responsible for education policy, but from groups of educators like the #DigCit Chat moderators and regulars.

NB The context of the "Political Classes" in this post refers to UK politics. I know that Arne Duncan has his critics in the US but, from what I've seen, I think a lot of his policies are better thought out than in the UK. If nothing else he certainly appears to listen to educators more than his UK counterparts.

#DigCit Chat
As I was getting ready to be critical of the over exposure of this whole Jeremy Clarkson fracas and the media trying to stir up trouble with the non-issue of immigration in Scotland, I saw the chat was about to start... So I switched off the TV and did something more interesting instead.

Trolls, a subject close to our politicians heart... and yet, I didn't happen to see or hear any UK policy makers join this digital citizenship Twitter chat... but there sure were plenty of educators.

As I've come to expect in any of the 200+ regular EdChats, there were lots of fantastic insights and great ideas. However, as myself and others have found can be typical of edchat topics... It can be a case of "preaching to the choir," when what's really needed is some "evangelicalism for the sinners"

#DigCit Chat on Trolls... Some Notable Absentees
It's not just policy makers who were not joining the chat. There were other notable absences. For example, there were not too many "Unconnected educators" and, if they are not online, how can they advise others?

Neither did any of the student cyberbullies or trolls join in the discussion.

Indeed, to play devil's advocate for a moment, it could be argued that the chat was a little one dimensional as the main sector represented was educators? Could this be a problem?

In the case of this particular topic, I'd say that it could be. The advice that I've seen during the Community Manager Twitter chats that I join, was a quite different from what some of the educators were recommending. These Community Managers regularly encounter, engage and effectively deal with Trolls (One way or the other!) when managing their online forums.

Educators were advocating ignoring trolls but Community Managers would recommend engaging them as a first step to see if there are any unresolved issues. Here are some examples with Community Manager's suggestions.

NB My EdChat moderator friends know that I am absolutely 100% NOT being critical of EdChats or the impact that they have in any way, shape or form. Any observations above are designed to help progress the EdChat agenda forward. These observations are definitely not meant in a negative or critical way!

To Catch A Potential Troll... And Intervene When They Are Young!
So who provides an intervention in cases such as;
So, who trains these young people on good digital citizenship?

Who out of the group above is there to teach them about the consequences of their actions?

Could a little bit of correction go a long way... When your a young Troll?

I'm doing some research on Social Media in UK education just now and comments like the one above are not entirely uncommon at schools that do not have a presence on Twitter, and these comments are left hanging... they are not addressed by anyone.

So this begs the question, who's to blame for these comments? Is it so easy to put all the blame on the aspiring young Troll?

I don't think I'm a particularly mean person, and was by no means the most difficult or obstreperous teenager but I also don't think I'd like to be going through any moody, grumpy adolescent stages with access to social media and little or no guidance at all.

#DigCit Solutions: Start Where You Stand
Napoleon Hill and other startup guru's suggest that you "Start where you stand" and work with what you've got... So, let's stop and take stock.

Fact 1: Trolls are an issue everywhere on the net.
Fact 2: Education and good digital citizenship is extremely important

So, what have we got to help educate our young people?

1) Ineffectual & self interested politicians who make a living out of blaming others
Hmm?! Let's skip that particular "resource"... Next!

2) Unconnected educators who don't have any social media skills due to a lack of relevant PD. That's fine, we can work with that. Just a little mentoring and PD required.

3) Young people who have access to the internet and social media but due to their raging hormones, geographic location and socio-economic factors they can lack access to rational thought, social media savvy "Connected Educators" or parents who can advise on good Digital Citizenship. Could we use the very medium that these people use to abuse others to address any of the geographic or socio-economic issues?

4) A dedicated group of tech savvy, social media competent educators. Could this group be key to all our Trolling problems?

What if... We could connect group 2 & 3 with the 4th group? We can leave the first group to their politics of blame.

What would be needed to achieve this? The same thing as every other project I'm currently working on: Some salesmanship, collaboration and community building.

I'm A Student Friendly Social Media Educator
Do you know what it would take for all the #DigCit chat regulars to evangilise to the sinners as well as to preach to the choir?

I think that all that might be needed is an Twibbon for their Twitter picture and a couple of hashtags.

1) Any educator who is comfortable with social media and is happy to offer support, advice and guidance to students on digital citizenship issues online has an "I'm a Student Friendly Educator" (This could be as simple as having #StudentFriendlyEdu along bottom of Twitter pic and/in their bio

3) The #DigCit team produce some guidelines and/or some form of commitment for #StudentFriendlyEdu and #DigCitStudent to sign up to regarding how they will behave online and how and where they will advise others within their communities.

Social Proof, Social Norms and Community Building
The final point above is very important for 3 reasons. It will;
A troll, or digital naïve (see what I did there naïve, native... No? Oh well, never mind) who comes from XYZ school may be EXTREMELY unlikely to post a nasty comment using #XYZschoolstudent. BUT... they may well check, or even use, this hashtag if they decide to take a day off from trolling. When they do, they will get a clear message that trolling and negativity is not the norm at our school.

Would this idea wipe out Trolling and Cyberbullying entirely in education? Of course not, but neither will it require a great deal to implement.

Sound ambitious? A small but dedicated group of EdChat regulars cleaning up what is a significant problem online?

Facebook started out with no members but grew one school at a time. Some of the biggest online brands manage communities of millions with a tiny team of Community Managers.

There is already a dedicated group of #DigCit regulars, not to mention the thousands social media savvy "connected educators" who are keen to share their experiences with colleagues and students.

All that would be required is some icons and hashtags... And a whole lot of outreach and sales hustle. If executed well and this could scale quickly and could have a big impact.

And if educators are able to help some of the poor, abused, powerless and helpless victims of online abuse like MPs who actually decide education policy... You never know, there might even be a little more respect for educators by this "Political Class"

If the @DigCit moderators are in on the idea of some sort of "I'm a Student Friendly Social Media Educator" idea, I'm happy to share some more ideas... and to provide a bit of the community outreach and "sales hustle" that might be needed.