An Amazing Global Edu Race: Get Craig to ISTE (#GetCraig2ISTE)

Did a comment with an Antipodean EdChat Moderator (New Zealander, living in Singapore, teaching in Australian School), which started out half in jest, lead to more obstacles being removed around the idea of Educators getting support to go to ISTE?

Let's find out shall we? (Spoiler Alert: My answer is YES! To all of the above)

Big Audacious Goal...Started as a Joke
When following up with this "ISTE or Bust" idea with someone in my PLN, Craig Kemp (@mrkempnz; EdChat: #WhatIsSchool) an antipodean based moderator, I opened the discussion with the following 4 messages

Message 1:
As you can see this is very much a US-centric example, but could work the same with local events too

Message 2:
We could still see if we could get you to ISTE as well, if you wanted. I'd be up for giving it a go if you were!

Message 3: Posted that last message partly in jest but in the 30secs it's taken to post I've had a thought that could be a VERY attractive proposal for suppliers

Message 4: ...And it would mean you'd get to meet William Chamerlain to discuss EduRace and take that forward while you were there.

NB Message 4 should have also included Craig's WhatIsSchool Co-moderator Laura Hill (@candylandcaper), who I assumed was "Down Under" too, but is in New York, so that means we need to try twice as hard to get Craig to ISTE.


The solution I thought up for this "Big Audacious Goal" as Jim Collins calls it, might also work for Nikki (@NikkiDRobertson; EdChat: Never mind that!...Just use #GetNikki2ISTE, thanks!)
This could also prove to be a solution for those who;

What happened in that 30secs between sending the second 2nd and 3rd message? Two "slow hunches" came together, both of which could be wrapped up in one word: Empathy (A top trait of Cmrg's... apparently. Yay, there's hope!). I had enough knowledge of startups and of Craig's projects to think;

"Well if getting to ISTE from "Down Under" is expensive for my mate who asks unbelievably probing questions in his #WhatisSchool chat (which, again, is a chat I don't attended enough!) around what Geoffrey Moore would term as "What is" and "what could be"

My subconcious obviously kicked into the "#WhatIsSchool" mode and mindset needed for Craig's chat (A challenge a 12am Local Time!) and made a leap from "What Is" to "What Could Be"...But with a very ordinary idea, to look for mutually beneficial "Win-Win" situations, scenarios that

"Encourage collaboration, engagement and innovation"
(Now where have I heard that before? Let me think? It'll come to me)
Then there was empathy for Craig, I know he collaborates with William Chamberlain (@wmchamberlain; EdChat: The Daddy of them all #EdChat), and realised that while they collaborate on this project, they might not ever have met in person before.


Chance Favours the Connected Educator
That was the spark that lit between DM2 and DM3... It would probably mean a great deal to Craig and William if there was a way to Bridge that geographic gap (Geography! *Waves* to @GeoSpiegs LOVE his maps! Pete, if you ever market them for other geography teachers let me know! I'm there for you! They are so cool!)

Now maybe the people who are trying to bridge a psychological gap between Educators and Suppliers can help out with that one? Over to you Mr Isaacs (@Mr_Isaacs; EdChat: #EdTechBridge)...

@mrkempnz #Whatisschool Meets @MattMurrie #Whatif...
Whatif... an extremely influential and well connected educator was to be able to get contributions from Australian, New Zealand and Singapore Education SME's and startups (Small amounts from startups; larger contributions from SMEs)

This would, again, be brands that Craig used, liked and would have no problem recommending to his friends (In sales speak this is called: A High Net Promoter Score).

OK, so that may be fine for the medium and large companies that Craig already uses, but he can't endorse any startups that he doesn't know or use... Can he? No, I wouldn't have thought he could, nor would I recommend that he should.

However, even a salesperson with the best product knowledge might only get 30-60 seconds with a delegate. So, if  Craig could learn what the "Elevotor pitch" was, the vision or problem the startup was looking to solve, he could sound ISTE delegates out. This way he would be helping startups to either;

1) "Fail Cheap. Fail Fast" If the comments he got were unenthusiastic he could report back "I Don't think the US is for you Mate." If the feedback was poor this would have only cost $100-500

Craig will be more likely to get more and better feedback for the company that any sales person could, more educators might speak to him... they would probably be more brutally honest with him than a sales person they don't know..

2) If, on the other hand, the feedback is positive, the company could be onto a winner... They could get some initial orders through Craig speaking to the right people, and it's only cost them $100-500.

Selling Out Or Helping Out?
Would this be some sort of a seedy sell out bribe? Or, would this not only be a cost saving... But a cost saving using the best possible sales person that money CAN'T buy?

This would also help Craig and William out with the development of their Amazing Race ...

"An amazing race style project to encourage collaboration, engagement and innovation in learning for schools around the world" 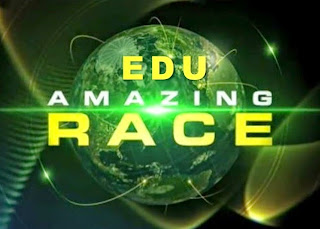 So I have an alternative version of William and Craig's Amazing Global Edu Race... Can anyone help #GetCraig2ISTE? Better be quick though the #ISTE2015 clock is ticking, and $11-25,000 is a lot of money! Just ask a sales person who gets reminded constantly;

"Do you know how much exhibitor space is costing me at this conference? Get out there and bring some educators over and some sales in!"
See you all in the next post, inspired by Craig Kemp ...and will definately help with that other race against time: To #GetNikki2ISTE
Posted by William Jenkins at 04:53