Was Henry Ford a Connected Educator?

Or more accurately... was Henry Ford educated connectedly?
What were the consequences of leaders at disrupted industries (music, retail, gaming, media) being disconnected from what their customers wanted and what was happening in their industry? Are networkers as important as leaders?

And is this post simply preaching to the converted as the unconnected are unlikely to read this?


Think & Grow Rich... Networks?!
In 1937 Andrew Carnegie wanted to study the philosophy of success, Napoleon Hill undertook this project and produced a book that is something of a classic in business and self help circles.

Given that the title of this book is "Think and Grow Rich" and that there are few educators I know who enter the profession to become millionaires, I'm not sure if too many educators will have read this.

The core message from this book is that an individual with desire, faith and persistence can reach great heights by eliminating negative energy and thoughts and focusing on the greater goals in hand... (sounds like just what the social mobility doctor ordered!) Some of the 13 "steps" listed in the book might not look out of place in the classroom and include:

As its connected educators month I wanted to highlight the value of Henry Ford's "Master Mind Group" or what we might call our network connections or PLN today;

Ignorant... But with a Great PLN (1916)
During World War 1, a Chicago newspaper published editorials which called Ford 'an ignorant pacifist.' Ford brought a suit against the paper for libel. When the case came to court, the attorneys for the paper asked Ford a variety of general knowledge questions which were intended to prove that he was ignorant.

Ford was asked questions like "Who was Benedict Arnold?" and "How many soldiers did the British send over to America to put down the rebellion of 1776?"

Ford became tired of the line of questioning and said "If I should really want to answer the foolish question you have just asked, or any of the other questions you have been asking me, let me remind you that I have a row of electric buttons on my desk, and by pushing the right button, I can summon to my aid people who can answer any question I desire to ask concerning the business to which I am devoting most of my efforts. Now, will you kindly tell me why I should clutter up my mind with general knowledge, for the purpose of being able to answer questions, when I hire people around me who can supply any knowledge I require?"

That answer floored the lawyer. Every person in the room realised it was the answer not of an ignorant man, but a man of education. Any person is educated who knows where to get knoweldge when needed, and how to organise that knowledge into definate plans of action.

Henry Ford had all the specialised knowledge he needed to become one of the wealthiest men in America... It was not essential that he have this knowledge in his own mind.

I'm sure we could have a discussion about this regarding rote learning etc but will focus on CPD and PLN.

It's Networkers we need... not leaders

As a recovering EdTech salesman, I doubt I would have a leg to stand on if someone accused me of ignorance, but like Ford, while I may not have many answers... social media sure has made it easy for me to find someone who does!

In addition to this, according to a comment that I read during the World Economic Forum, this may stand me in good stead, as a seasoned venture capitalist suggested that;

"During a recession it's networkers we need not leaders"

I wonder what people's initial reaction to this statement is? If we consider and review comments from the CEO's, Directors and Senior Managers during key points during the disruption to the music industry, gaming, retail, the media etc you might find that you agree with the statement.

Were there people in these organisations who were saying;

"We need to consider what we are going to do about these up and coming companies, who are doing things differently?"

Almost certainly! And they were probably "connected" to various people and communities within their industry who were telling these networkers "You need to check this out" and "You want to keep an eye on XYZ."

In education it's the connected educators who are forming links with like minded people who share, values, interests etc who are giving up their free time to attend edcamps and unconferences, being inspired and enthused at these events, going back to their schools and collaborating online with one another to explore new ideas. And (eventually) these ideas become mainstream.

Preaching to the Converted
Would the examples above help encourage an unconnected educators to get online? Or, perhaps more accurately, will they even see this post? If they are somewhere online and the subject line catches their eye, are they likely to open it? Or will they see it and think "Oh not 'connected education' and social media again!"

I will be detailing my own journey which I might call; "Whats-the-point-of-Twitter-why-would-anyone-care-about-what-I-had-for-breakfast-to-social-Media-convert"

I am sure that my story will be along similar lines to others, adding to the voice of many others who detail;
But who will I be reaching out to? The already connected?

Disconnected... And Not Interested
Tom Whitby had a great post patience for the unconnected and he highlighted that the easiest sale has now been made - the early adopters are all signed up!

The early adopters with any new idea accounts for 20% of any given market. If we were to compare the number of connected educators within any given region/sector/country, would we find ourselves at around 20%? In sales organisations make 2 huge mistake which are; 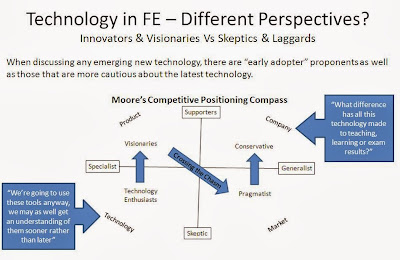 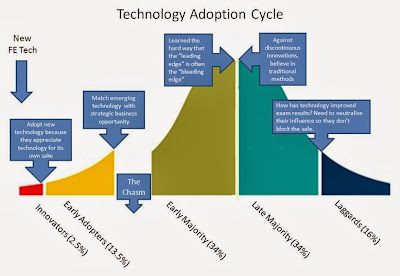 Convincing the Disconnected
I wonder if educators are starting to find some entrenched camps in the staff room, those raving about being a connected educator Vs the disconnected... and no matter what you say they are closed to the idea.

This was me, I had a pre-conceived idea of all social media channels, ideas that I had formed without doing any research on the topic at all! Two things changed this view for me;

The point here is that the things that convinced me were offline and were related different methods to what I had been exposed to before, they focused on career prospects and other opportunities that I was missing out on.

Is the connected educator agenda approaching "the early majority?" If so, does the recruitment of others require some different approaches? ...And, regardless of the data and the number of connected proponents, is the most important and toughest sell for getting educators online now upon us?

I understand that Arne Duncan will be a guest on a chat session on Monday as part of Connected Educator month... I wonder what would happen if the discussion at the water cooler on Tuesday morning was "I joined a discussion with Arne Duncan last night?" with no mention of social media and if (or when) colleagues ask "How did that come about?" it might just get them logging on and checking all this connected stuff out.
Posted by William Jenkins at 04:41