As usual I have been checking the world of education through the invaluable window of Twitter this week. I couldn't help notice how different the view was when I looked across the pond compared with my own back yard.

It has been two years since I produced my Twitter in FE report where I compared the similarities and differences between how UK and US Colleges were using this social media platform. Twitter in the US looks like its well on its way to becoming a mainstream learning tool in the not-too-distant-future. I wonder when (and what it will take) for the UK to catch up. 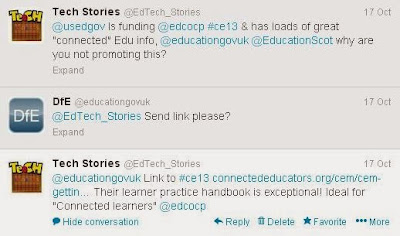 This month has been second year of "Connected Educator Month," which is funded by the US Department of Education and, as far as I can see, appears to have helped to take Social Media in Education to a whole new level.

It is important to highlight that I have not always been such a proponent of social media and I have detailed my journey in this "One Small Step for a Digital Immigrant" post, I hope that anyone involved with engaging educators with any commercial products/projects will find this useful.

Policy Makers, Educators & Twitter
Ever noticed the kind of running skirmishes that educators and policy makers have on Twitter, both groups appear to "Tweet at" one another, or avoid each other. There certainly does not seem to be much Tweeting to or engagement. Through the work of Tom Whitby, Arne Duncan and the team who moderate #EdTechChat there has been a significant development.

Tonight (Monday 28th Oct) at 8pm ET (12am GMT) the US Secretary of Education, Arne Duncan, will be engaging educators during this weekly Education chat session. Obviously this is not without its risks, and my initial thoughts were

"How on earth did the guys pull this off?"
"This is a bit of a big deal in the development of Twitter in Education!"

Then I got a little concerned, if you've ever checked any of the UK education hashtags for #Gove then you'll appreciate the source of this concern, I wondered if this engagement would be nothing more than educators "having a go" at Arne Duncan and attacking him on some of the governments' current education policies.

A brief  intermission in today's post... Speaking of Education policies you have got to read Ch2 of Malcom Gladwells new book on class sizes, as well as this report - The causal effect of class size on scholastic achievement, here are some Tweets to give you some idea of Gladwell's argument; 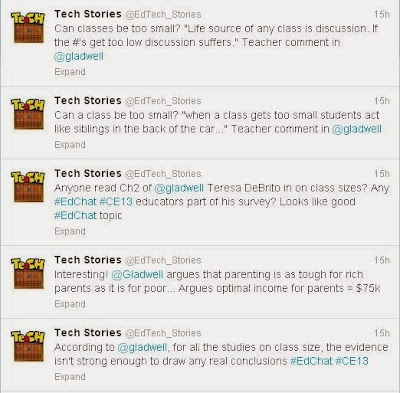 Intermission Ends
With regard to educators just "having a go" I should have known that the #EdTechChat moderators had everything in hand! They have put together a post which, if read by all participants before this evenings chat, I don't think there will be anything to worry about.

Check out the post that they came up with to let participants know how they expect all their guests to be treated, not just policy makers: Arne Duncan - Some thoughts on Digital Citizenship.

A great post! You can tell they are educators who are used to taking control of excitable groups, can't you?

Meanwhile... back at the ranch, I noticed that #SLTChat (Senior Ledership Team Chat, Sunday 8pm) are trying to encourage the Department of Education to take part in their session next week, perhaps DfE can check out Susan Bearden's post and the #EdTechChat event this evening to see how it goes, and then consider engaging with #SLTChat next week.

I also suggested this to policy makers who work in FE that they might want to try this too, but like #SLTChat have not had any reply but, as Tom Whitby suggests, this is perhaps to be expected initially as It's a big step to consider taking.

What is a little ironic though is that a guest speaker at an FE event was talking about how to engage your audience on Twitter... I think I have been following this advice, but I find that it remains something of a challenge; 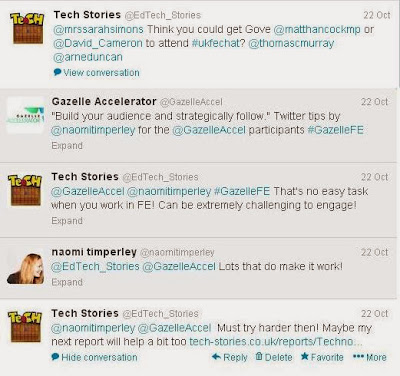 Live Tweeting in Class
For example Live Tweeting in class is something that has intrigued me and have suggested this in my Twitter in FE report. We have discussed this as a topic for #ukfechat and there are a couple of colleges that I am aware of who have explored the use of Twitter in class.

When checking out Tweets for #CE13 (Connected Educator Month) I came across MsSanders class and their #SandersCE hashtag and here's the conversation we had; 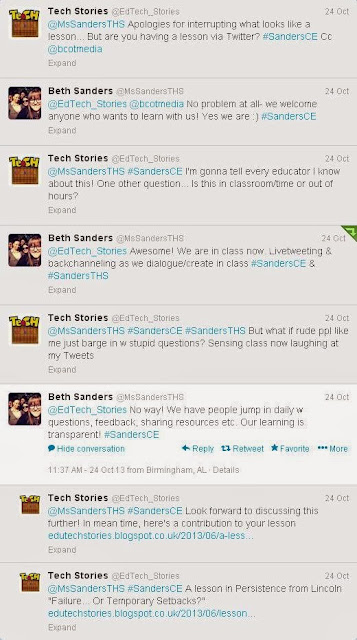 Once I got over the shock of what I saw, I was struck by how  thought provoking, intelligent and articulate the students were, what a way for;
I know that there will be other examples of live Tweeting, but this class really stood out for me. I have so many questions for MsSanders about how this was established, what the barriers and considerations were before implementing it, how you manage live Tweet lessons etc and look forward to discussing this further with MsSanders, and others.

In the mean time I would encourage UK educators to check out some of these "Connected Educator" events, I have learned so much through taking the time to find out what social media was all about and how to make it productive for me in progressing with my personal and professional goals.
Posted by William Jenkins at 04:52