This is a post about the similarities that I found when I met Malcolm Wilson and Stuart Lennie, educational ICT Officers for Children's Services at Falkirk Council and my own experiences... and how the issues with Technology integration in education are more about culture and buy in than they are about Technology.

This post would normally be one of my "How I met your Awesomeness posts" but to do so would be a dis-service to Stuart and Malcolm because this was a case of...

Google Culture Meets a bit of Steve Jobs Hustle!
I would say that I was not surprised, nor disappointed at what I saw when I met Malcolm and Stuart... The quality of the work that I'd seen before we met informed me of what I'd find.

However, I was extremely surprised to find that a little bit of Google and Apple culture would be found at a Scottish Local Authority.

My blog has evolved over the last 3 years and I would have said it has become more about sales and culture than any thing to do with technology in education.

I've been advocating for the importance of culture and the role that sales plays in EdTech integration... and how broken the sales process is, or how important it is to iterate to achieve "Product Market Fit," and that this is a messy and collaborative process.

While I could write a few pages about how impressed I was and where there were similarities and differences in our experiences, I'm going to focus on three points.

Culture:
When I hear about work like this I want to know how it evolved to become so successful. The phrases that I kept hearing during my discussions with Malcolm and Stuart were;

"We are teachers with classroom experience, so when we work with schools we know what the issues are" and "For the sake of the learners"


This "For the sake of the learners" is something that all the educators I admire seem to have in common. Educators like this have said to me in the past "If we innovate our way out of a job, and it benefits the kids... then we'll do it"


Smart Boards
I know that a divisive technology in education is Smart Boards, some educators love them... others are ripping them out and putting projectors back in.


Hearing about the methodology, the working relationship and support with the sales rep and also how this team piloted various Interactive Board companies as well as how they went about settling on the eventual supplier was music to my ears.

This is because the culture and relationship between supplier and educator is key. I'm not talking about golf trips and old boys here.

I'm talking about the ability to co-create, collaborate, roll out and even have the odd constructive (heated if need be) debate about the technology "For the sake of the learner"

Sales Hustle
Walter Issacson said of Steve Jobs in his book that Steve Jobs is the best salesman that ever lived. I would have said that Malcolm and Stuart and pretty damn good salespeople! I know that sales is a dirty word to many, but in this context it's a massive compliment!

These guys seem to have put a lot of hustle into embedding the technology, technology that they had piloted with teachers and know is sustainable before rolling the product or service out. Malcolm's blog is also a great tool for helping deliver the "Whole Product Solution" 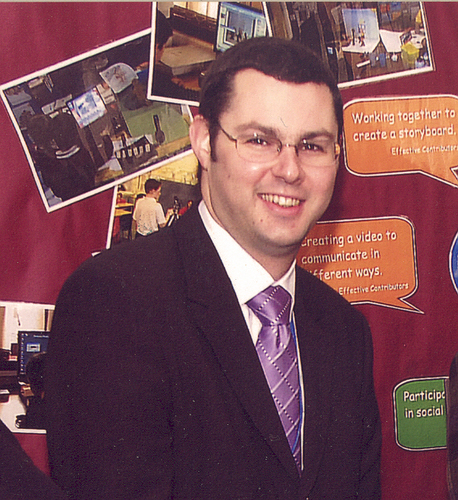 Developing relationships with their schools and knowing which member of staff to approach depending on the idea/tech and the stage the idea is at, building a network of early adopters, staff who are comfortable with technology, know that new products are "suck it and see" situations. It's all very impressive.

They then provide feedback and ideas to enhance the tech for the mutual benefit for them and their colleagues.

Sustainable Technology... Or Product Market Fit
When you look at why they are such good evangelists, they would say they ask "will it work in the classroom?" "Is the technology sustainable?" and "will it be affordable and scalable?"

As our experiences differ slightly I would label their "is it sustainable" comment as them asking themselves and their colleagues "Has this product achieved Product Market Fit".

I would have said that the approach they take is the same as why Apple Pay gets 72 million downloads within 24 hours. Malcolm and Stuart "Ship early" on a small scale then make decisions based on the feedback they get.

They look for product market fit. They diligently assess technology in a small scale with the right groups and as they get feedback and identify:

1) That it works and that the level of expertise required makes it accessible to all
2) That their small scale pilots identify the best product/model/approach - a test of change.
3) These pilots identify and fix any potential problems and bugs with the idea/product.

Then they scale, then they roll out, they provide training for staff and "evangelise" the idea and encourage other schools to give it a try. The approach above means that they have developed a track record for identifying useful tools so they have won the respect of their schools.

I don't know what other Local Authority ICT managers or District Tech Integration advisors make of this post, or even if they see the genius in it but... as far as I am concerned it is 100% total and utter genius!
The title of my EdTech report is called "DevelopingRelationships and Delivering Value" and a key message from this report is that;

"Sales & marketing departments must refocus away from selling products and toward creating relationships. Partnering with customers is a key component. The primary challenge here is not technical, but cultural"

Something else that I highlight in my report is an extract from Doug Edwards book, I'm Feeling Lucky, which details his experiences as Google employee #59

“I learned that the obvious solutions are not the only ones, and “safe” choices are not always good choices. I had thought that due diligence meant finding the product most people relied on, then putting pressure on the vendor to cut the price. It never occurred to me to talk to a start-up, even though I worked at one. It never occurred to Larry not to do that. We had different tolerances for risk and different ideas about what two smart people working alone could accomplish in a complex technical area – and that is why I spent 7 years working in mainstream media while Larry found a partner and founded his own company. Two smart guys working on complex technical problems, it turns out, can accomplish a hell of a lot.”

Now I've focused a great deal on Falkirk recently, should I be worried about alienating others by focusing on this dynamic duo?

I don't know if I should, but I'm not. This is the way that startups operate. They trust their teams to get on with things. I think that there would be more innovation if more people did this.

"I met Eric Mazur, area Dean for Applied Physics at Harvard University, and was surprised to discover that many of our country's most innovative ideas about education come from this one physics professor"

While I have met others who are also very innovative in the last few weeks, the model has been the same (and is what Chris van der Kuyl mentions in his keynote), that it's entrepreneurial teachers who are off exploring new ideas and areas of practice... asking "What if..." and exploring the possibilities. Failing fast and failing cheap, but also scaling when an idea looks promising.

So while I am impressed with the culture and the sales hustle of this team, it's also the dynamic and approach that I am a fan of.

Cultural Conditions
I'm not sure how long this sabbatical with focusing on Scottish education will last. It's difficult to keep the cultural conditions going with things like this... But it's worth trying as the kind of culture shift that is possible in these conditions is significant.

Whether looking at the conditions of a situation or a team, I always look at culture first. Sometimes it's the culture that informs me that great work is going on, other times I see great work and track it back and find a great culture.

When I saw Malcolm's blog post Twitter for Schools and Classes I immediately recognised that a lot of time and work had gone into, not just the post, but the work behind the post. As I explored the data I became more impressed with the post, the work and the people.

Regular readers/subscribers will be aware of my political views and the reason I got involved with the referendum was because culturally the conditions could have allowed some Jane Jacobs ideas about diversity and tolerance to thrive.

Scottish Education
On the 24th September the conditions for change in Scottish education were ideal, people were buoyed up by some of the Scottish Learning Festival presentations. Today the conditions are still good.

However, in my opinion in the next 2-3 weeks any chance of the kind of large scale culture change that could be possible in a relatively short period of time could be gone... And my input/involvement will be gone with it.

Is this because I don't care about education or education in Scotland? No, of course not! But... at the same time, I've already made the mistake of spending two years trying to make ideas work in FE. My ideas went nowhere, the time, effort and work on these projects was completely wasted.

I may not be a big important person, with a big important title, but I've got better things to do with my time than to waste it... or worse, waste it by playing the kind of politics some of the good and the great that #FELTAG decided to play.

I get the impression that some in Scottish education are impressed with what I've achieved in only 4-6 weeks of operating in this space, here's a little secret... I've cheated!

I'll go build on my experience where the conditions are better and return when the possibility for momentum returns. In the mean time I am extremely confident the ideas from Chris van der Kuyl's keynote is possible and could possible within a relatively short period of time... especially when you have teams like the one on Falkirk.

Posted by William Jenkins at 02:03