This post details how I have been pleasantly surprised at the way that Education Scotland has treated a dissenting voice, and how their current consultation with the Digital Learning Strategy seems "a bit different" to when I have experienced these types of consultations in the past.

My posts must seem a little eclectic this week, from helping to promote the Digital Learning consultation to questioning what the outcomes might be:
But then I questioned if the Scottish Government and Education Scotland's new initiatives will work or if this will be "more of the same" and/or if we should be looking to tech companies more than government initiatives for potential solutions.

Why the more controversial post "Innovation in Education: Tech Companies & Government Initiatives" in amongst others that were more positive, upbeat and helpful?

Digital Learning Scotland Consultation
Through some of my recent activity I was invited to attend the Digital Learning Consultation that was taking place in Glasgow the day after publishing this post. I wanted to make sure that people leading the consultation knew where I stood with this ie I'm happy to pitch in, but was (Please note the past tense) a little skeptical given my previous experiences with FE initiatives and consultations over the last few years. 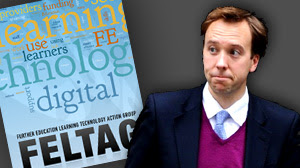 Previous experiences being that there is "a consultation process" but I can't quite figure it out how it works. It appeared that only certain voices were heard and there were pre-conceived ideas that may have been taken forward regardless of what the feedback was from the consultation... and that's before the politicians bend the findings in a way that would allow them to give some fine speeches.

It's a spark that could lead to opportunities that facilitate big changes. Not big pointless changes... but the kind of big changes that educators would like to see.

I got excited about Scottish Education after watching Chris van der Kuyl's Scottish Learning Festival Keynote, but that's not the reason I got involved.

The reason I got involved was because a couple of people engaged with me after writing a post that was critical of Developing the Young Workforce. I can tend to be a little bit snarky in some key posts, this is for quite a specific reason... to see how people react.

Two people came back to me on this post and said "You're right, I agree with what you're saying." It takes a pretty open minded person to say "You're right to be critical of the work that we're doing at the moment" and/or "Yeah, we know we don't have all the answers... We'd welcome your input"

I thought that after writing my post on Wednesday that it would be met with comments like "Who do you think you are to say 'this won't work" or other kinds of intense dialogue.

This didn't happen. What did happen is that people empathised with my previous experiences and continued to engage with me. Why do I think this is?

Because Education Scotland has seconded people with classroom experience on this initiative. I don't think educators would knowingly put in place a policy that they felt would be "more of the same." Another benefit of this is that;

"There's one thing that teachers value... the advice and input from other teachers"

Open Minds and Open Consultation
So my Developing the Youth Workforce and Circle the Schools post was a little snarky and people engaged with me. The post I published on Wednesday could easily have been seen as argumentative, maybe even controversial... although I maintain that I was simply asking some questions that appear obvious ones to ask.

The comments were welcome and the sentiment was "We appreciate this and we want to change this."

Is a comment that David Robertson uses when describing how Lego treated Mads Nipper, here's what happened;

"An animated, energetic executive who can be strikingly candid, Nipper was not shy about voicing his distress. 'Duplo was the second-strongest toy brand in northern and central Europe after LEGO... And we in all our wisdom decided to kill it' Nipper observed
In 2002 the infighting boiled over. Nipper and three other heads of the company's markets got a call to report to a suite known as 'the firing room.'If you were employed at LEGO and were summoned there, chances are you'd be unemployed when you left.
For months Nipper and the three executives had continued to press their case against Explore... The dissenters were delivered an ultimatum if they didn't shut up and loyally support Explore they would be asked to leave"
In 2004, when LEGO was deeply mired in financial crisis. Kjeld Kirk Kristiansen might well have been tempted to banish the bearer of such relentlessly negative news. Instead he offered Nipper a promotion: head up marketing and product development.
Nipper believed that LEGO had to become far more adept at letting customers help the company determine what the market wanted, instead of executives deciding what customers should want.
But all Nipper knew when he took the call from Kristiansen was that he was about to shoulder a weighty responsibility. As the overseer of all of the LEGO groups product lines, he would be the point man for resetting the company's direction"

I've been pretty snarky and critical in some of my posts... but these guys are still keen to hear my views.

Furthermore, there were two comments that Jim Fanning made in his closing statement during the consultation on Thursday;

"We need to collaborate and hear from as many voices as we can on this consultation" and "For the sake of the learners." Attitudes and comments like this remind me of Dave Logan's advice to "identify your core values and align them with a noble cause"


With regard to this consultation with Education Scotland and Digital Learning Scotland if it's a case of;

"We'll Collaborate with anyone and everyone so that we identify and implement the right technology in schools for the sake of our young people's future" (Even the dissenters!)

That's a message I can get behind! I've already explored how my core values have helped inform how and where I'll pitch in with this agenda (See Using Core Values to find a Brands Voice)

What are the Issues? Are there Exceptions?
The other thing that I liked but have not seen too often (But admit my experiences are limited with these things), is asking "What are the bright spots? Where are things working well?"

Indeed with the entire line of questioning it seemed that it was definitely a case of "When you don't have all the answers, make sure you ask the right questions"

One comment was "It's the same people asking the same questions that we were asking in 2009"and the articles and research that I've read would testify to this, with one exception... Startups are coming.

Compare Simon Buckingham Shum's "Social Learning Research" when he was with the OU in 2010 with what Declara is doing in this article "Spark Social Learning."

Education is facing all kinds of budget cuts but we have the somewhat ridiculous scenario of;

"MOOCs were started by two Canadians - George Siemens and Stephen Downes - at the University of Manitoba in the fall of 2008... [Today] Colleges and universities all over the world are buying back the innovation that their ideals, missions and people made possible" Reclaiming Innovation

Whatever the reasons, whether it's because;
I've been pleasantly surprised at what I've seen. This consultation feels "A bit different".

Dissenters Needed: So we can go Slow?
As I state in my EdTech report, I actively seek out the voice of people who are not tech enthusiasts. I ask people who will ask the difficult questions if I ask them "What do you think of this product/tech/idea?"

If I can't think of any "What if..." solutions to their concerns then the perspective of the technology "Laggards" could help prevent the tech enthusiasts from procuring a technology solution that was always going to hit some problems further down the line.

I'm sure that a lot of intelligent people made what they thought was the right decision with this... and the decisions probably were 100% right based on the information they had. But something was missing and could have prevented this from happening: The voice of the dissenter.

The perspective of people who are not as proficient with (Or are not fans of) technology are needed here.


In group situations, the presence of a blocker can actually make the decision making process more rational and less likely to go off the tracks. It gives us a new appreciation for someone who tends to play “devils advocate” ...Although no one is likely to win a popularity contest by playing the devil’s advocate, businesses would do well to respect a dissenting opinion – if not straight out encourage someone to take on such a role. The dissenter, of course, is as likely to be wrong as anybody else, but the discussion of the points made by the dissenter can add perspective to the debate. Sway

Furthermore, I think these voices would be welcome in this consultation. If the only feedback is from those who are proficient and are fans of technology who get involved with the consultation then the same old problems could persist... despite the best efforts of policy makers (On this particular occasion... Couldn't resist).

Culture Fatigue?
Based on my experiences in FE I found that people didn't take part because they were a little bit fed up... How fed up? When I got emails that were undeliverable I sent messages via LinkedIn and asked "Are you still at the college? If not why not?"

The answer was overwhelmingly "Because I got sick of the culture... I was tired of putting work into this initiative and that (Every Child Matters, National Indicators, The Big Society etc)... only for the priorities and goal posts to change and/or the initiative to get scrapped so all the hard work was wasted and now my colleagues are being made redundant, I'm expected to do more with less"

I guarantee that I have a "Why should I bother pitching in with this" story that would rival the best of them!

I am also realistic enough to appreciate the chances of success may be questionable this time round, after all the consultation will involve politicians somewhere along the line... and they're sure to do their best to muck things up.

But here I am I'm pitching in with #DigiLearnScot all the same.

I'm going to spend some time seeing if some of my Scottish, UK and connections further afield (Both proponents and detractors of technology in education) will take a moment to offer their input by completing this: Consultation on the development of a Digital Learning and Teaching Strategy for Scotland

I hope others reading this will take time out to do a "5 minute favour," to do the same. Taking the time out to do this will only take a moment, but could have a big impact on others. If you're a Scottish educator, you may be doing yourself the biggest favour of all, because you *just might* get some workable policies and good ideas to implement in the classroom.
Posted by William Jenkins at 03:38