When I said that I would be exploring #Get2ISTE again in 2016 I was asked why this and crowdfunding PD for the UK Digital Citizenship Summit had limited uptake, my reply was that this has been one of the more successful projects that I’ve worked on.

The reason for this is because since working on the idea I’ve seen it go from:

2013 - Educators being resistant to the idea

2015 - I was chastised for “Promoting my own stuff” on a popular Education Twitter chat hashtag, but managed to get support for 4-5 educators for Get2ISTE... but most of the support here was from friends, family and colleagues.

2016 - Digital Citizenship advocate, Timmy Sullivan and #UTEdChat moderator, Derek Larson were supported financially via Rosetta Stone, Kyte Learning and ClassDojo not just for a conference but one that involved transatlantic flights.

ISTE have include Get2ISTE as a possible way of making it to the conference this year in their 5 Ways to Fund your Trip to ISTE2016 post as well as a few other initiatives.

My reply to why this hasn't worked was that:
"Three educators heading to ISTE through alternative funding via #Get2ISTE has proven the concept could work and could be worth further exploration.But will the idea be successfully rolled out or adopted? As this is a new way of doing things, the odds are not necessarily favourable. This post looks at ways that educators who are interested in seeing this model work might want to consider using to put social proof to work at ISTE this year" "As long as educators are willing to deliver $20,000 worth of value to suppliers for the cost of a T-shirt, then crowdfunding projects like #Get2ISTE might never become mainstream"
While progress has been made and it's great to see the initiative getting a better response, the idea has still had it's critics this year.

When working on the UK Digital Citizenship Summit there were a number of criticisms about crowdfunding and trying to get US educators to the event and questioning why I was trying to involve overseas educators and/or why I would want to involve suppliers.

I'm sure that these detractors didn't appreciate something that I highlighted to people who took the time out to talk TO me regarding this... as opposed to talk ABOUT me:

THIS HAS NOTHING TO DO WITH MONEY... AND EVERYTHING TO DO WITH USING THIS SUPPORT TO DEVELOP A RELATIONSHIP!!
In addition to this, as I've highlighted a number of times in my blog, thatAdam Grant highlights how educators can be "selfless givers" and how this can lead to burnout in his book Give and Take. With this being the case, to what extent would someone saying "To thank you for all your time and support we'd like to send you to ISTE" and meeting with colleagues in the summer help to recharge the batteries? 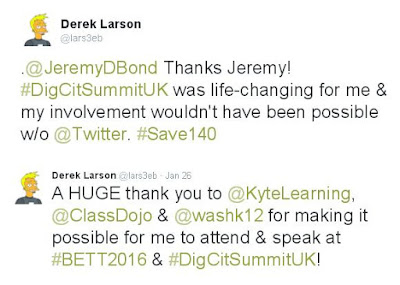 I've had a bit of success with a few initiatives recently which I put down to understanding the importance of momentum and knowing when to test ideas, when to shelve and/or abandon projects... and when to put some hustle in. It's time to put some hustle into #Get2ISTE. Here's why...

The Free Ride is Over
In his blog post "Customer Communities Don't have to be Complicated" Bill Johnston suggests that:

"If your overarching community strategy is predicated on massive quantities of free labour from your customers, I'm sorry to say the free ride is over"

This is something that I agree with, it's one thing to help a struggling start up out but when companies are benefiting from work that see educators being out of pocket for... surely some questions need to be asked about the existing model. (See ISTE2016 Sessions below).

I don't think it's so much a case of understanding that the "Free Ride is Over" but more that they simply value educators time, but one organisation that seems to be ahead of the curve here is

Kyte Learning
As a proponent of the #Get2ISTE model I'm keen to ensure that the early supporters get a return on their investment and had the pleasure of having a Skype call with Kyte Learning Co-Founders Asher Sume and Brayden Wardrop recently.

I'll be discussing details of our discussion in a future post, but for the purposes of this post, it was obvious how much these guys value educators time... and Kyte Learning are putting their money where their mouth is!

When you agree to start working with them you are given the tools needed to produce PD courses AND they set money aside as a way of thanking educators for taking the time to produce PD material for others to benefit from as well as for educators advocacy work.

After finding out more about Kyte Learning, it came as no surprise that they were one of the first companies to prove this model!

ISTE2016 Sessions
Another project that I've been working on for the last 3 years and is gaining in momentum is curating ISTE data during the conference.

As part of my preparations for assessing if and how ISTE2016 data can be curated I've been looking at the pre-event information and see that there are a number of sessions where educators are advocating for suppliers services. Some of these sessions are "Sponsor Activities" where supplier reps are probably involved, there are other session where the company may not be involved.

When looking at the 2015 sessions I notice that there were a few sessions that were cancelled, how many of these were cancelled because presenters were no longer able to make the trip?

How much value do educators delivering presentations like this add to the company? Enough to justify a little #Get2ISTE support?

Does it make sense for educators to deliver presentations like this and covering the costs out of their own pocket while for profit companies benefit from the invaluable word of mouth referrals?

Is Bill Johnston right? Is the free ride over?

The value proposition for suppliers supporting educators in this way made sense to me 3 years ago and continues to make sense to me today, but the timing may be a little better this time around.

Therefore, I'll be putting a little more hustle in to assess if and to what extent the "free ride is over" because #Get2ISTE's time has come.

If you're an educator and are interested in exploring #Get2ISTE please feel free to complete this short Get2ISTE Educator Survey and we'll be in touch.
Posted by William Jenkins at 04:27