The Problem with EdTech Review Sites

My blog this year has been dominated by sales and culture issues regarding the adaption and roll out of EdTech. All of these posts revolve around the inefficiencies of traditional methods and in support of the pioneers of alternative roll out methods.

Anyone who has read my blog recent may have seen my EdShelf post and EdSurge post, and may see this as me supporting and/or endorsing two competitors at the same time. Would it surprise you if I were to say that I don't see it that way?

What would you think if I were to say that I don't even see them as competitors? I see EdShelf, EdSurge, Graphite, Tinker Ed, Junes Labs and anyone else looking at peer tested and reviewed roll out models as potential allies.

Furthermore I would argue that a lack of collaboration may, by default, mean that traditional models will prevail (Or at least prevail for longer than they could or should); It is my belief that it is in these companies best interests to work together, that is at least until the market consolidates. Then they can take the gloves off and fight it out. Lol.

My line of thinking is influenced by the fantastic Tribal Leadership and their Stage 5 teams, which account for less that 2% of workplace cultures.

Most teams in the tribal leadership have some kind of competition that they use to identify themselves for example, Stage 4 teams have the attitude of "We're great, they're not" (Maybe rivalries like Coke Vs Pepsi, Apple Vs Microsoft), but when the researchers discovered the first Stage 5 Team, Amgen, when they asked;

"Who are your competitors?"
"We don't have any" was the reply
"That doesn't compute? That's inconsistent with our findings, you MUST have a competitor!"

Eventually the following reply was offered;

It's not that competitors don't exist; it's that they don't matter. Values, which are also important in Stage Four companies, are vital in stage 5 companies.

Here's their secret, according to Tribal Leadership, Stage 5 companies;


"Identify core values and align them with a noble cause" They have the advantage in seeing beyond the competition and aligning themselves on a noble cause. According to Mindy Watrous, CEO of Colorado Special Olympics, "People who work in these organisations support anyone. They elevate people within their organisation and others. They celebrate everyone"


What would a "noble cause" look like for EdTech review sites?

Competitors and Noble Causes in EdTech

"To make it easier for the great tools to get into educators hands and more difficult for the inefficient EdTech" to run any ineffective, bad tech out of town. Even if this didn't sound appealing, what if we stop for a moment and ask:

Who is the real competitor of review sites? Is it other review sites?
Or is it the old, inefficient models that allow poor products to thrive?

The review sites that exist today are pioneers in what they are doing. Most are based in Silicon Valley, so an example from the State's early settlers may be particularly apt.

The state was founded on tolerance, individualism and the hopes of striking it rich during the Goldrush. While it may have been "every man for himself" once they arrived, these pioneers traveled together in wagon trains as the journey was so perilous... safety in numbers and all that.

What's more likely in these early stages of EdTech review sites; that any one single site will become the de facto market leader while competing against traditional sales AND other review sites? Or that the agenda and mission of review sites will be realised quicker with a massively collaborative effort? Which would be accompanied by untold benefits and advantages (yes untold and, no, not an exaggeration).

If nothing else competition at this stage is a healthy thing for users, it might be argued that if the market consolidated too quickly then innovation would decline... there's nothing like a little healthy competition to keep you on your toes!

Even when the market does consolidate there will be room for more than one distribution channel, in Tech we have Google, Apple, Microsoft; Online movies are distributed by Netflix, Amazon, Apple amongst others.

Collaboration or Survival?
Shared core values and a noble cause isn't the only 24 carat gold nugget of information that the treasure trove that Tribal Leadership has to offer.

They have a 3 stage 90 day strategy that could act as a road map regarding how and why collaboration with review sites makes sense.

1) The Educators using review sites are the early adopters which incorporates less than 20% of any overall market. If these people are only using one review site it will take a lot longer for any one review site to reach the main stream mass market. Compare this with the impact and reach if all reviews were to appear across all sites.

2) There are only a few EdTech products that see the potential of review sites compared with their own sales force, so any revenue that these sites are chasing is from a small market place. Then there's the fact that most review sites are still exploring viable income generation models.

More reviews would lead to sales, which would prove the model and see other EdTech companies switching some of their sales and marketing budgets to review sites.

3) If we take the experiences of "Crossing the Chasm" into account anyone who is focusing on a US wide strategy may not win out in the long run. You should be working in a manageable tightly bounded market. Going for the mass market straight away rarely works out.

Facebook started out working with one college at a time, not moving from one college to another until they had 50% of the students signed up. Walmart conquered America by working in one rural town at a time, when they had achieved this they moved into urban areas until they were the market leader.

Too many sites working in a target market that's too big, but who are all chasing a customer base that is too small to accommodate them may see a prolonged period in the Chasm... all the while the inefficiencies that they are looking to address and ineffective EdTech that they help roll out perpetuates.

I've worked on this and studied all aspects of making this kind of model work. Unfortunately I've also accepted that it won't work in my area of education as these ideas are too early for it... I've been trying for a year and a half and may need to admit defeat, it's just too early...either that or I'm not communicating the benefits very well.

But ALL of the review sites have a chance in the US... but I feel that their short term goals and short-medium term future will be better met with collaboration. What happens if EdShelf does go into liquidation? What happens to all those reviews? How much further would EdSurge and Graphite's goals be with that data? How big would the combined reviews of EdSurge, Graphite, EdShelf, EdTechReview, AppoLearning, Tinker Ed, Junes Labs and others working on alternative methods be? Big enough to cross the chasm? 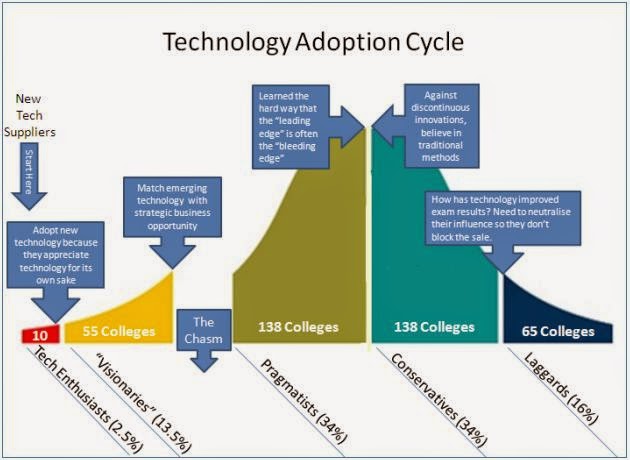 There's plenty of time for jockeying for position and fighting for supremacy once the war has been won. This is why I do not see there being a conflict of interest with speaking to and being a fan of EdSurge, Graphite, EdShelf, Tinker Ed or Junes Labs... I'm connected with and have had discussions with all (except one) of them. This is because, for me at least, collectively they are the good guys of ineffective EdTech and inefficient roll out.

If there are any "Stage 5" EdTech review sites or people working on alternative roll out methods out there, please do get in touch.
Posted by William Jenkins at 04:57