This post includes what I hope will happen when trying to develop the idea of a Skype Master Student initiative to the stage where it becomes a good idea so that others will get involved and run with.

The next stage is to take Sam Conniff's advice in Be More Pirate and try to engage one of the groups that - for various reasons - is a tough audience for me.

This post, like my previous one is more cathartic and 'thinking out loud' as much as anything. It details what I would like to happen... but will, no doubt, hit road blocks and/or may take a few attempts.

My own kids' school(s) should not be a tough audience for me - just like this post, like the one I wrote last July, should be a single paragraph:

But I've found that's not how things work. Four years ago I would have (and did!) scratch my head about how and why it was so tough. Nicole Yershon articulates this very well in her fantastic book about creativity and innovation.

"We were laying the road as we go along and to write a PowerPoint to explain it, is actually quite difficult" Rough Diamond

So... What if you have ideas but don't have a voice?

To give just one example... What if you agree with people like Chris van der Kuyl that 'Education lacks leadership*' and agree that you feel there would be a lot of benefits if Scottish Educators were to collaborate more.

However, unlike those who do have a voice, you are not a position to simply give a fancy keynote speech at and think nothing more about it?

One piece of advice was to 'Keep Telling your Story' but, thanks to the person who gave me this very advice, I've since found that those who do have a voice will take the story and alter it

"You have to be sure to tell your side of the story... Because if you don't, the truth will be invented by other people to get the credit" Nicole Yershon, Rough Diamond

So it would appear that there are two options...

1) Just give up and conform.

"Most inventors and enginners I've met are like me - they're shy and they live in their heads. They're almost like artists. In fact the best of them are artists. And artists work best alone where they can control an inventions design without a lot of other people designing it for marketing or some other committee. I don't believe anything really revolutionary has been invented by committee. If you're that rare engineer who's an inventor and also an artist, I'm going to give you some advice that might be hard to take. That advice is : Work alone.You're going to be best able to design revolutionary products and features if you're working on your own. Not on a committee. Not on a team." Steve Wozniak via Susan Cain's fantastic book "Quiet"

Work on an idea until it becomes a good idea to 'Flatten the path' and 'Lower the barrier' to help others... until the rationale for the idea is beyond obvious and the value in exploring it no longer needs any explanation at all.
I've come REALLY close to the first option in the last 12 months, including last week.

However, a kind word from various groups of people in my network and two experiences with my kids have helped.

The people who have provided a kind word know who they are - if anything happens with this going forward it might not have without your input! TY - The two experiences with my kids are below.

I "lack presence," I've done the 'stand up and pretend to be an extrovert' stuff on sales calls and at conferences... I'm neither a fan of public speaking and find current sales practices to be so 1980s Gordon Gekko... and, if you take a look at companies that scale well you'll notice that the times they are a changing.

Another reason I didn't get involved is because what I was working on wasn't quite ready.

It is now ready, but the timing might not quite fit in with the schools World of Work Day schedule. So unless a rule or two is broken, they might not hear about the exciting summer that one of their young students has had.

When I picked my son up from school after his World of Work Day, I asked:

All games and tech that he likes... answer to each question was 'No' until I get an exasperated

"Look Dad! No-one from any technology companies were there today! OK!"

“Our children and young people can access more information at the click of a button than at any point in history” John Swinney, EdTech50 Schools report... along with a link to my previous post: The Choice.

As Twitter highlights all too well, it's easy to criticize and leave things there... complete with a cutting comment or an insult ("Words on a Screen Hurt" Howard Rhiengold Virtual Communities).

But I asked these things as I felt I was working on a solution to this lack of tech companies at the school's World of Work Day.

When Agent Isaac turned up to Westquarter Primary School on his DigCitSummit SpyQuest Mission Classroom Skype Call to model the movements aim to 'Act Locally; Connect Globally' I envisioned inverting this so that once he had connected globally it would help locally with this very issue.

"When we set  out  to  create  a  community  of  technical scholars  in  Silicon  Valley, there wasn't much here and the rest of the world looked awfully big.  Now a lot of the rest of the  world  is  here" Fred Terman, The Father of Silicon Valley.

The end of this post highlights that we're now ready to go with this as soon as others are ready for the idea.

The Joy of CEX... And Breaking Little Rules
I've delayed writing this post as I knew that if I hit 'publish' I'll see it through, because I would hate to get the support of others only for me to say

"I'm tired, I've had enough... I'll only get the same results as previous attempts"

A trip to the game shop CEX with my teenage son at the weekend helped with this. Here's the story...

Teenage son had most of the money for the game he wanted.

He then had to haggle for the rest in the shop but telling me why he felt he deserved the additional amount he needed (It took a while, it was a fierce negotiation!)

When he secures the additional funds I then see that the game isn't quite age appropriate... Great opportunity for confidence building, thinks me... as well as to encourage a little Be More Pirate rule breaking too.

We're talking about a quiet kid here... a real introvert, he'll avoid things like going up to any counter to pay for something if at all possible, so suggesting that they go up to the counter while breaking a rule?

Well it almost never happened, at one point he put the game away and walked out with the money... talk about cutting your nose to spite your face! Or - more like it - talk about a stubborn streak!!

EVENTUALLY I get him to go back in and give it a go... saying "any problems and I'll go in and get it"

10 minutes later he comes out looking pleased with himself and a little more confident... complete with game in hand and a receipt, then says

"Well last time I tried to get a game in there they asked for ID and I had to wait 30 mins for Mum to come and get it for me, so you can't blame me for (Being a stroppy, stubborn teenager) not wanting to go up to the counter by myself"

So, like said stroppy teenager, there's a good chance I'm older and wiser too... there's also a good chance that the next project(s) I work on will pan out differently too.

Or if you prefer the #EdTech50 Schools report:

Progress
I know a student at one of my kids' school who has been busy connecting with people globally and could help with local initiatives like their World of Work day.

In addition to this, if Shane Snow and Sam Conniff are right that Story Telling will be the #1 Business Skill of the next few years and that we should Tell Tall Tales like Blackbeard, we think this one is pretty awesome:

A 7 year old student connecting with @TolleyA in Tennessee and having their work presented at one of the world’s biggest Edu conferences and helping local #EdTech50 entrepreneur @GoutcherD with his @SpyQuest Mission to encourage reluctant readers to explore the world of books. 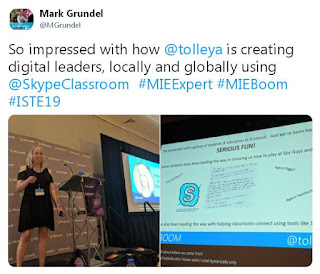 The Plan
To arrange for some people who have been involved with some of these projects to drop into the school to discuss their World of Work with this young Spy Guy Pirate Piggy and his class and have those who live a little too far to be there in person (But are close to our hearts and never far from our minds) to Skype in to say 'Hello' and discuss their world of work too.

I have 5 main groups in mind, that I think would work well, and would take up about an hour of the school/classes time.

Skype Advocates
This could include Scottish Skype Master Teachers, people from Microsoft/Skype, Virtual Field Trips, Authors or people who are fans of events like the Skypeathon.

Authors
This could include people who are Digital Citizenship experts and/or people who are exploring digital transformation/the future of work. People like Nicole Yershon, David Goutcher, Sam Conniff, Mark Babbitt, Susan Bearden among others.

Gamers
We are seeing all kinds of ways that people are finding a way to make a living with games, whether through Youtube/Twitch or the Fortnite World Cup. Agent Piggy wants to move to Tennessee so he can play Minecraft in class, I am sure there are less drastic (And more affordable!) options... perhaps starting with having people like Immersive Minds Stephen Ried and Global Minecraft Mentors like @TolleyA and experts like Sherry Jones skype in to discuss how they use Minecraft and other games in education.

SkypeMS Fans
We have a group of people who really like the idea of a 'Skype Master Student' idea to help the Skype Master Teachers to help other classes and schools to make that all important - but, like anything that's new, nerve wracking! - first call.

Date & Venue
In an ideal world the date for this would be the 2nd September as a few people who would like to be involved are available on that date.

I would love for a call like this to take place at one of my own kids' schools... But appreciate that things don't always go to plan. I always try to plan for the best... prepare for the worst.

That's no different as I try to take the Skype Master Student idea from an idea -> to a good idea, by trying to tell the best EdTech Stories that I possibly can... Even if it does involve breaking the odd rule or two ;)
Posted by William Jenkins at 04:07