This is a post about what happened when an EdTech Startup JAM's (Just About Managing) who's having a rough time had an AWESOME day out with his 7 year old son and discussed ideas that were inspired by the amazing Andrea Tolley (@TolleyA) who lives 3,900 miles away from us... but who just might have inspired a Skype Master Student!

On a Skype call with Tim McDonald (@tamcdonald) when trying to explain the rationale of establishing a #CMAD for education, I say something like:

And that in a nut shell is what I'm working on in between seeing where the wind blows with the troubles that come from some failed EdTech startup ideas and, like many have a startup, proved to have been a bit of 'Optimism Bias.'

Nevertheless, one more project *Just Might* see the goal of having his kids being able to make a Skype call at their schools a reality.

On Tuesday the monthly Microsoft Twitter Edchat took place (#MsftEduChat). The topic was all about Student Voice, and how tools like Flipgrid and Minecraft gave students a voice... there were only a couple of Scottish educators involved in this conversation. So how do we change that?

Here's an idea... Take a leaf out of Jane Jacobs book:


"I put a great deal of faith in young people, they don't have as much trouble accepting new ideas"

Here's a very personal example regarding why this makes a lot of sense...

So we're having a few challenges at the moment because EdTech is tough, and so is startup land... EdTech startups in Scotland are non-existent, as are jobs in Community Management.

Throw in the odd company that decides not to pay you and you're a rung or two below the JAM line.

Zero money and lots of stress mean that it's important to try to help the kids make sense of what's going on and why.

I'm fortunate enough to have some people that my kids have come to know and respect, who do see the value in what I'm doing. On Sunday we took a walk to discuss growing up in Scotland.

"So some people don't see the value in what I've been doing" Says I to my 7 year old son.

"But others do... Remember what Agent Jones (@GoutcherD) told you about my work after your Spy Quest Mission (@SpyQuest)?" I ask him

"So who do you believe? Is one of these groups lying?" I ask

"Maybe it's somewhere in the middle" he suggests

We then talk about how Henry Ford would have been seen as a crack pot for thinking that cars would replace horses... and I ask how many horses he can see on the road today as we walk and talk.

Much to the delight of a 7 year old, I ask if he'd believe me if i was to say that the issue of the day was that there was too much horse poop on the road - was an environmental and health concern back in the day - as was the issue of horses if they fainted from exhaustion and caused traffic jams.

We talk about how some people would have continued to make saddles, living in denial that their industry was in decline, and I share the advice from Adapt or Die: How to Cope when the Bots take your job

I ask how many lamp lighters he sees each night to light the streets, and how all those jobs would have been gone all at once, just like the call centre jobs will soon (Affecting 4% of the Scottish workforce).

After a single conversation - and at 7 years old - he has a better understanding of the "New Power" (@ThisIsNewPower) ideas that are on the way than some of the politicians that I've tried to engage, who just seem to scratch their head and go "I don't get it"

We then chat about some random stuff and have fun at the park.

Now my youngest son already knows that @TolleyA's students get to play Minecraft and do other cool stuff... He's Skyped with her at home and she's been in the middle of a Minecraft lesson and some of her kids have said "Hi"

He also remembers VERY well the only Classroom Skype call that he's ever made - which was at a different school - a Spy Quest mission which Andrea was a big part of in terms of planning and preparation etc... I know this because he talks about the day all the time! 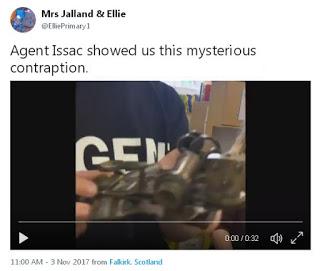 I ask if he's ever made a Skype call at his school, or if he plays any games or has access to the internet.

He plays a few games during ICT but it's mostly it's the teacher who does things on the internet.

"Do you play Minecraft at home much," A question I obviously know the answer to!

"Do you enjoy chatting with @TolleyA and Jayden on Skype at home?" I ask... Again I know the answer to this question, they have a great time.

"Would you like to talk to them at school? Maybe have them talk about Minecraft with you all? This is what you'd call 'The stupid obvious answer to dumb questions' portion of our conversation.

Then I ask the question...

How do you think you could encourage your teacher and Head Teacher to make that call?

That's what you'd call the near impossible and/or million dollar question and/or the very good question portion of our walk and talk.

"Oh! I don't know Dad!" Is the reply, with a puzzled 'I'm thinking hard here' look on his face

"Do you think you could try?" I ask... "After all kids make the best Sky Guys"

"Do you think you could go on a mission to get your class to make a Skype call?"

I wonder if there's any Skype Master Teachers or Global Minecraft Mentors (Nudge, Nudge, Wink, Wink, Oink, Oink @TolleyA), who could help a young would be trainee Skype Master Student?

...And the serious bit at the end
Like the saddle makers, times are changing for everyone... including educators.

They are under resourced, overworked and - in many cases - under valued.

I doubt they ever got taught these tools in teacher training college and the risks if the experimentation may far outweigh any benefits.I was told, by a Microsoft exec, get onto social media, it comes with the job today if you want to be in EdTech... Who is it that's delivering this message to educators?

MsftEduChat this week is a fantastic example of both the number of advocates there are and how much they love these tools that help people connect.

I'm not an educator so won't pretend to know what's involved - but through Twitter and Skype not only have I been able to connect and collaborate with AMAZING people like @Stanbridge, @TolleyA, @GoutcherD and Skype's Ross Smith... But so have my 7 and 17 year old children.

If the tech goes wrong in any way and the culture isn't positive at the school the educator may lose face and may be a reason for the lack of experimentation... But if students were in charge of organising everything?

There's uncertainty with what the world of work will look like and, if there's one thing that I've found encourages educators to take a look at new ideas its this: For the sake of the kids.

So why not take a serious look at these tools... What would be required to do this?

Simply reach out to others who do use them and hear their and their students stories.
Posted by William Jenkins at 14:23