Politicans - Wish they Ate Their Own Dog Food 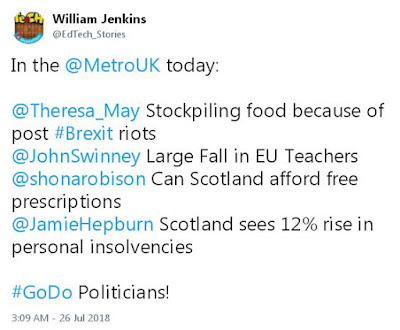 AKA we use the product/service that we create.

This post questions whether politicians "Eat Their Own Dog Food - or more accurately points out why they don't.

Pointless Politicians - A Bit of Empathy
I feel for politicians, I really do! Every word that they say on the TV, in the press or on social media gets scrutinized.

Mhari I'm-down-with-the-people-but-make-£75k-a-year-but-moan-about-the-Westminster-culture-and-the-fact-that-Nicola-doesn't-speak-to-me-either Black (The irony is not lost on me here! Lol)

Tweets out "Maths is shit" when she's at school and gets shared during The Last Leg etc.

I can easily demonstrate how I have empathy with politicians here...

In 2014 I wrote over 30 posts in support of #IndyRef, the SNP and #VoteYes... Today I'd prefer to distance myself from all those

Let's also have a little bit of empathy for the current MPs successors in 100 years time where - as has (Obviously quite rightly!) happened with slavery and the sufforagettes etc - future MPs may well be apologizing for things like the Iraq War, Bailing banks out, the "Credit Crunch," Nigel Farage and Brexit.

Having said that, I treat this pointless group the same way I do with others re: my core values.

I've "Shown my Friendship First" and will do the odd "5 min favour" even after my representative(s) have completely ignored me.

Respect for Politicians
Sturgeon, May, Trump... regardless of the country or the colour of the shiny badge there's no real difference.

I think the only way I'd have any respect for any politician in the future would be if they spent a month (Or more) each year - minus the TV cameras or PR opportunities - in the same conditions in the most deprived areas of their constituency and/or most marginalised constituents.

But unless it was called "I'm a constituent get me out of here*" with Ant and Dec presenting and a hefty appearance fee, I doubt it would happen... which is a shame.

(*If this becomes a show, please sign me up... Especially if the prize in a one way trip to CA!)

I was there man! During the buzzy #VoteYes #IndyRef and I pitched in with the #NewPower storm that the SNP didn't know what to do with - and I offered some awesome and insightful suggestions too!

I got to know some of the people who were also tweeting out and hoping for change - I heard how marginalised some people were, but how valid (And inspired) their ideas were... MPs and MSPs might learn a thing or two if they listened to them and applied some #Cmgr practices.

They take their cushy second jobs under the guise of


"Real world experience to see how their policies affects business"

Obviously, the 4-5 figure 'consultancy' fee has fuck all to do with all their


"I got into politics to make a difference"


"I help constituents every day"

There are two jobs that I would HATE for my kids to get into: Politics & Banking.

The reason: They could go into these industries hard working and honest, but the toxic cultures would change them.

Can you imagine being *Mentioning No Names* and/or [Insert name of politician and banker here] and looking at yourself in the mirror... knowing how much you've screwed so many people's lives up between 1970-2018.

Politicians & Education
We know that politicians don't "Eat their own dog food" in education, as they run state education, but send their own kids to private school.

What message does that send out regarding how confident they are about their #AttainmentGap and other grand plans?

Education Ministers
Since Tony Blair wanted to have a computer on every class desk in 1997 (See European Politicians New Mantra: Wiring Up Schools to the Internet) ...How many Education Secretaries have their been?

Go take a look at what Microsoft, Google and Apple have done in tech and in education since 1997, then compare it with the political classes.

2014: The Potential to Unslum Vs 2018: Adding to the Deprivation
As I highlighted I wrote some 30 posts in support of #IndyRef and #VoteYes.

However, I was by no means a fan of the politicians or the colour of the shiny badge... I was a fan of the #NewPower storm that they created which meant things that would not be possible in a month of Sundays today COULD have been possible then... IF The SNP had harnessed the storm (Difficult to do when you have not invested in digital citizenship or community builders!)

As I suggested at the time, if the SNP had said

Then even 1% of the 100,000 people that they boasted about having as members pitching in, would have made a huge impact. That's the potential that I saw in the #IndyRef #VoteYes movement!

Instead the majority of the most deprived areas in the UK are in Scotland... So which colour of shiny badge is gonna take the responsibility for that?

The 1970s Thatcher Tories?
The 1990s "Things can only get better" Blair/Brown Labour masters of Spin?
The 2000s President Sturgeons #AttainmentGap busting SNP?

Or will it be the usual

Kids playground antics that has come to define the punch and judy show that is Westminster & Holyrood?

That is until someone shouts


"Order! Order! You Stupid Woman, I think I'll bully someone in the playground at play time"

The potential to Unslum neighbourhoods WAS there in 2014... today Entrepreneurial Scotland talks about being the most enterprising nation in the world with areas of such high deprivation... they have their work cut out! Is all I can say!

Dumb Ass DWP
So what's brought this post on today... It could have been written at any time in the last few years?

Why, I'm glad you asked!

1) First is that I feel that I'm exploring things that politicians should be exploring, like Digital Citizenship. Instead, this is how they react: Blame! Blame! Blame!

2015: What can we (MPs who are in charge of education policy) do about Trolls? At election time ;)
2018: FELTAG genius* Matt Hancock "Social Media companies need to do more"

*FELTAG had a goal of having all FE Course material online by 2017. Progress as of 2018? Didn't happen

When looking to reskill from sales to Community Management, as there are few/no roles in #GoDo Scotland, I have had to sign on to JSA/welfare from time to time.

An Ayn Rand fan who is extolling the virtues of the free market and her brand of objectionism when scrounging off the state?

Well Comrades! You may - or may not be - aware that Marx got to write about socialism while being bankrolled by his brother in law who was the founder of Phillips TVs. Go figure!

Well when the takers and secondhanders bail their buddies at the banks out with billions within 24 hours and their #TooBigToFail crap... only to change their mind a few years (And many lives wrecked) later with "Meh, shoulda let them fail" but...

The customers of these toxic brands in a country with these toxic politicians operate but the plebs are limited by what you can achieve because of a credit rating?

Surely there has to be a bit of a "check your premises" contradiction going on:

A Rand fan on benefits...
But the people who's job it is to make money, make no money for nine consecutive years but gets nationalised.

Definitely time to check your premises!!

2) In 2015 I made the comment about how useless Universal Jobmatch was. The reply at the time?

Came the reply from my 'Work Coach' Kathleen, one of the most horrible 'Jobs Worths' I've ever had the misfortune of 'supporting' me

Easy to be a critic? Erm, when a 'Recommended job' is female toilet attendant [*Must be female*] and I'm male... Yeah! Really digging deep to pick holes in that one.

When I mentioned that call centres were on the way out in 2015:


"No they are not!" Was the reply "We have tonnes of jobs at them"

Then there is the fact that I actually got sanctioned when my efforts to get work as a community manager, not only worked... But I got sanctioned for my efforts getting paid work with a Silicon Valley startup up, go figure!

2018 Universal Job match is no more... But the new site is no better

I wonder how many politicians would "Eat their own dog food" with the kind of jobs that they allow on this site.

Commission only, door to door selling, call centre jobs with rates of pay that if it was a MPs expense account for the year they would probably complain.

When I signed on today I mentioned my attempts to get work as a Community Manager, but how call centre jobs are on the way out... and highlight:


"Just look at how sophisticated the DWP AI is"

Was the reply today (From a fantastically supportive work coach)

"I booked something today and didn't speak to anyone... it was all automated"

I wouldn't look to our politicians... I can see now why Alex Salmond is spending so much time in Russia... perhaps like me he can see the similarities between Ayn Rand's Russia as described in "We the Living" with the SNP's 2018 Scotland, perhaps he's taking notes on what he might expect next.

"Petrograd has seen 5 years of revolution (Change revolution to 'Indepencence obsession'). Four of those years had closed its every artery and every store (Take a walk up Sauchiehall street), when nationalisation smeared dust and cobwebs over the plate glass windows... The state's New Economic Policy (Wonder if it looked anything like the Growth Commission)... There were stores without signs and signs without stores. But between the windows and over bricks and boards of cracked plaster (BHS front has become storage for homeless people's stuff). On a corner, an old lady held timidly a tray of home made cakes, and feet hurried past without stopping: Someone yelled: Latest new, citizens! Someone else yelled: "Saccharine citizens!" and someone else yelled "Flints for cigarette lighters, cheap, citizens" (Try walking down Glasgow's main shopping are and try to hear yourself think with all the buskers, beggars, chuggars and shops blasting out music in desperation for attention)

It tells you something when even the pound shops are closing.In the event that any of the cybernats disagree with the similarities I see...

We already know that many of most successful Scot's leave the minute the get the chance, but when it's "FREEDOM" Alex Salmond escaping to Russia?

1297 "If this is your army why does it leave?"
2018 If Scotland's so fantastic why does everyone who can, leave the minute they are able?


"See how many people you can spot smiling or laughing"

You can see... and then see if you spot any similarities.

It's all a little different to the buzz in the air and the New Hope that #Team56 promised back in those heady #IndyRef #VoteYes & #GE2015 days.

Perhaps what happened in the 2015 UK General Election was similar to what's been suggested elsewhere since then?

Anyway, wouldn't it would be nice if our comrades in politics "Ate their own dog food," but never mind... It's not their fault, it never is! Even if it was they'd never take responsibility ;)

So don't blame the politicians... Blame me: I voted "Yes" and, as the saying goes


"A society gets the leaders it deserves"

#GoDo folks, The RBS sponsored Edge competition is open... Hopefully the government owned bank won't be closing your business - or branches - and sending memos to "Give you rope" if you're one of their customers in a few years time.
Posted by William Jenkins at 13:51