A day in the life of the internet? …Or the plot to a Toy Story movie?

The scenarios below sound like a typical day in the internet on a local and global level - whether the kind of things that educators and workplaces need to deal with, or the latest Twitter spat between world leaders and politicians with opposing views to one another.

In case some of the insults sound a little random, I'll remind you that "gammon," "salt," and slug have somehow all entered into the grown up political discourse somehow.


Many of the areas above are things that either happen in schools all the time, people have differences of opinion in the workplace and/or are stories we read about in the offline world.

But if it happens in the online world? It's all panic stations, and someone has to do something!


...And what happens if we change all the drama above and apply it to some fun characters and see how it all these arguments all panned out in the long run. 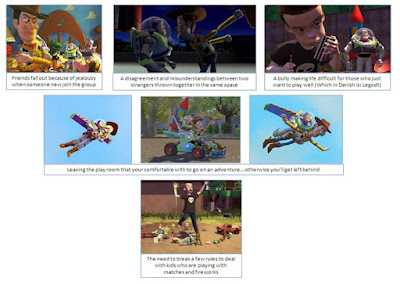 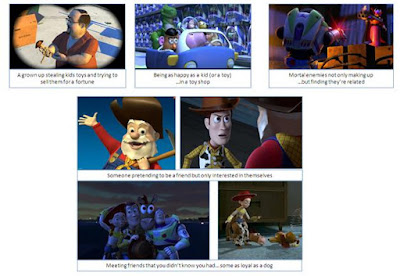 When reading New Power there was the example of two people who discovered their shared interest in Star Citizen on Reddit, they decided to start a company together.

When looking to reference some Tweets about this partnership it became apparent that was a disagreement with the young founders. 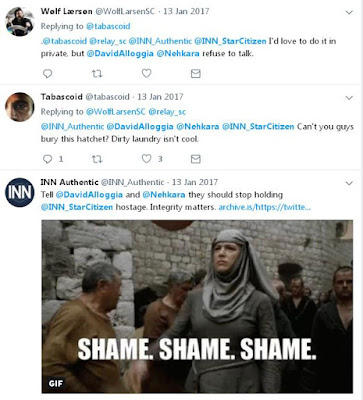 Do I say "Shame. Shame. Shame" here on these guys? That they write about how excited they are about a game, collaborate and start something? NO WAY!

Instead I ask, just as I do about educators who explore social media, Skype and organise edcamps etc, who was it that showed these guys how to collaborate online, run a company and other leadership skills? Good on them for giving it a go!

Andy's playroom had plenty of disagreements, I'd be surprised to find a school that didn't have at best disagreements in the classroom (And maybe even the staff room), at worst serious bullying issues.
Falls also out happen with grown up Founders all the time too.

As the article Why Good People Go Bad Online highlights, we're still figuring some of this stuff out. Whether things like
We all need to be doing more (Perhaps starting with modeling good Citizenship offline and online).

Why Good People Go Bad Online
"We’ve had thousands of years to hone our person-to-person interactions, but only 20 years of social media. “Offline, we have all these cues from facial expressions to body language to pitch… whereas online we discuss things only through text. I think we shouldn’t be surprised that we’re having so much difficulty in finding the right way to discuss and cooperate online.”

As our online behaviour develops, we may well introduce subtle signals, digital equivalents of facial cues, to help smooth online discussions. In the meantime, the advice for dealing with online abuse is to stay calm, it’s not your fault. Don’t retaliate but block and ignore bullies, or if you feel up to it, tell them to stop. Talk to family or friends about what’s happening and ask them to help you. Take screenshots and report online harassment to the social media service where it’s happening, and if it includes physical threats, report it to the police.

If social media as we know it is going to survive, the companies running these platforms are going to have to keep steering their algorithms, perhaps informed by behavioural science, to encourage cooperation rather than division, positive online experiences rather than abuse. As users, we too may well learn to adapt to this new communication environment so that civil and productive interaction remains the norm online as it is offline. Why Good People Go Bad Online

Center for Strategic Counterterrorism Communication
"After these false starts, the United States began to realise it needed to take a different approach. CSCC coordinator Alberto Fernandez laid out a new direction, speaking to Congress in 2015:

"You need to find a way to form loose, open source communities of interest or swarms that can swarm back and push back against the ISIS message. It's not an impossible thing to do. It can be done"

The new inter-agency Global Engagement Centre is trying to make this happen. Discarding the top down hectoring tone of the Think Again Turn Away campaign, the centre is trying to build a "Network of positive messengers" to share not just counter narratives, but alternative narratives drawing people away for more extreme positions, amplifying the messages of its partners, from religious leaders to schools.

One promising effort is the P2P (Peer-to-peer) Challenging Extremism competition, which partners with Facebook and hundreds of universities around the world. The brief here is loose: students come up with creative ways to

"Push back on online hate, prejudice and extremism while empowering their peers"

A group of Finnish students launched a movement of pop-up restaurants where asylum seekers shared their native foods with locals. A US team created a Snap Chat campaign. A class from Azerbaijan created a tolerance toolkit for teachers to use in the classroom. New Power

If you check out my #DigCit Vs the Trolls Post you'll see that I've had the kind of ideas that "Why Good People Go Bad Online" and what the CSCC suggests too.

I have some ideas if anyone would like to explore further...
Posted by William Jenkins at 11:11