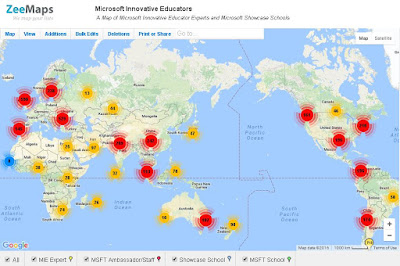 In my last post I used Pokemon Go to argue how and why I felt that innovative educators and tech companies were achieving more than our policy makers.

In this post I explain how and why I am going to be spending a little time exploring the world of Microsoft Innovative Educators, and other ambassador programs in education.

Since 2012 I have wondered whether the focus should be more on the way that technology is developed and gains traction in education rather than on the actual product.

The impetus for this was surveys like C4LPT Top Tools for Learning. In the 2012 survey I noticed that the majority of tools were free tools that were developed by major tech companies.
With the kind permission from the authors of a number of startup books I wrote a report on the topic about the importance of "Developing Relationships and Delivering Value". Every project that I've explored over the last few years has been in an attempt to do what I can to nudge these ideas forward.

In July I got a chance to review and update the ideas from this report by exploring how and why the overnight success of Pokemon Go was the result of 2 years of hustle (See the Tech Adoption Cycle section of the DigCitPLNs' Pokemon Go Back to School Advice report).

Last month I caught up with MIE Expert Malcolm Wilson, who highlighted that Microsoft was doing some interesting things in Scotland and recommended that I check it out.

So there's the first and most important reason for exploring something... I might have a bit of a rebellious streak, but if there is one thing that I'll listen to it's the recommendation of an educator (Especially one who knows how to explore tech tools like Malcolm does!).

The evidence is right there at the Scottish Learning Festival as the Education Secretary will be announcing the Digital Schools Awards later in the day. Another expensive government initiative that will get replaced by something else in a few years? No Sir! A collaborative effort between Intel, HP, Microsoft as well as the Scottish Government.

I decide to see if the data confirms what Malcolm tells me... and Boy does it! Here are some top line stats:

5,000 MIEs from across the globe
Just stop and think about that for a moment. In today's Brexit, "I'm gonna build a wall" Trumpism and all the conflict and tensions between this country or group and that... This tech company has a network of educators who are in the same space innovating and collaborating.

I'm not being snarky when I pose this question...But


How many policy makers would be able to achieve this in a few short years?

Recognizing Educators
There are a number of ways that this appears to happen from the MIE points and badge system, flying educators from across the globe to connect and collaborate and even hiring people with classroom experience to be teacher ambassadors.

As someone who has explored alternative roll out methods I have kept an eye on the various ambassador programs.

The last time I looked there were not all that many ambassadors of EdTech companies in Scotland... so was surprised to find that there are some 40 MIEs in Scotland today. Someone has put a bit of hustle in somewhere recently. This includes St Mungo's in Falkirk recently being recognised as a Microsoft Showcase School.

I'll be going into more detail in my blog about all things Microsoft and MIEs and for a number of reasons... Including helping educators who are part of my PLN, as well as to scratch my own itch.

Super User Programs
As a relatively new #Cmgr an area of extreme interest to me is the development of "Super User" programs. One that I have paid close attention to is the Salesforce MVPs as just about all of them include "Salesforce MVP" on their social media profiles.

There's on thing that's at the heart of all of this and it's the same as with Pokemon Go:

You have to start with a good product... and that involved close collaboration with your users and fans to ensure that the product/service is fit for purpose.


An Amazing Skype call with a Connected Educator

Why not check out what the educators who are already part of this network know by joining the Skype-a-thon at the end of the month:

We'll be encouraging people who assisted with the Pokemon Go report to get involved with this... and hope that they will help Scottish Educators with the friendly competition that they are having in the 3 Nations Challenge. 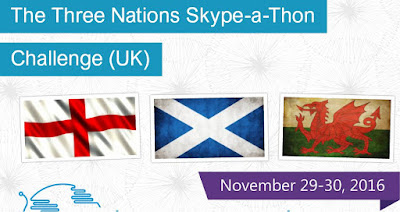 Posted by William Jenkins at 08:02