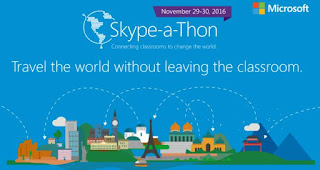 This time last year I borrowed from Community Manager Appreciation Day and applied it to Connected Educators using the hashtag #CEduAD. The idea was to have this to coincide with with Black Friday in the hope that EdTech developers and startups might have another excuse to thank connected educators for all that they do... for all the invaluable feedback and advocacy work that they do for their favourite Tech tools.

I have no idea if this is something that will take off or if it's worth doing something for this year... But this post looks to build on this idea and encourages educators and developers to connect over the next few days.

Last year we were looking for support for the UK Digital Citizenship Summit... an event that was facilitated by Skype. Given the interest in the event from people overseas we tried to get companies to cover the costs of their advocates to attend the event in exchange for these educator putting some hustle in at BETT and at the Summit.

There was some success with this through Kyte Learning and Rosetta Stone... and am truly grateful to them for this support. I've seen a lot more of this kind of thing since last year, including ISTE including this as a method of getting to their annual conference.

It's never easy to say what impact this action or that had. Did Kyte Learning and Rosetta Stone's sponsorship with this have an impact with this? Who knows, but one thing is for sure.

Whether supporting EdTechBridge, putting hustle into ideas like #Get2ISTE or questioning the need for sales calls, I've been trying to nudge the idea of closer collaboration between educators and developers for a while... the limited success of some of these ideas testify to how important getting others to buy into your ideas are.

Getting the support of those first followers sure ain't easy! But when you get them, and when the culture is right... WOW! Oh The Places you Go!!

MIE Experts... At Community!
Establishing an ambassador program is something that's kept me up at night for a while now. As always I look for the "bright spots" and, as usual, these bright spots are almost always in the world of major tech companies.

It was suggested that I take a look at the Microsoft Educator Community two months ago. I did... and so impressed with what I saw that I still am!

Whether you look at the way the MIE Network was established in 2009, the success of the community in Scotland or the 3 million miles that educators clocked up at last year's Skypeathon... it all started somewhere.

It started with those first followers and will, no doubt, have involved treating them as valued members of the team.

I hope to go into more details about what I've noticed with looking in the MIE network in future posts. For the moment I'd like to suggest something that I think will help educators and developers for #CEduAD in a number of ways.

Arrange a Skype Call with a Developer

When you call what might be interesting is that you don't talk about the "What" you do... but why you do it.

What might happen after you connect? I've no idea. When I connected with an educator we established an international event in two months on a zero budget and a few months later major tech companies were supporting the next event.

In addition to this, if you're anything like companies like Night Zookeeper, who have logged loads of miles according to their Microsoft Educator Community pages, it won't do you any harm.

Indeed, I'd go so far as to say you'd be future proofing your business... because cold calls are dead! Seriously.

It might even lead to opening up new markets for you. Few exhibitors appear to attend both UK and US based education events, so this could be a good way to reach educators in other regions.

Not convinced? Take a look at the Skypeathon map below to see how many educators across the world were making connections via Skype during last year's Skypeathon. (NB The map has links to the educators MEC page and other social media accounts). 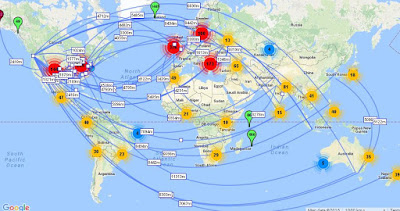 Black Friday for Edu?
As it's Black Friday EdTech companies might look to offer any savings that were made from not having to travel to meet the people you connect with over the next few days. If the educators need approval before signing off on the service provide a voucher that can be redeemed at a later date.

Educators
Why not call that company that you've put off since connecting at ISTE... or maybe there's a free tool that you'd be lost without, why not put a call in to say thank you.

If you are considering joining the Skypeathon on Tuesday and Wednesday and are relatively new to Skype this could be great practice and to make sure that everything is set up and working OK.

Obviously all the better if developers and educators continue the conversation into the Skypeathon ...and beyond. Here's a map Education Conference Exhibitors with links to their Social Media accounts: 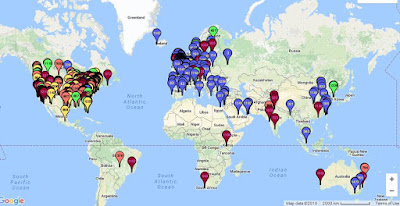 Need Another Reason to Connect on #CEduAD?
I've been following the practices of Microsoft and Google etc for a few years and two things they do differently to a lot of other tech companies include

I'll leave you with some extracts about Skype in 2007... if you think that it's an accident that people didn't know quite what to do with Skype and how Microsoft have used it to build strong relationships with the educator community, I'd say your dead wrong!

I'd like to see more companies with products and relationships like this... why not start this tomorrow, or today even ;)

"The history of successful companies is often rewritten to make it look like they tried one thing and the idea worked from the start. Most companies tried multiple ideas and products before they hit the right one. They failed repeatedly until they succeeded. They conserved capital and stayed small until they found product-market fit. Apple, Microsoft, Google et al consistently come up with great new innovations, but they also cycle through new ideas until they latch onto the right one, then they become ultra-focused. These companies build products all the time, but ship selectively". Why Startups Fail

Extracts about Skype from Peter Sheahan's book "Flip"
In the current business climate a 5 year plan could be just as dysfunctional as a 50 year plan.

Meg Whitman of eBay could not have said it better when she observed "Forget about 5 year plans, we're working on 5 day plans here." It's not that Whitman doesn't look 5 years into the future. She didn't pay $2.6 billion for Skype without thinking long term. But she and her colleagues are not following a detailed master plan, they're working out the plan as they go.

After eBay bought Skype for $2.6 billion, the two-cents-a-minute charge to call a normal phone was waived in North America for several months in order to build usage.

Instant, excellent, free: what kind of business model is that? But if you wonder why Skype will ever make enough profit for eBay to justify paying $2.6 billion for it, you're missing something. Sooner or later the technology that Skype used to create it's service was bound to be exploited in a similar way by someone. Once that technology existed, the genie was out the bottle. Not only that, but as with Google'spurchase of YouTube and NewsCorp of MySpace, the value was in the network and the relationship the brands have built with their customer base.

Skypes Founders were willing to act first and strategize how to exploit the technology as they proceeded. The enthusiastic response of custoemrs all over the world made Skype the gold standard of internet calling and created several revenue streams.

No-one can be certain yet if this is going to pay off at a level that justifies a $2.6 billion purchase price...When eBay released its first quarter numbers for 2007, first quarter net revenues for the entire company rose 27% to a record $1.77 billion, and net income rose 52% to $377 million. First-quarter net revenues for Skype rose 123% to $79 million. Meg Whitman said of Skype "This is a very young business growing very fast"

The picture looked less rosy on 1st October 2007, when eBay announced a $900 million one time write down on the $2.6 billion purchase of Skype... Two weeks later MySpace and Skype formed an alliance that enables MySpace users to make phone calls and send instant messages via Skype.

There are inevitably stumbles in any new venture, but on balance it looks as though eBay has reason to feel good about Skypes long term prospects.

Culture! Culture! Culture!
There is a business model in just owning the relationship, and not actually selling anything. In the example of Skype... Might I be so bold as to suggest that what made Skype so valuable was in fact their relationships, not their business model, which could easily be duplicated. Although Skype did not yet have profits, it did have a large and growing base of loyal users and eBay was making significant progress in monetizing the value of that customer base within a year after buying the company.

Product review sites are another increasingly popular form of middlemen... becoming trusted partners in customer purchases... As people look for advice from people they feel they can trust, rather than people they think are simply trying to sell them something. People want to do business with and take advice from people they know, like and trust. Peter Sheahan, Flip (And also author of the fantastic "Talent Magnets - Attracting and Retaining Young Teachers through Courageous Leadership).

Posted by William Jenkins at 07:17