Is It Switched On? It is at Larbert High 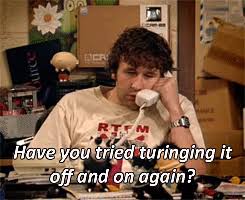 This post is unabashed and unashamed fan mail, it is fan mail about two teams who have achieved something that I have tried and failed at in the past.

It is also fan mail with a purpose, which is in support of Chris van der Kuyl's Scottish Learning Festival keynote (Yes, again! Get used to it, it's going to feature around here for a while), specifically around the idea of entrepreneurial educators exploring new ideas.

This post is about what Falkrik Council and Larbert School have achieved with social media.

The data I've been exploring this week all points to what Google employee #59, Doug Edwards, observes in his book "I'm Feeling Lucky"

"Two smart guys working on complex technical problems, it turns out, can accomplish a hell of a lot". Doug Edwards, the extract on page 34 of this EdTech report is worth a read

The dataset that I've been exploring this week highlights that Falkirk schools have really embraced social media. I highlight Larbert High School in particular in this post for two reasons;

1) They have a collective following across their 39 Twitter accounts of 17,000 people. The next closest school has 5,500

2) It appears that this medium has become embedded in every part school life.

100% Roll Out of an Idea in EduI'll get to Falkirk council's Malcolm Wilson and his extremely switched on team in a moment, first a question for educators...

Outwith tech like Microsoft Office and email, how many products or services are there in your school that almost every department or member of staff uses can you name?

This was a question I found myself asking in 2014 as my aim was to find a product that had a chance of getting adopted by every FE College.

When starting out with this plan I soon realised that there are few products I could name that were adopted by even 50% number of FE Colleges.

Even worse than this, when I asked some really tech savvy educators (who really know how to assess tech in edu) how many products they use that they'd recommend to other educators, the answer was around 30%?!

At the same time I have found products that are 100% fit for purpose in education, but when the stats indicate that around 25% of Scottish schools are on Twitter, you realise that

1) Here is a product is free, has been around since 2006 and has more case studies from educators than you would know what to do with BUT the medium appears to only have around 30% uptake from the sector.

2) Educators would recommend between 30-50% of the tech they use.

You soon realise that the process for adopting new ideas is broken. Taking these two points into consideration and you realise that


What Lambert High School has achieved is AMAZING!

The driving force behind this achievement is probably down to 1-2 people who evangelised about social media to make this happen... and I'm guessing that it's a certain Mr Doherty (@mrdohertylhs)

Now Mr Doherty and other proponents of Twitter at the school may well have faced all the challenges that other educators have faced and/or are currently negotiating their way through;
I've had a lot of people come to me asking for my advice about developing their social media presence since TES Scotland mentioned me in their article on Friday. Want my advice on this... Here it is summed up in one word (Now there's a first for me!):

At least that's what educators would call what I am about to suggest if social media was an exam that students sat.

Send a Tweet out to Mr Doherty and Mr Meikle (@MrMeikle) and ask what they did.

Why would anyone want my advice when these guys have achieved something that I had tried to achieve but could not?

Furthermore, if people want to see Scotland become a nation of innovation in education technology, in my opinion, Larbert High School and Falkirk Council is where it's at!

I would like to highlight that this has less to do with Twitter/social media and more to do with the fact that this school have managed to get traction with an idea across the whole school! Guys you have my utmost respect! (For whatever that's worth. Lol)

While I would recommend people speak to these guys regarding social media before coming to me... there are a few ideas I have which I think could help with schools/Local authorities regardless of what stage they are at with this...I may even have a few ideas that could help Larbert High develop things further.

I look forward to exploring the possibilities with everyone that has got in touch with me so far, and would welcome new enquiries from other schools and local authorities.

Is it Switched on Like Malcolm Wilson Is?
As with Larbert High, if any local authority was looking to replicate Falkrik's success in their region, I would suggest that you beat a path to Malcolm Wilson's and Stuart Lennie's door... or to save on time and travel costs you could just Tweet out to them (@claganach &@IsItSwitchedOn... Love that account name!)

I thought that I was in for a treat early in my research when I was looking for Scottish Schools on Twitter and received this reply from Malcolm;

Malcolm's post is inspired! The minute I saw it I realised that a lot of hard work has gone into this. If any local authority is looking to replicate the kind of roll out with Social Media that Malcolm and his team have done, you could do a lot worse than replicating this article and listing the schools within the LA who are on Twitter.

Collaboration
It is through curating and sharing information that we uncovered the extent of the differences in terms of the number of accounts and number of followers in Scottish education.

It is through the work of a handful of individuals driving an idea forward that has helped a local authority dominate this medium, with one school being particularly open to the medium and adept at it.

Tweet out to Malcolm Wilson, Larbert High and the other schools who are doing well with this and learn from them.

I know that's what I'll be doing! Malcolm, Stuart, Mr Doherty, Mr Meikle... Coffee? If so when and where?
Posted by William Jenkins at 06:09