After finally catching up with educator and master sales person Nikki Robertson and a tweet by Trinket with some impressive stats, this post considers the furture of EdTech sales.

I finally caught up with Nikki Robertson on Skype yesterday and it was a conversation that was worth the wait! When I compared my experiences with sales and researching the roll out of technology with Nikki's advocacy work for companies who produced tools that are fit for purpose in education, our ideas seemed to be in sync.

"When an engineer learns how to sell, the engineer-salesman is a higher performing creature than an engineer plus a salesman together... that's not to say that just by giving an engineer a briefcase, you can make him a salesman"

So what happens in EdTech when we have these engineer-sales people work with early partners to achieve product market fit... Then hand the project over to educator-sales people/advocates to discuss the benefits of the product to their peers?

Flipping the Classroom... and the Sales Model
I already know that an educator like Nikki would out strip me on the sales floor if we were tasked with getting traction with the same product, educators are not just flipping the classroom... They are flipping the traditional sales model too.

Nikki told me about Flip Grid which, according to the organisation's website "boosts community and collaboration in classrooms, corporation and at conferences around the world" and was "100% designed and developed at The University of Minnesota LT Media Lab" and since it's launch in late 2012, over 2.5 million videos have been recorded, liked and shared. I wonder how many sales people they have? But I won't be surprised if the answer is 0!

Small Trinket... But a Big Deal!
After my Skype conversation with Nikki I notice a Tweet by one of those other masters of EdTech roll out, Trinket. I had no idea that they had achieved global domination. Check these stats out; 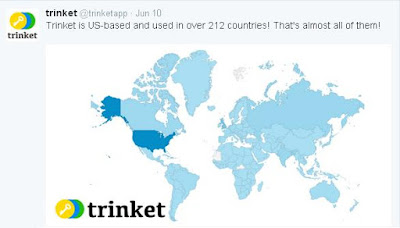 Being totally fascinated with the roll out process of EdTech, and given my exploration of more effective and efficient ways of educators adopting technology, I had to get in touch to find out what the model was!!

Culture... Vision, Experience and Humility
The first observation might be, "Oh this is free, that it explains it! It's easy to roll out if the service is free!" But this isn't it, there are plenty of EdTech products and services that are free and/or have freemium models that don't get this kind of traction.

Vision: The first thing on CEO, Elliott Hauser's, Linkedin page is that his vision is "to have code in every classroom." This suggests that this isn't about IPO's or flipping the company, it's about flipping the classroom... but with educators at the centre of the disruption.

Experience: When I wrote to Elliott to ask him about how he has rolled out to 212 countries within a year with only 3 members of staff, he felt the exerience of the team was an important aspect;

"Our team is more experienced than most. Ben and Brian worked together at WebAssign, which has over 200 employees. Brian was CTO there. And, of course, I taught Python at the University of North Carolina. Our combined backgrounds have helped us build the right product in the right way so it can really make an impact in the classroom"

Humility: While I am intregued by the comment about "Building the right product in the right way" and want to know more about this, Elliott follows this statement up with,

What?! Even if this is only one educator in each country, whether it's a free or fee service... I'm sure there are some EdTech startups who would be delighted to have 200 customers in the first year!

So to say, "We got lucky because the timing was right," is a frustratingly humble statement for me to hear as an explanation.

I wanted to know more about the specifics than this, although I could guess the broad strokes because they are recurring too often, and Elliott took the guess work out of it by sharing this post with more detail about how the company views various stakeholders like users and competitors in his post about being in the front line of entrprenurship.

The vision, collaborating with the right early partners, product market fit and core values/culture matters. How else can you explain Trinket's experiences when venture capitalists and investors Rethink EdTech as Dealflow Declines, education doesn't seem to have moved too slow for Trinket.

Flip Grid and Trinket may be the exception to the rule at the moment, but others will follow this model. What are the implications and potential solutions for sales people? Or what about the value of educators and the impact thier word of mouth referrals have on the company's ROI and sales efforts? I'll leave those ponderings for another day.
Posted by William Jenkins at 16:51