Margaret Curran... And the Politics of Social Media

I have been intrigued with the Scottish Labour MSP, Margaret Curran's attitude towards social media this week, both the nature of, and her handling of, the complaints she has about online abuse that is targeted towards politicians.

Here's an article detailing the nature of her complaint and how she is dealing with it:
Margaret Curran Lays Down the Law to Social Media Trolls

I find this a curious way to deal with the situation, my curiosity here is more than a passing interest as;

1) Any influence and all of the fantastic connections that I've made has been through the weird and wonderful world of 140 characters and getting to grips with all things "social".

2) I realise the importance of digital citizenship and how social media can improve student job prospects... or completely wreck their future, depending on the content!

3) The inaugural Horizon Europe Schools Report highlights that the growth of Social Media in education will continue and will be ubiquitous within the next 1-2 years.(These reports have been extremely accurate in the US with regard to the uptake and timescales for the adoption of new ideas).

In the US they have "Connected Educators Month" to facilitate the use of social media by educators, what provision is there in Scotland or the UK from policy makers?

For all of these reasons I am doing what I can to promote good digital citizenship and encourage the kind of innovative uses for social media that I see "Connected Educators" in the US employ to good effect.

I have to admit that I would have found Ms Curran's attitude and perspective baffiling if they were the actions of a normal person, but being the actions of the "political class", they actually don't surprise me at all.

In an attempt to explore this reaction I suppose the first question to ask here is;

"Is this kind of abuse confined to politicians?"

The obvious answer is OF COURSE NOT! Every community has their fair share of idiots who either don't think before they speak/Tweet/blog... Equally there will be individuals and groups who go out of their way to intentionally wind people up.

"Thank you to all of the idiots out there that I had to deal with. I learned a lot from you and I share this book with the hope that, when you bother the next person, he or she will be ready for you" Patrick O'Keefe Managing Online Forums
"Your worst customers are your greatest gift. They want things to be better" David De Wald.

I have just joined this weeks' #Cmgrhangout on the topic of "Diplomatic Community Management" and could not help but compare Ms Curran's course of action with the advice of the panel... And all I can say is "Chalk and Cheese!"


I learn so much from this group and would strongly recommend that others check it out too.
While the abuse is not pleasant or acceptable, I'm sure it's no worse that one week of abuse that female gamer FemFreq gets and it may be highly unlikely that any MPs will take their own life because of the nature of the abuse they receive, as Amanda Todd did.
Let me be clear that I do not condone abuse of any kind online or offline, although a good debater might be able to successfully argue that of all the people who are open to scrutiny on social media then surely it's our public figures? After all it's their job to listen to "the people"... They certainly tell us often enough that they are listening!

Personally I think that people being questioned about any failings in carrying out their work is better than a lot of other examples of abuse that takes place online! But then again I'm not a big fan of the political class.

Ironically I try to avoid talking about politics on social media because I can tend to get so angry at the level of ineptitude and this can and sometimes does adversely affect my own digital footprint.

Political Wrangling on Social Media
The next question I would explore with this story is: Why is this topical? Why raise this issue at the moment?
Obviously we have the General Election coming up so the desire for our dear megalomaniac MPs (Not my words but Labour MP Diane Abbots on This Week) yearning to be popular and well loved reaches pitch fever... After all there are lavish expense accounts and family members future employment on the line in this popularity contest!
But social media, elections and politicians desire to be loved for breaking their manifesto pledges have been around long before #GE2015, so why have a big digital tantrum on this occasion?

Previously all parties have probably had the same level of abuse and the audience was perhaps confined mainly with card carrying party members... one group of the party faithful slinging mud at the other with few undecides bothering to take notice, so is unlikely to affect the overall outcome.

However, the Scottish independence referendum has changed this. Today we have a lot more voices joining in the chatter, it's louder and from more diverse groups... And conditions like this can change popular opinion, as we saw last September, dancing guy demonstrates how and why this happens

Sour Gripes?
The Independence Referendum has more people engaged in politics, but not every party is getting the same amount of "abuse" and bad press... In fact the "losers" of the referendum sure do look like winners on Social Media... Didn't I tell you so on this very blog on the day of the indyref result?

So to what extent is Ms Curran's gripes a case of "sour grapes" because the SNP is not getting the same treatment? It is my opinion that the SNP is doing better than labour on social media because;

1) They have a better brand than Labour. Labour, along with all the other main parties who are amongst the most hated brands in the UK according to a recent poll. I believe the SNP's popularity is due in no small part because of

2) Their commitment to community management and the phenomenal out reach work with various groups and sectors during the referendum.

...If your Brand Sucks Offline
So what do you do if you're up against it on social media?

If you were a politician having a hard time engaging people on social media, what do you do? If you wanted to be predictable you might opt for a "woe is me" attitude and do what politicians excel at... and blame someone else! After all, there's no possible way that the politician and/or the party is doing something wrong and/or could be doing better, is there?

It couldn't possibly be due to the fact that their previous actions have left you with a poor brand, or poor use of the medium (ie Ignoring the people and the problem), could it? 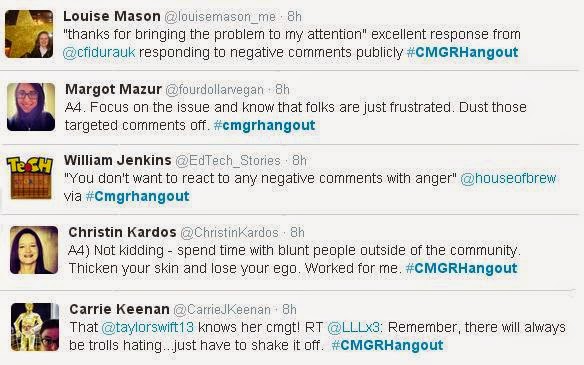 ...And if there is an issue with the brand? Scott Stratten has a great observation regarding this in one of his "Unmarketing" videos

Is this Post Abusive? Some Advice...
Just in case the content above constitutes as "Abuse" in the world of politics please allow me to offer some suggestions;

What if... instead of making it all about you and saying how aggressive you are going to be with abuse, the message was changed to;
"The abuse that many people get on social media is concerning, what can we do to educate people? After all, abuse like this affects the troll as well as the target"

2) Try engaging with "The people"
The advice of David De Wald is that the people who are tweeting care enough about the brand enough to comment on it," this may be slightly different for politics as they care about scoring a point against the opposition or care about the issue being discussed.
However engaging the abusers can and does win over new fans... It's certainly worked for James Blunt and O2 when they encountered bad press on social media.

Do Politicians Engage on Social media?
But engagement is something that I would question if any of the parties do on social media? All I see is either one way corporate, party political broadcast Tweets or MPs only chat with friends and colleagues where they chat amongst themselves and preach to the choir.

For me this demonstrates the true extent of their desire to "Listen to the public," never has it been easier to engage and listen to "the public." I have only ever had one Tweet whereI have @mentioned an MP and had a reply... and I've mentioned a few MPs in, what I hope has been, a non-abusive manner.

I would welcome any politician to engage with me and here are 2 suggestions with reasons to engage;

1) I am working on some ideas that will help improve the digital citizenship of both educators and students and I am happy to discuss these ideas and plans with you.

I would be surprised to get any kind of reply at all... That is maybe until these projects become a success and MPs look for photo opportunities in an attempt to take credit for supporting a successful initiative. Is it abuse if it's true?

2) At the moment I will be voting for the SNP at the general election, but am open to any "civil and engaged" debates with anyone regarding why I should change my mind...

However, in today's age of the "halves and halve nots," where austerity does not apply to the privileged with their cosy "Old Boy" Westminster relationships that the media and banks have... With the rise of UKIP and the former Scottish Labour leader complaining that the Westminster elite pull the strings of the Scottish branch (along with the Blair/Brown "Things can only get better" mantra) ...you'll have some way to go to change my mind!
What got me interested in the whole "Yes campaign" was the  SNP's ability to bring people from very diverse backgrounds together in the way Jane Jacobs advocates... So you may have to come up with a a persuasive argument, I can't envisage any other party achieving this.

But I'm no good at constructing an argument so any politician who is paid for their debating skills should have a good shot if they engage with me, right?
Posted by William Jenkins at 11:14