SuperSalmond Episode 5: Helping A Competitor... Advice for Other Parties

So far in this series we've looked at reaching out to kids, Science fiction fans and considered the startup community through Stratacus' advice for branding an independent Scotland.

In our most recent post we encouraged the people of Scotland to dream big and be the best in the world. We also detailed why, based on Tech sales, the old style politics might just want to pack up and leave. Today we're going to reach to this group who desperately needs our help... and some hope. Our competition: Other political parties.

"Sad Strange Little Men and they have our pity"

Good #YesAlliance Digital Citizen's shouldn't get angry with their competitors and/or make them feel like they want to flush your head down the toilet. We should collaborate with everyone, even our competitors, and help them (in our case this would be help them to pack. Lol. No just kidding, well actually I'm not but there's a nicer way of putting it).

Hey Misters, apologies forgot what we stand for, and are "The Defenders of Hope" I had no right to say you were sad or strange... although you don't seem very happy! And your beheviour towards Scotland with its energized proactive Digital Citizens does seem a little strange? Oh and if ever there was a Hopeless situation...(Note to self: Stop it! Play Nice!)

Wager: Dull and Incompetent
Tell you what, how about a friendly wager? You go speak to your expensive consultants to see how to deal with Brave Many's #SuperSalmond design and this "Defender of Hope" stuff and, if the strategy is a good one.... If its as good as your Better Together campaign, we'll say that you win. If not we do? What do you say?

We can bet a sticky bun on it... Or how about one of those Cornish Pasties that we understand Minsters of the West are partial to?

Superman Making a Difference... SuperSalmond Creating a Legend
Alex Salmond has already spoken to Superman and he told us that he had beat some baddies in real life: How Superman Defeated the Klu Klux Klan. Superman asked the #YesAlliance
"What would happen if we took a goodie from real life to and made him into a cartoon superhero?"

As things stand when the Minsters of the West encounter SuperSalmond it's as his alter ego The First Minister of Scotland. You like arguing with him and belittling him and his effortdown in your house. Your common house which is full of strange little people who just argue amongst yourself all day long.


Hope in the Face of Retirement When Mr Salmond retires you'll be glad he's no longer here to bother you. But, IF all this Superhero "Silliness" takes off, how are you going to argue with or against Super Salmond, without trying to crush some peoples hopes.

Therefore, it is our hope that you will need to change your leadership style. Leadership where people collaborate instead of shouting and arguing.

Leadership based on results... on what you have actually done, not based on soundbites that you never get round to fixing.If you do decide to start arguing and fighting with the Scots, you will be having an almighty battle as you will be taking on "The Defender of Hope." Might even have a SuperSalmond comic! 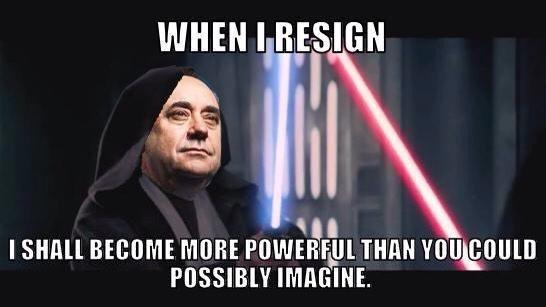 We've Tweeted out to The Beno, the Herald, Mecha Man, Horribe Histories, Comic Con and a regular SuperGran, we'll be asking the kids what they think about the idea too. If they like we could explore and and all of these areas;

Leadership Super Powers
We are preserving and adding to the work of the kind of leadership that makes sure they take other people with them.

We have been breathing breath life into adding to and celebrating Brave Many's #SuperSalmond design: We hope that we have added to "The Legend" with ideas that will be difficult to shake out of the minds of the people who read this. ie comparing Salmond with "The Steve Jobs of politics" and that he has created an "Entrepreneurial and Start up Politics".(See Welcome to Scotland and Episode 3: Start Up Scotland)

Doing Good while Having Fun... And Just Being Silly! (But Annoyingly Effective)
If Alex Salmond, the #YesAllience like this whole "Super Salmond idea" and they ran with it, it could have been problematic if we were an independent country. However, we're not, we're a part of the British Empire and every kid knows that you need a bit of silliness and rebelliousness when you're up against an Empire... Even the grown ups say so in "David and Goliath:Underdogs, Misfits, and the Art of Battling Giants"

SuperSalmond in Education
Education does not need any misfits or underdogs in the class, there are enough of those already. Education and kids in deprived areas need a battling giant and we feel some SuperSalmond ideas could be the solution. We detail some of this in Episode 1 and RockStar Educators (With more to follow)

Waiting for Superman follow a handful of promising kids through a system that inhibits, rather than encourages, academic growth. This film takes an exhaustive review of public education, surveying "drop out factories" and "academic sinkholes," methodically dissecting the system and its seemingly intractable problems .

We're going to see if we can do good while having fun in education, and see if Super Salmond can help with this.

Hail the Conquering King? Or There's a Hero in All of Us
"Who'd want a monarchy, when they "conquer" and "rule." But Superheroes... They defend people! Especially those who can't defend themselves. This has the added advantage of being the antithesis for Minsters of the West, home of the elite and friend of big business.

"You'll never guess who [Little boy Henry] wants to be. Spider-Man. [Because] He knows a hero when he sees one. Too few characters out there, flying around like that...saving old girls like me. And Lord knows, kids like Henry need a hero. Courageous, self-sacrificing people...setting examples for all of us.

Everybody loves a hero. People line up for them. Cheer them. Scream their names. And years later, they'll tell how they stood in the rain for hours....just to get a glimpse of the one...who taught them to hold on a second longer.

I believe there's a hero in all of us...that keeps us honest...gives us strength...makes us noble...and finally allows us to die with pride. Even though sometimes we have to be steady...and give up the thing we want the most. Even our dreams. And besides the post this morning was just a story! But if you do want to take it seriously: Here's the rational"

Don't know about anyone else but this sounds a lot like the #YesAlliance so far and what Scots aspire to... There might be something in all this silliness and Super Hero fun.

Super Hero Leadership
In the previous SuperSalmond Episode We highlighted some changes may benefit others with leadership roles;

"Get rid of the "Takers" and "Fakers" in leadership roles and replace them with Adam Grant's "Givers" and Dave Logans "Stage 5" teams... the ones that take other people with them, and create value for all, not just themselves"

It would be great to think that this Superhero idea could force politicans hands. I stress I am non-partizan, and am happy to help anyone out. However, the higher the bar can be set, the better. A retiring politician who the people like is one thing to take on, but what about when he leaves? What about a legacy that will keep people on their toes? Superhero status... I love it Brave Many! Well done!

What if this image and brand takes off? I'll tell you what... OUCH! You might just want to consider a new referendum... just to get rid of this political hot potato! I don't know if Brave Many is aware of how significant this is, which is why I've been happy to help develop the narrative with these posts.

Now, here's how we hope this SuperSalmond series proves to be a real challenge to the "Takers" and "Fakers". I hope that those who deserve to, find some of these concepts difficult to remove from people's minds once the ideas are out there... I have attempted to write it some concepts that will resonate and "stick" so.even the political spin will struggle, But I am no spin doctor so have no idea if these ideas will have any impact. But here are some examples that we were going for,

Comment in post: "They're the Woolworths of Politics"
What people will think when politcians talk "I'm listening to a dinosaur: You are the stuffy the old guard"

Comment in post: Startup Politics
What people see when politicians talk: Stop talking and show me the money! Don't tell me what you are GOING to do, show me what you have done!

Comment in post: Adoption cycle and customer profile
What people will think when politicians talk: SuperSalmond, YesAlliance, knows my fears and can relate to me about them. All other parties think about are along party members and class lines.

Comment in post: #BetterTogether or Divorce
What people will think when politicians talk: If you argue or try to belittle Super Salmond the noise for wanting another referendum will become Exceedingly Loud! You may want to think about playing nice. Collaborative politics.Maybe not be what politicians want or what are used to but it's not about you.

You could always fight fire with fire and create your own Super Hero, but who? And for what? What would they stand for and have achieved? Maybe Iron Man's compatriot, The Iron Lady? That WOULD go down well in Scotland!

If it looks like these posts are "Out to get" anyone, this is untrue. If any politicians feel this way, maybe it's because this is their leadership style. Please also allow me to remind any MPs listening in that every party has had emails from me. I have met with people from every party, but many of these ideas in my blog have gone ignored..

Furthermore, if I wasn't interested in helping... why would I tell you what people will think and provide advice for you in each post. HOWEVER, even offering advice may be pointless... if people don't care about anyone apart from themselves or lack integrity. If the culture is not right then nothing you do will work. I guarantee it #in-the-thick-of-it.

As an example, we are seeing aspects of this in the Independence camp as there is not the same culture and sense of unity, purpose or humour when you compare the #VoteYes Camp and campaign Vs post election activities. Culture Matters...More than ANYTHING else!! 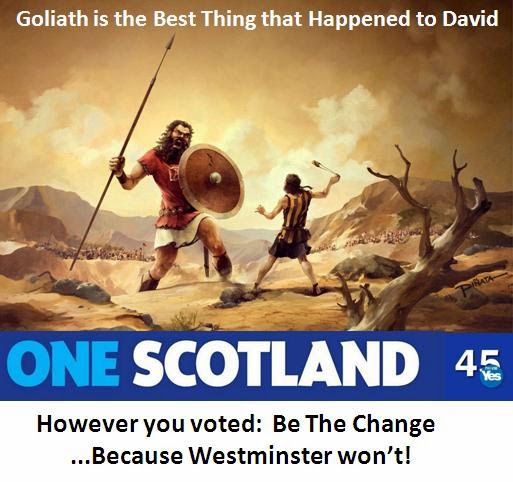 Posted by William Jenkins at 01:51