A Call for #The45plus to Reflect

There is a lot of discussion on #The45plus hashtag about what a group of thousands of people who are keen to affect change should be doing to make a difference. I have some ideas that I believe has the potential to make an impact. Before sharing these ideas, after 3 days of #The45plus being formed I would welcome and encourage the group to reflect on who they are and what we hope to achieve.

I am only 1 of 1.6 million
I am one of the 1.6 million. I am not politically minded. I expected to vote on the referendum and think no more about it. But this is my 6th post on politics. Three posts saw me become an advocate for #VoteYes and thinking of as many ways as I could to "Sell Yes" to my education contacts. Three posts are about how significant #The45Plus opportunity is.

I am not political. I am Nervous
Sharing these posts make me a little nervous. I'm not used to dealing with politically motivated people. I worry that the ideas here get accused of being Maxist, fascist, utopian, totalitarian or any number of other ideologies (many of which I have to Google. Lol).

Then there is the fact that I feel a little out of place. Not because anyone makes me feel uncomfortable in any of #The45Plus discussions... but because I have little interest in "taking down this party or that" Or being critical of people who voted no, or punishing companies who made a mistake of airing their views about the referendum.

I am Sorry
I am sorry if that offends any particular individuals or groups. We are #The45plus, We are similar in that we have a shared vision of what is possible for Scotland and we are keen to see change.

That may be where any similarities begin and end. we may well have 1.6million ideas of how and why that change can happen. I want to help. I'm trying to help. But my views will not suit all... Therefore, apologies if this (and other) posts are not helpful.


I am Keen to Help
I have had some experience with Building Communities and would like to offer the benefit of this experience. For example;

What is a Community?
Community is a group of people with unique shared values behaviours and artifacts 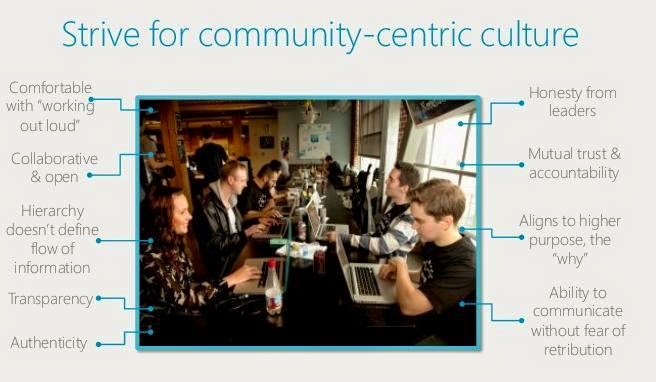 I am relatively new to community management but I do have experience of developing and/or supporting 4-5 communities now. Nothing as big as this, but I am happy to help.

I am Disappointed
Already we have made the mainstream press which was great, it's also not so great. It is great that we are getting some press attention; But it is not so great that the media is picking up on the minority of hateful messages.

The Yes Scotland and VoteYes camp criticised Better Together and No Thanks campaign messages and supporters for their scarmongering and negativity. So what do we do when we find a voice and gain a little bit of influence? We throw scorn on the companies and seek revenge of those who threatened to leave an independent Scotland.

This is despite knowing that Westminster control the media and the damage they caused when we were 100% positve, they'll have a field day with this! And what will #The45Plus do? Blame media bias? I'm sorry my #The45Pluse friends, I'm with the media on this one... We're doing what I give my kids in big trouble for

Just in case you don't like the parental advice of this random guy, how about Lincoln's  advice?

“Don’t criticize them (Confederates), they are just what we would be under similar circumstances” (Lincoln)

How many of us haven't covered for a mate whether with a wee white lie or in some more significant way? Maybe these CEOs were more concerned about helping to make a friends job easier...rather than thinking through the repercussions or consequences. I detest the old boys network as much as anyone, but don't know that this is the best way course of action... Nor do I think this is in the #VoteYes spirit.

Same Idea... Different Aim
It would take just a slight tweak to turn this into the most beautiful thing. We've see what we can do with the Herald. Instead of using this influence to take some kind of "VoteYes Strikes Back" action, use it to say "#the45 please spend £10 per month more on local companies to keep the money in the local economy"

What impact would this have? A US high school basketball team did this exact thing as the high street was becoming run down due to out of town malls. These students asked friends and family to spend $10 per month in town. This campaign smashed all expectations and generated something like $7 million and "Unslumed" the high street. #The45Plus 1.6mil £10 per month = £16 million per month! Small gesture. Big impact.

I am Collaborative
I am not a hateful person. I have nothing but understanding for why people voted "NoThanks," I've tried to explain why the Better Together's view is completely understandable in previous posts. If the #NoThanks vote defeated the "let's just do it and never mind the risks" perspective of the "VoteYes" crowd 300 years ago during discussions about the Derian Venture, the formation of The Union might have been prevented entirely!
I am Not Party Politics
I am not motivated along party political lines. I do not believe that a hard working MSP who makes a difference to people lives should automatically be replaced by a mediocre MSP simply because the hard working person wears the wrong colour of badge. Holyrood looks like a fantastically collaborative environment, one with lots of cross party collaboration.

For any #The45 educators out there I hear this in education too. Tech enthusiasts may say "If you don't get behind technology then you're a dinosaur." However, give any parent the choice of;

1) A mediocre Teacher with all the devices, gadgets and gizmos in the classroom, or
2) A master craftsman of an educator and a bare room

Which class would they choose for their kids?

Before the referendum I couldn't name the leaders of Scottish Labour, Conservatives or Lib Dems, never mind my local MP/MSP etc, so please don't ask me to wish ill on someone when I know nothing about them.

Equally, while I may not have caught their name or party as it flashed up on the screen during the Referendum discussions, I know that I liked what I heard. I hope #The45 can forgive me if I suffer from party political blindness... After all it's what made #Voteyes great.

I am Not Westminster... Are you?
Westminster appears to be a hateful place where grudges are held and an "I'm not working with you because you're the opposition" dictates decisions. If  members of #The45Plus say;


"Let's get rid of Labour, lets make the Tories pay"

Whose behaviour are we mirroring? The behaviour of Holyrood that has brought us together? Or the very same practices of the group of people we are angriest with? If it's an argument with an MSP you're after, you can still have that... but in a way that's more constructive, based on ideas... not political ideologies

I am Inspired
I've spent a good deal of time on #The45 and #The45Plus hashtags over the last few days I have been inspired by,  and despaired of,  the Tweets in equal measure. I've tried to promote the positve and ignore the negatives. This is not to say that I am criticising any negative Tweets or perspectives... Every one of the 1.6million is entitled to their opinions on this forum. Also #The45plus are entitled to carry out any and all of the plans that I question in this post. All I've suggested is that we take a little time to reflect on what you want this to look like.

Personally I am one of the 1.6 million who loved the positivity of #VoteYes. I was SO INSPIRED today when I saw that the proactive attitude and humour from #VoteYes had made it's way over to #The45plus. The group used the power of community for the forces of good by creating a pop up food bank in Glasgow.

I don't think I need to explain "The Return of the Humour," do I?

I am Engaged...So Are MSPs
The leadership of Yes Scotland has been missing from #The45Plus and I wonder if this is for one of 3 reasons;

1) This happened on the first weekend after a long, exhausting campaign... where the result may have been seen as a disappointment. So perhaps @YesScotland have been taking a break

2) Politicians perhaps waited to see if this was going to be quite an angry and/or militant political community, one where MSPs engaging with members would have led to nothing more than an argument

3) They were not sure if they were invited. They may have wondered "Is this a grassroots thing where the involvement of politicians would be a social media faux pax?"

We are starting to see MSPs post on #The45plus hashtag. How are we going to respond to this? Are we going to slam the door on a potentially new and exciting way of engagement with MSPs? Are we going to make them regret Tweeting on the hashtag by "Giving them dogs abuse?"

Twitter has such huge potential to connect people but, it can also be divisive and polarise groups.

It Turns out that Twitter is EVEN more politically polarised than you thought
I think that a weekly #The45PlusChat where we discuss different topics with the relevant MSPs attending to engage with, to listen, to understand "The People" and maybe even to co-create and crowdsource solutions. This could be a game changer in Scottish politics for various reasons.

What would be needed to do to achieve this? The US Education Secretary joined an EdChat last year. This was a big decision for all stakeholders: The policy maker, the moderators and educators... how did they set the culture and prevent any negativity? With this simple and insightful blog post:

Politicians and some thoughts on Digital Citizenship

One of #YesScotland's campaign messages was "Bairns Not Bombs." The referendum being a national conversation and allowing 16 year olds to vote has engaged our youngsters, they may be on #The45Plus: Bairns Not Bombs...Let's try not to drop the F bomb

I am one of the 1.6 million... I am Here to Help
Everyone of the last 6 #indyref #VoteYes #The45Plus posts has been new territory for me.

My blog is getting a lot of views and I am getting a lot of followers and ReTweets from #The45plus, but am not getting a lot of direct feedback. I am sharing the same links over and over, which feels like the kind of "Look at me, look at me" self promotion that I dislike about Social Media... But I do this because I feel the ideas have merit.

If I'm wrong, please feel free to tell me... I've got other things I could be doing if this isn't helpful. Otherwise I'll continue with these posts and hope that at least a few other individuals and groups of the 1.6 million agree. Be the change you want to see.
Posted by William Jenkins at 22:14