Where in #FE is Everyone?

It was Digital Learning Day in the US yesterday and the organisers were encouraging educators to take a pledge to;

"Give every child the opportunity to learn in a robust digital environment everyday, with the goal of success in college and a career. We urge you to make a difference with digital learning in America's schools and take the pledge to support the effective use of technology to improve education for all students"

It is a couple of years since I wrote my Twitter in Further Education report and I am doing some research on #EdChats and conferences at the moment, so decided to download all the Tweets from all the FE hashtags that I could find.

Part of the reason for this is because I have seen, with more and more frequency, people in FE asking for lists of FE people on Twitter, but were finding it tricky to find colleagues... even though its such a pervasive medium now.

I thought this was a little strange as I had sourced over 2,000 FE related accounts, so decided to explore... and found that the world of Further Education sure does seem to be a little fragmented on Twitter.

I pulled together as many FE Twitter accounts as I could find when I was writing my Twitter in FE report and put the following lists together;
I have found that compiling these lists was a good use of time as I can check at a glance what is happening each day in the world of FE.

#EdChats
I have continued to explore the world of Twitter in Education over the last 12 months including the use of hashtags and #EdChats. 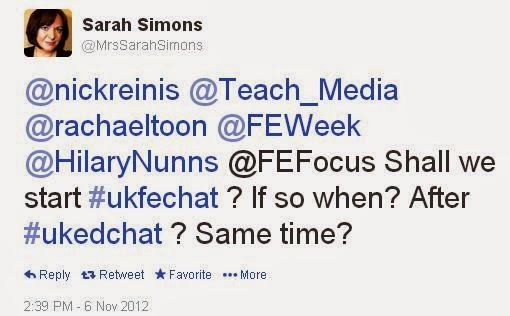 In January 2013 I noticed that @MrsSarahSimons was trying to establish #ukfechat. As I was "between projects" I offered to use my contacts and sales experience to see if I could help "drum up an FE crowd" ...to find the early adopters to get the session established.

It's a year since I became involved with #ukfechat and was interested to see the extent to which this has been established. I wonder if you can spot the same thing that I did... Here are some stats; 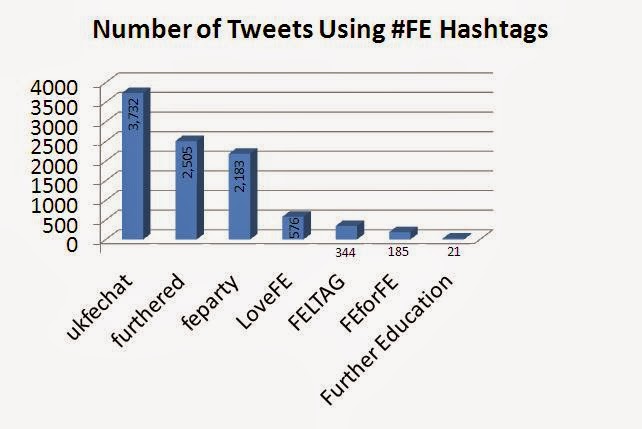 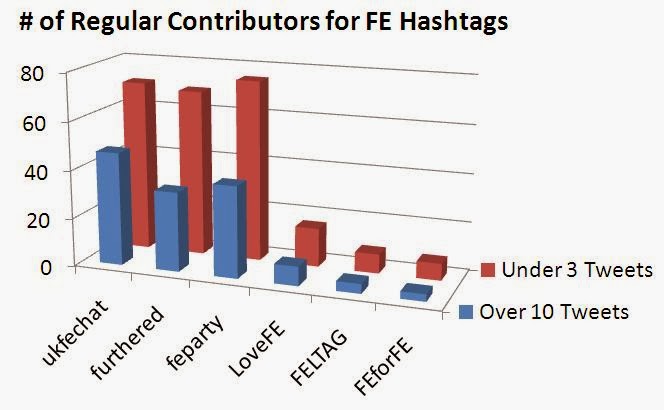 Top Contributors
The most regular contributors for each hashtag include (Number of Tweets in blue text); 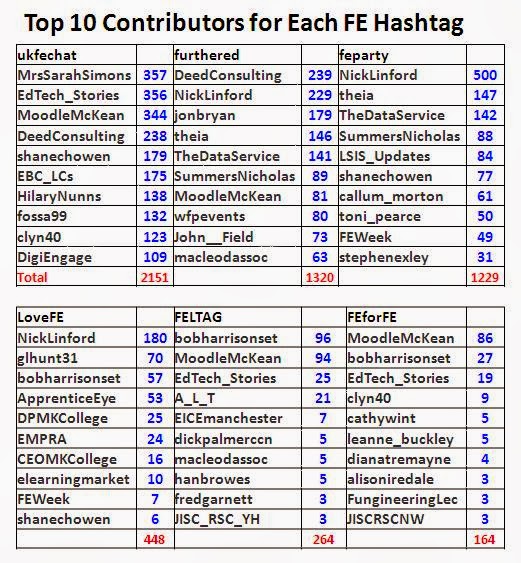 UK Vs US Participation
People who follow my account may have noticed (and may even wonder about), my participation in US EdChats when my focus is on UK Further Education. There are 2 reasons for this;

1) I am always on the look out for new ideas that might be useful to FE, and
2) The use of Twitter within the FE Community still appears to be in the early stages

My exploration of the world of Twitter in Education over the last 12 months has given me lots of new ideas. In the world of #EdChats and Hashtags there appears to be a defacto hashtag in just about every area of Education, so people can find out what’s happening with a quick search of the hashtag.

This includes different areas of education whether by age rage, subject, use of teaching methods/technology or location. In the UK this includes #ukedchat #SLTChat #EdChatie and #Niedchat.

I recall an article doing the rounds in the US last year called "Tweet Thine Enemy" is the FE equivalent "Avoid that Hashtag?"

I like an #FEParty with an Atmosphere
I was never quite sure of what the #FEparty hashtag meant, whether it was FE Weeks dedicated hashtag or if it was an hashtag that was like @Stu_Voice & #Stuvoice in the US. Looking at this data has helped answer this question for me.

The crazy thing is that #ukfechat have looked to include students in their discussions and would have been extremely interested in hearing these students' views and opinions on their education.

Networkers
On a similar note, something that has been particularly surprising is, given how small a community FE is (and how few people are on Twitter) is that people are not using more than 1 or 2 of these hashtags; 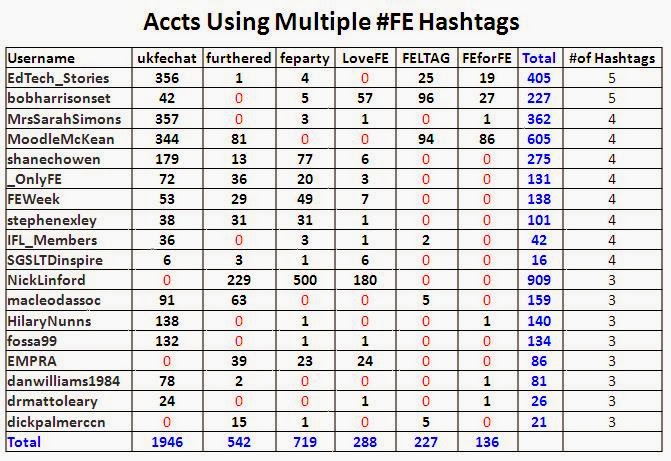 Sector Breakdown
Not only there only appear to be a very small number of people getting involved with any of these Hashtag discussions (133 Accounts using a hashtag 10+ times; 247 using a hashtag 3 times or less), but this is compounded when you look at the type of accounts using them, as there appears to only be 68 people based at an FE College;

Posted by William Jenkins at 06:31