What's the Difference Between the Cinderella of Edu & Stanford?

There is a term in FE myself and many others have a dislike of, which is any mention of Further Education being the "Cinderella of Education" - a reference to the relationship and comparisons between college and university.

I wrote about some of the reasons for this in my "College Brand Identity - Just Do It" post which I think was a reasonable attempt at explaining why this happens, but would like to add to this post, as I feel better able to articulate one of the significant reasons for this.

Being part of a Community... An Optimally Distinctive One
People identify with others when they are part of a common community. But not all individuals or groups are equally likely to attract this type of identification. When looking for commonalities with others we identify more with "uncommon commonalities" which psycologist Marilynn Brewer has developed;

How do we resolve this conflict? The solution is to be the same and different at the same time. Brewer calls it the principle of Optimal Distinctiveness: we look for ways to fit in and stand out. A popular way to achieve optimal distinctiveness is to join a unique group.

Being part of a group with shared interests, values, skills, characteristics, or experiences gives us a sense of uniqueness. Studies show that people identify more strongly with individuals and groups that share unique similarities. The more rare the group, value, interest, skill, or experience is, the more likely it is to facilitate a bond... people are happier in groups that provide optimal distinctiveness, giving a sense of inclusion and uniqueness. These are the groups in which we take the most pride, and feel the most cohesive and valued."

Community Spirit... Didn't the Team do Well?
In my culture report and "College Brand Identity" post I highlight how sports teams excel at bringing diverse groups together using team colours, songs, mascots etc to develop connection and belonging. There is also the fact that the traditions that Red Brick/Ivy League universities resembles what sports clubs do. Stanford psychologist Cliff Nass observes;

“Workplace similarities within a group are neither clear nor obvious. Therefore you may need to consciously work on team identity by identifying and then highlighting a shared quality. A good example that is that of sport.

In a college football stadium, people in the stands are bound by only a single characteristic: the team they root for. Nonetheless, students and alumni feel perfectly comfortable screaming, “we are number one” or “we won” even though they had nothing to do with the teams success: they didn’t play, they didn’t coach, they probably didn’t know the players personally, and their individual contributions to cheering were insignificant"

Education: Stanford University
I got an email in December, which I got very excited about. I had applied to, and was accepted for, one of Stanford University's Innovation and Entrepreneurship Courses. This course costs quite a bit so may be a few months before I can afford it but, with an interest in Tech Startups, what do you think I did when I heard I was accepted?

I changed my online profiles to say that I would be doing a course at Stanford University of course! I will be extremely pleased when I complete this course and can say that I have a qualification from Stanford... How cool! I was so please when I heard my application was accepted. One of my initial thoughts was;

"Hopefully this course will add to my credentials when discussing tech and startups with FE". The next thing to cross my mind was, "What would happen if this was a similar course attended ran by an FE College, would it look as impressive to the FE sector?" I'm not all that sure that it would.

one of the reasons I say this is because I see so many people within and outside of Education making their way to Babson College, which is #1 for entrepreneurship for the last 20 years. On one hand its great that we are collaborating with excellent practitioners; on the other you can't help wonder why there is not a college with the same reputation for entrepreneurship in the UK that people flock to.

Optimally Distinctive Colleges
Not only are these top institutions hard to get into but they also differentiate themselves by focusing in niche areas -  Want a job with Fortune 500 company? Go to Harvard. Want to establish a Tech Startup? Go to MIT or Stanford. To develop a general Entrepreneurship idea, apply to Babson.

Of the UK colleges that do have a stronger "optimally distinctive identity" it may be because the college specialises in specific or unusual subjects and/or are harder to get into because they have a good reputation due to positive Ofsted results etc. Whatever the reason they are oversubscribed as a result of supply and demand, which is what appears to create "optimal distinctiveness"

I've heard a number of stories about colleges turning very few people away or hardly anyone being permanently excluded (which critics blame on colleges' need of funding). On one hand this has its problems with classroom management and behavioural issues; on the other hand its encouraging that FE is accommodating to our most vulnerable young people.

But these conditions can make creating "Optimal Distinctiveness" a bit more of a challenge... but not impossible;


To become a success at what they do KIPPSTERs have to shed part of their own identity because the cultural legacy they have been given does not match their circumstances – not when middle and upper class families are using weekends and summer vacations to push their children ahead. Their communities do not give them what they need. So what do they have to do? They give up their evenings and weekends and time with friends – all the elements of their old world – and replace them with KIPP

There are a number of advantages of creating this kind of culture, which can have significant implications for attracting new students, behavioural issues while at college as well as for career prospects.

FE in the Age of Uncertainty... and HE Saturation

I constantly see the great work that FE does and how it excels in comparison to other areas of education, including UTCs and modern apprenticeships. But, for some reason, the message is not getting through and more PR campaigns are needed to compete with this pervasive message that "Uni is the only route," as it appears to be so ingrained in our psyche.

This may once have been the case but not getting the FE message out there is having a detrimental impact on career progression - Jobless graduates with they studies a vocational course or the fact that this Ted Talk about "Career in the Age of the App" sounds more like a modern apprenticeship and FE education than other form of career progression.

I hope that our EdTech report highlights the extent that sales and marketing matters... to not find or invest in the right kind of PR campaigns will see people continuing to view HE as the only route to success and/or see FE market share be taken by new competitors - Like Starbucks or is your next teacher going to be an avatar? As Peter Sheahan highlights;

"Not only are the markets that we serve more diverse and more demanding in terms of choice, they are also increasing looking to intangible qualities to differentiate between one offering and another. The truth is most businesses are operating in oversupplied markets, where customers can choose between multiple products with the same functional value. In such markets, customers inevitably base the decision to buy one product over another on previously “superficial” features" (Sheahan, P 19)

I have read a number of case studies on this area (many of which as in my "Culture in FE" report) and would be happy to discuss this with anyone who would like to discuss this further.

...And, if all else fails "if you can't beat 'em join 'em!" We can at the very least roll with this Cinderella of Education image but with a slight re-brand

"Cinderella of Education? Sure we are... We're made up of a tough bunch, who are under-resourced... but we sure do come out fighting and never give up" 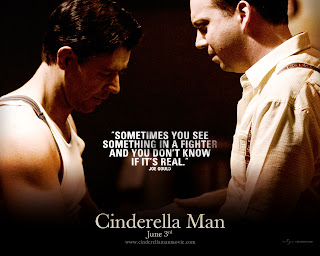 Posted by William Jenkins at 22:22