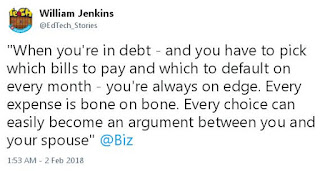 As I highlight in my #CEduAD Post in September 'Startups are messy... EdTech is tough... and social media is an interesting place at the moment.

Biz Stone's book was a real inspiration to me and came at a time when I REALLY needed it! Professionally things were going well for Biz when he was hired by Google but, personally, he'd taken a few risks to get noticed by Ev Williams and Google who had just acquired Blogger, and was in debt.

He bet on his 'future self' who was going to find a way to pay for everything. When he worked at Google, he lived in a bare flat as he and his partner could not afford furniture... His colleagues rallied round.

Like all my other books it's in storage and, unfortunately, are at risk.

I have written this post in the hope of securing the amount needed to get our possessions out of storage in the next few weeks. Please feel free to contribute to this Go FundMe Page... any and all assistance gratefully received during this challenging time 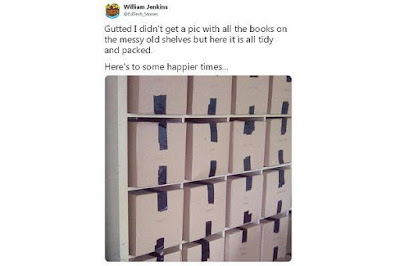 If high profile people like Alex Salmond can raise £100,000 in 24 hours and/or a Potato Salad Kickstarter can get $55,000... I hope that I might have built up enough goodwill with people in my PLN to be able to raise £700 needed within the next couple of weeks.

Over the last few years I have tried to see ‘where the puck is going to land’ in relation to EdTech sales.

When I mentioned in 2015 that cold calling was dead, MSPs told me that this was not the case as people loved the Scottish Accent. The MSP for Dumfermline highlighting that there were lots of opportunities with Sky at his constituency.

"Are you playing about with chatbots?" Don't be surprised to find that the answer is

"Yes, we have 8 chat bots running at the moment"

Fast forward again and Adapt or Die: How to Cope when Bots Take your Job highlights how 100,000 AT&T jobs could all go at once.

In Scotland there are some 4% of the Scottish workforce involved with contact centres, are many of those people and their families about to experience what we've gone through? I sure hope not! I would not wish our experience on anyone!!

In 2012 I saw that cold calling was on the way out and looked at what innovative companies like Microsoft, Google, Apple and Pokemon Go did to get traction in education.

They didn’t appear to be making the same sales calls as other education based companies… but did seem to put a lot of time and effort into establishing relationships with educators and putting ‘social proof’ to good use.

In 2014 I realised that the UK FE sector was not the best place to explore ideas that I’d been working on as I’d managed to get more done in 4 weeks with US educators when supporting the #SaveEdShelf campaign than I did in 12 months in FE.

(This was in spite of working with 50% of FE colleges and 100% repeat business over a 3 year period with some pre-austerity Every Child Matters and Healthy Colleges projects).

I’ve worked in a paid and unpaid capacity on projects that I have felt had value (and the right core values) since 2014.

A common topic of conversation is that the ideas that I get (usually as a result of ‘social listening’ and curating various data sets) from friends and people in my PLN is that the ideas are ahead of their time.
I’ve found the statement

“Being too early is as bad as being wrong”

To be very true! Except I’d have said that being too early is actually worse than being wrong! 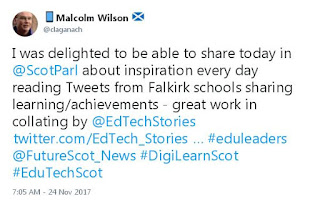 It is through research like this that has formed the basis for my involvement with the #DigCitSummit movement, anything I've done to get educators involved with the Skypeathon and Connected Educator Appreciation Day (#CEduAD).

I would like nothing more to finish this work and see it reach it’s full potential, which would be 100% in line with what I felt was possible in my very first blog post 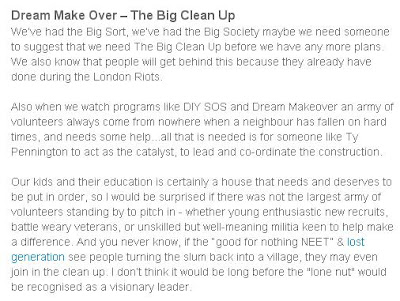 These ideas also happen to be in line with what Chris Van Der Kuyl advocated for in his #SLF15 keynote, as well as the way the Scottish Government say they want to empower educators.

However, like many find in the #EdTech space (Which most definitely does NOT need to be the case… In spite of austerity and all the school budget cuts), I’ve struggled a good deal.

In the last 12 months have been on the wrong end of a losing battle that I don’t think would be out of place in an Ayn Rand novel.

In August, due in part to non-payment of work that I carried out – as well as a good helping of 'optimism bias' and a dash of naivety – the only home my boys have known was repossessed and we joined many of the other UK families who are experiencing some pretty hard times.

I’m not sure what my three boys will make of watching this struggle as it has unfolded before their eyes but, at the time of writing with my wife organising her mothers funeral and only a couple of weeks to raise the amount needed (£700) to save our possessions that are in storage, a little support would be extremely welcome.

A crowd funder worked for Alex Salmond within a short period of time… and I wondered if the same might be the case with this appeal.

As someone who has successfully helped others with their crowdfund efforts (#SaveEdShelf and #Get2ISTE) and have tried to create a Black-Friday-meets-giving-Tuesday as a way for supplier to thank educators for all the ways they give – whether with the £7 billion in unpaid overtime or the hundreds of dollars they spend on school supplies out of their own pocket – I never for a moment thought I’d be putting a campaign together for £700 to try to help secure belongings (Along with a whole bunch of other changes we've experienced).

As you can see from my HustleWhile You Wait post, I estimate that I’ve delivered value of £90,000 over the last few years to various organizations/movements.

I know that no one asked me to pitch in and assist with these and/or no mention of payment was made with many of these projects... I worked on them in an attempt to reskill from sales (Which educators highlighted in Twitter chats like #EdTechChat, #EdTechBridge and #UKFEChat were annoying) to community management, and because I felt my involvement with these projects would play a role in helping various people, groups and organizations to connect with purpose.

Obviously, I would welcome anyone to contribute to the GoFund Me campaign, but would be particularly interested to hear from anyone who has benefited from any of these projects in the past: 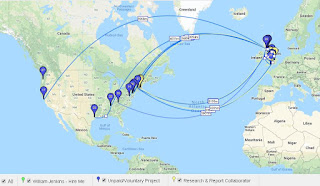 I would also be interested to hear from any EdTech suppliers who are looking to engage with UK Educators as I have some data that may be of interest to them.

Ask me about this map, the data that each entry will include and how I feel this could help with lead generation as well as helping your product/service get traction using 'social proof' in the way that I have explored in the reports and projects mentioned above. 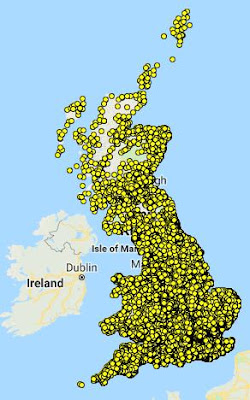 Posted by William Jenkins at 05:27