I'm currently following up on some work that I did with Pokemon Go 12 months on from the global sensation. This follow up work has involved a couple of fantastic meetings with Polybius Games Managing Director and Spy Quest Author, David Goucher.

This post details my experience of meeting David in a professional capacity and will be followed up by a personal perspective detailing when my youngest son and I check to see if the "Proof is in the pudding" with this "Ingress for kids" spy guy adventure.

So I'm checking through my old emails regarding the Pokemon Go report that I collaborated with the ISTE DigCitPLN on this time last year. There is an email from East Kilbride MSP Linda Fabiani, asking if I'd heard of Spy Quest.

I recall quickly scanning details about the game but put it in the "Check out later" pile of the to-do list. I check in on this as part of this Pokemon Go follow up and notice an article that I hadn't seen previously:

Wow! What an interesting story! I follow Spy Quest and David's Twitter account and we have a bit of a chat which results in us arrange to meet up a few days later.

Reading the article above was the extent of the research before I met David, the reason? Because I like to hear people tell me about their story. The rest of this post is about our meeting and how, where and why I feel this innovative work will have an impact.

We arrange to meet at Waterstones where David's opening comment to me is "I love being surrounded by books, this place is like a second home to me" Ah! A man after my own heart!

My opening question to David is

"If I were to say this was 'Ingress for kids' would that be an accurate description?"

To this day I cannot believe that there was an unknown battle for city landmarks across the world that would soon become the global phenomenon that were (and are) Pokestops... So I'm delighted to be aware that kids will be on secret missions under the guidance of Agent Jones and his team before it becomes a global phenomenon.

As the article above highlights, David was an undercover policeman. What the article does not pick up on are the trials and tribulations that he went through to get into the police. This story is best described by my youngest son when out for a walk where he must have stopped dead about 5 or 6 times to exclaim

Early Struggles
As anyone would be, I'm intrigued about the early career and I ask

"So why did you want to be a policeman?"

"Because of the books I read when I was growing up, Nancy Drew, The Hardy Boys and my favourite, The Three Investigators"

This was not a profession that was encouraged as his parents came from the tradition of learning a trade and getting accepted into the academy was challenging at the time.

After going through Police training he was to find that few forces were hiring but, after 6 years David did something that I regularly tell my own kids... "They can do anything they set their mind to" but quickly follow this up with IF they prepare and do their best!

Once in the force David said that he was so pleased to be doing what he wanted that his growth mindset saw him saying yes to every opportunity that came his way and led to becoming a bona fide spy guy.

"Has your life ever been in danger?"

"Anything that you can tell me about?"

A resolute "No! Afraid not."

David retired from the police force after lining work up with a company that looked promising but was a rather underwhelming experience (Been there, done that and got the T-shirt!).

"You've always had this idea of writing a book and the game, why not do it now while we have some savings"

But this was 2008 when the recession was biting and people were not in the mood for innovation so some tough times followed.

Your Mission... If you Choose to Accept it!David starts talking about the game and the results to date. 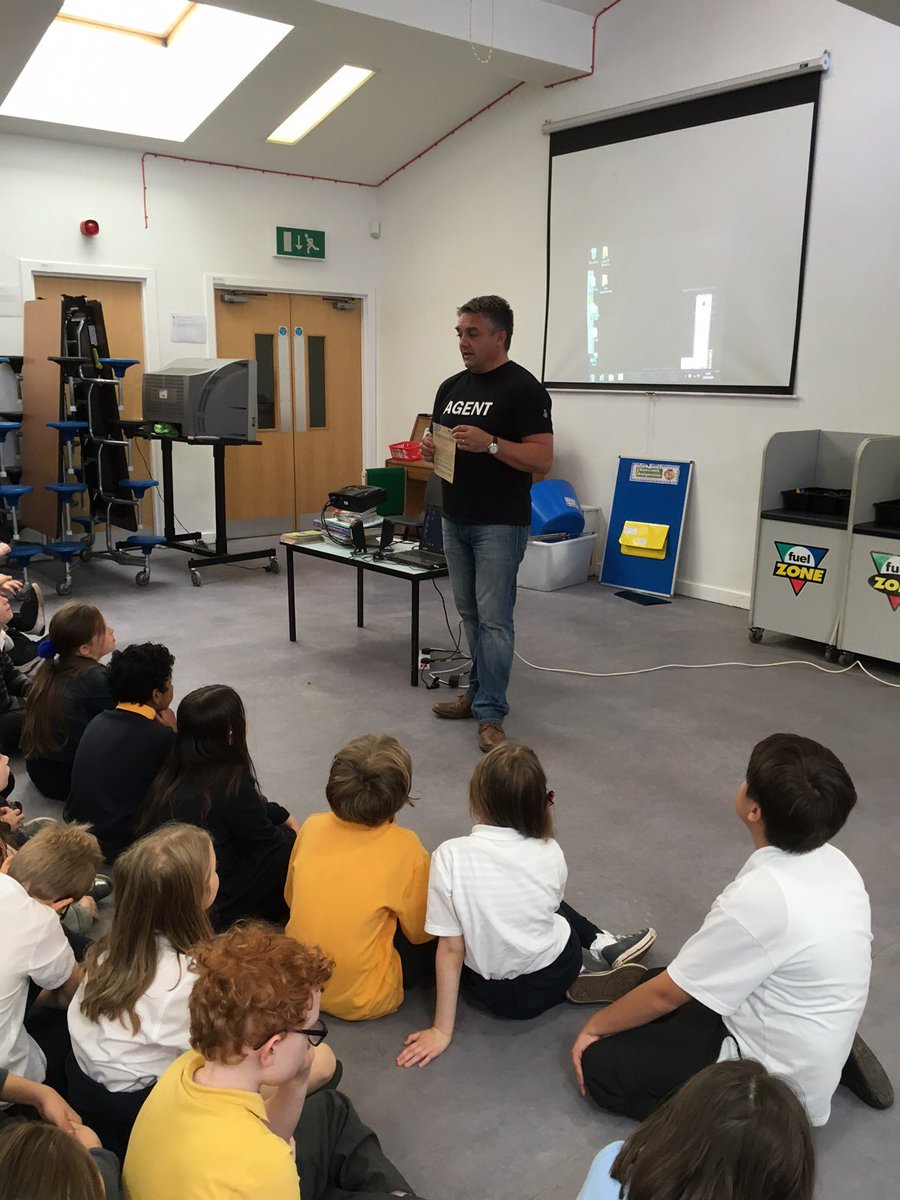 Like Ingress, the Spy Quest team have quietly been iterating their way to "Product Market Fit" something that can be seen by:
Then there's the fact that one of the first times the game was played at a hotel a Disney executive found it to be such a positive experience the game was that a relationship with Disney soon followed.

"We got lucky" David will tell you about his experiences in startup land.

Oh yeah? And the harder you work the luckier you get!! Thinks me. A lot of thought, planning, hustle and struggle has gone into this.

When researching Pokemon Go I was struck by the fact that John Hanke's vision was around the fact that he  “wanted to build applications that would deepen people’s involvement in their town or community, to encourage people to actually meet up in the real world.”

Can you imagine having a conversation with him about his vision at the point of inception? Can you imagine the strange looks that he got when discussing the idea?

As David is explaining Spy Quest and his vision I ask, "Has this plan changed much from day one when you came up with the idea? Has Ingress and Pokemon Go changed or influenced your plan in any way?"

"Nope! The only thing that's changed is being able to say to investors 'This is Ingress for kids' and they get the idea and concept a little quicker than they did before Ingress came out" Comes the reply.

"It feels like I'm sitting opposite the next John Hanke" I mention getting a sense of this plan and vision.

I've recommended a few ideas and projects in this blog. Some have been a passing "This looks promising" in a blog post, others have involved investing a considerable amount of time and heavy recommendation. Not all have been successful.

I look to the culture of these ideas more than ever before! Therefore I want to highlight a little about the things that I feel are important (but which may not matter all that much to others).

One of the best ways to do this is through a question that I asked in our second meeting:

"David if I was to say something along the lines of:

The reason I am doing this is because the books that I read as a child helped me to find my place in the world and I'd like to pay it forward to help others do the same?'

Would that be an accurate statement?

"Pretty much" comes the reply, followed by a smile from a kind and friendly face.

But there are all kinds of other things.


As someone who's been in life and death situations he knows the importance of ensuring that the culture in his team is right as he scales, so Spy Quest may be a little less likely to face many of the challenges that startups do as they scale.

...lastly but by no means least. David is focusing on education when there are all kids of other (easier) markets to scale and roll out in.

Impact
So what about the potential impact that Spy Quest could have?

I'm not an educator so I'm not going to say that this will do XYZ in the classroom, especially not when there are white papers about the potential of the game and endorsements by the Scottish Qualification Authority and Education Secretaries. 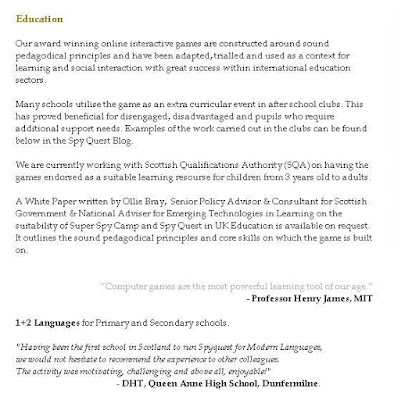 Have you spotted a theme with some of the projects that I've been involved with and/or supportive of?

Whether my first blog post or supporting the DigCitSummitUK, Pokemon Go, the Skypeathon, exploring Edcamps or talking about Spy Quest.

It's about shaking up the culture, it's about connecting and collaborating. As a society there is a lot of divisiveness as the politics on both sides of the Atlantic demonstrates (US Election, Indyref and Brexit).

There is also a lot of discord between the halves and halve nots. How does this translate on the ground? There can be suspicion towards people in authority and can sometimes include educators... but most definitely can include the police force.

What if... Steve Jobs is right and that

"I’m 100% sure that if it hadn’t been for Mrs Hill in 4th grade and a few others, I would absolutely have ended up in jail. I could see those tendencies in myself to have a certain energy to do something wrong. When you’re young, a little bit of correction goes a long way.”

Would the impression of authority figures change if Agent Jones was giving our young people some cool spy guy missions? I think they might.

Thought leaders like Malcolm Gladwell highlight that advantages and disadvantages amongst different socio-economic groups are more to do with cultural advantages (Social skills, growth mindsets, confidence building and learning outside of school time).

Equally researchers like Steve Biddulph highlights in raising boys the importance of young boys having male role models in their lives (Something Magic Johnston reiterates in his ASU GSV Summit presentation).

As you will see in the next post, I've seen first hand the confidence and active learning that Spy Quest provided my son... what impact would a real life Spy Camp and Spy Quest competition have for our youngsters in the summer holidays?

We've seen what Pikachu can do to get our kids out and about. I'm noticing that colleges who embraced the game included Pokemon Go in their Kids College programmes.

What could Spy Quest do to exercise our kids minds and aspirations? How empowering would it be for young Spy Quest Agents if they were on missions with college students in the way that youngsters engaged with students on college campuses?

If David Goucher has anything to do with it... A LOT! And I wouldn't like to bet against Agent Jones when he's on a mission!!

How big is this gonna be? Well if this video is anything to go by... It's gonna be big ;)