How I Met your Awesomeness: Plotagon... and Co-Opetition

This post details how I found out about a company called Plotagon and why within less than a week and after reading a single blog post about the startup why I think they will go far.

"Culture eats strategy for breakfast, technology for lunch, products for dinner and soon thereafter everything else too" Peter Drucker as quoted in this fantastic article Strategy Eats Strategy for Breakfast.

In "Why startups Fail" Dave Feinberg discusses how some VCs and startup gurus would argue that a great team with a bad product is better than a great product with a bad team.

Data Curation
When mapping BETT exhibitors in January Plotagon was on the list but, just like Declara (Then Pierson Labs) was on a list of exhibitors at ISTE 2013, it was simply one of many company's that I curated and mapped. 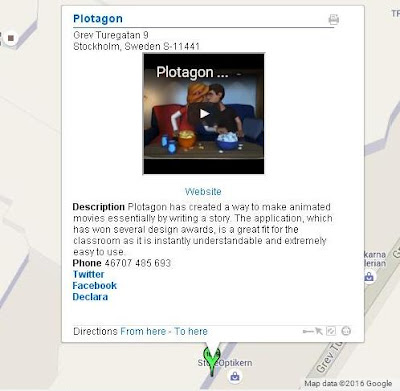 Pleased to Tweet You!
Last month when seeing if anyone was interested in getting involved with the latest project the text on the spreadsheet with this Swedish startup came to life like the text that they bring to life with their animations 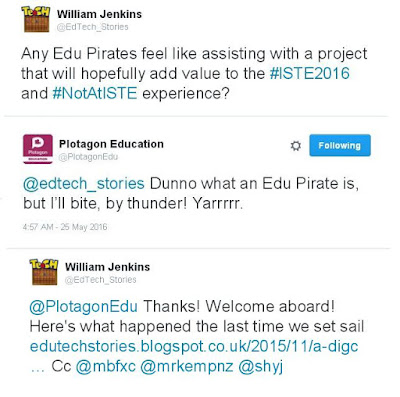 First Follower
Yesterday I received the first completed surveys asking people to contribute to the map by adding information to this Education Conference Speaker and Supplier Map Survey.

Plotagon Education was the "first follower," without whom there would be no momentum to an idea, I noted with interest that the person completing the survey was their head of community and I was reminded of Marc Smith's comments in the "Six Degrees of Separation" #Cmgrhangout session where he highlighted that #Cmgrs are a collaborative group that "Don't hate each other."

Thank you SO MUCH for taking the time to complete this survey!

Focus on the One
While I have learned so much for #Cmgrhangout and I was reminded of what I think is the single biggest lesson from following this amazing GHO, which is focus on the individual relationships, not the many, focus on establishing close 1:1 relationships as opposed to mass broadcasts where you are trying to engage with lots of people with the same message.

Culture! Culture! Culture!
Last night I checked out Klas Linkedin profile so I could connect with him there and saw all I needed to see for me to suggest that this company is worth checking out.

What did I see I hear you ask? Check out this "Two Years at a Startup" post and the video below and see if you can spot it.

Did you see it? To me this article and video screams passion, culture... and a good smattering of craziness (Invisible pole? What's that all about?)

Co-opetition
When I saw the animation I thought "Oh man! I think that this is the platform that made the hilarious "Music Teacher and the Parent" series of videos, which is particularly relevant as I had just written about parents avoiding taking educators time up in this way.

Does the fact that this video is by someone else who creates animations mean that it's any less relevant or funny? Does my appreciation for Plotagon getting involved mean that I shouldn't share this?

My core values include that we'll collaborate with anyone, even when it's uncomfortable and I have both collaborated with, and benefited from, helping a competitor (See How Helping a Competitor has been Beneficial).

Then there is that fact that our friends at Buncee and we hope that our buddies at Kyte Learning will be joining us soon... one does animations and the other creates PD videos, does this mean that competitors are collaborating in the same space? I have no idea!

However, what I do know is that Google, Apple, Microsoft et al are all competitors, but they collaborate when it benefits their users:

"There are many examples here of companies trying to kill each other in one market but working together in another — to better serve customers. Microsoft Windows runs on Apple Macs because customers wanted it. When Apple Maps failed, Apple asked its users to download Google Maps. Finally, within firms, it is understood that to thrive in today’s market, solve the biggest problems and serve customers, you need to assemble the best minds from anywhere in the world.

“When you obsess about the customer, you end up defeating your competition as a byproduct,” said K.R. Sridhar, the founder of Bloom Energy, a fuel-cell company. “When you are just obsessed about the competition, you end up killing yourself” as a byproduct — “because you are not focused on the customer.”  Thomas Friedman, Collaborate Vs Collaborate.

Some commentators feel that collaboration and more effective knowledge transfer will be factors in the EdTech scene in the not too distant future, if that's the case our merry #ISTE16Pirate crew may be onto something. Whether #ISTE2016 supplier or educator, speaker or attendee, at ISTE or #NotAtISTE, please feel free to come and join the party.

Thank you so much to everyone who has joined already.