So, I'm coming back up the road from London to Glasgow following the UK Digital Citizenship Summit and reflecting on the event... Specifically things that I could have done differently regarding my involvement with the project.

As well as a debrief I think of what's next... Priority #1 is to write a post to acknowledge the #Cmgr community and let them know the instrumental role they have played in my development before Community Manager Appreciation Day.

I'm drafting this post when I get a @Mention on Twitter from Marialice Curran to let me know that I've been nominated in the Best New Community Manager category for the Community Manager Appreciation Days Awards.

First of all Wow! Secondly thank you to the people who nominated me and to the CMAD panel. Thirdly, this would never have been possible without the willingness of Community Managers to come together and collaborate to share their experiences during #Cmgrhangout or if the educators, students and industry experts hadn't come together to pitch in and collaborate with organising #DigCitSummitUK.
Whether we look at this nomination from a Community Manager or Digital Citizenship perspective, the take away has got to be about the importance of listening to diverse voices (Within and across business/edu/industry boundaries) and collaboration.

I've been working on projects that looked interesting to me on a volunteer basis as I am what Tamera Rousseau-Vesta (the person who introduced me to the My Community Manager crew) called a "Sales Refugee."

I felt that the sales process in education was changing and have been looking to reskill as a Community Manager.
The UK Digital Citizenship Summit is by far the biggest community based project that I've been involved with. The recognition and praise I received before hearing about this CMAD nomination was pretty overwhelming.
I've detailed previously how anything that I have learned about community management has all been done online without an educator or school/college/university in sight in my Online Collaboration and the Pace of Change post.
I have also curated some of my faviourite links from these online experiences (See Community Management Resources and Buzzing Communities). If you take the time to read through all these links, you'd know just about as much as I do on the topic.
I thought I'd share a little bit of background and a few of the resources that have been particularly instrumental in helping this "Sales Refugee" to reskill. Without these resources any involvement/impact that I might have had with the UK Digital Citizenship Summit would have been minimal.
Diary of a "Sales Refugee"
First I'd like to share this post to highlight where Intercom's Vice President of Sales, Russ Thau, thinks that sales is headed "Why Cold Calling is Dead"
November 2010
I started to get uneasy about sales practices that had worked well in the past, they were less welcome and nowhere near as effective when I helped roll a project out to over 200 colleges in 3 years from 2006-2009.
I had no digital footprint at all at the end of 2010! No LinkedIn, no Twitter, no Facebook. Nothing. When planning my next move in my career I get told that "social media comes with the job today"
December 2010
I then attend a workshop by MITs Bill Aulet, who gets me switched on to Inbound Marketing and social business practices.I open my LinkedIn account and first Twitter account. I do some research, curate and lurk information and lists on Twitter for a while.
August 2012
Two separate projects deliver some big results within three weeks and, out with an initial email where I let people know about the project, there's hardly any outbound contact. The majority of queries are inbound.
I also explored content marketing by producing some reports that were well received.
December 2012I explore starting up on my own and, appreciating the value of community, decide on the title of Community Engagement Manager as my new job title on LinkedIn.
January 2014During BETT I have a twitter exchange with Tamera Rousseau Vesta (@Tamerarv), who let's me know about Community Manager Appreciation Day
Since this introduction I have found the #Cmgr Community to be so generous with their time and advice to newbies like myself. Here's an example of some of the best resources.
Yammer's Community Manager Playbook
One of the first Community Manager Playbooks that was shared with me was Yammers, which I really like because of it's focus on the importance of organisational culture... which is an important topic for me. 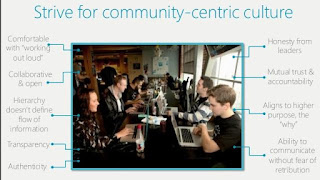 Scaling Personal Connections
This #Cmgrhangout was HUGE in terms of my understanding of social media. Having X,000 of followers and broadcasting one-way messages with the expectation that your followers will engage with your content is an unrealistic expectation.
Listening to how brands like Scoopit and LinkedIn scale changed the way that I use social media. Sure I sent content out via Tweets etc, but if and when people engaged with the content... I try to ensure that I connect in a meaningful way.
I think that a lot of people would get a lot out of this #CmgrHangout session.
The Online Community Life Cycle
I have a loooong list of Community Management books to read, one that I am delighted that I have read is Richard Millington's "Buzzing Communities."
Not only did this book provide a lot of insights and research into community, it also gave me hope that I just might be well on my way to re-skilling as a Community Manager.
As Richard saying in the introduction of his Community Life Cycle post:
"If you take the time to read this post it will completely change how you approach your community. You will be more informed than most community professionals you meet"
The Person Sitting Next to You...
I've found that David de Wald (@Historian) has some fantastic ways of taking ideas and points that I might try to make in a blog post or two but boil them down to the best 140 character Tweets of wisdom.
Nowhere is this more apparent than with the Tweet below, I have found this to be true in so many different settings and contexts, and is one of the reasons that the Digital Citizenship Summit appealed to me when I heard Marialice Curran describe the first summit in October 2015.

How to Deal with Trolls
Through following the #Cmgr community and EdChats like #DigCit I find it interesting how both groups handled the issue, they were quite different.
During one #DigCit Chat session the consensus seemed to be "I ignore the trolls," while community managers might look to engage them to see if the reason for the negative comments was due to an unresolved issue.
I wrote a snarky post on the topic when I felt that politicians had lost an opportunity when the issue of "Cybernats" was being discussed in the run up to the General Election, which was a product of the Scottish Independence Referendum, #DigCit Vs the Trolls - I'm a Student Friendly Social Media Educator.

Being snarky in this way potentially posed some problems as my blog and work started to evolve from a personal brand to a possible startup.

Using Core Values to Find a Brands Voice
As Tech Stories looks to become a limited company, #Cmgrhangout co-host Dom Garret got me to think about offering some guidelines to offer some guidance for me, customers, critical friends, employees and community members to say if, how and why Tech Stories might get a little bit snarky about initiatives or groups that we were previously supportive of.
I've road tested Using Core Values to Find a Brands Voice a few times since going through this exercise and I cannot recommend going through this process highly enough. THANK YOU Dom!!
Listen. Curate. Engage. Plan. Share.
As part of the Community Manager Appreciation Day celebrations Matt Black wrote this post on 5 Ways you Community Manager Moves the Needle Daily. I love this post! I love this post because not only do I feel that I can carry those tasks out... but I love doing them too!
AND this post pretty much details how the UK Digital Citizenship Summit came about and developed.
Any involvement with the #DigCitSummitUK event or planning would not have been possible if it wasn't for the support of the #Cmgr community over the course of the last two years since Tamera told me about the group.
Pay it Forward
Not long after finding out about #Cmgrhangout I wrote to Tim MacDonald and Jonathan Brewer to thank him so much for all their help as I found the advice to be so useful.
Today it's gone way beyond useful advice, the #Cmgr community being willing to take time out of their schedules to help newbies like me out has become a game changer with my career prospects.
Any time I wonder how you repay people for help like this, Tim and Jonathan are quick with the reply: "Just Pay it Forward"
I hope that I did that when I took a skype call with Marialice Curran and I said, "I think I might be able to help with this event you're talking about," but I had no idea that this offer might lead to being nominated for a #CMAD award.
Thank you to the #Cmgr, #Cmgrhangout Community, everyone at My Community Manager and the volunteers who pitched in to make the UK Digital Citizenship Summit happen.
Posted by William Jenkins at 20:48