This post details how I've went from proponent of Education Scotland and their Digital Learning Scotland and Developing the Youth Workforce agenda to turning Pirate on them... But how and why I'm still supportive of them in their work.

That is if they know what an honest relationship looks like.

DWP Vs DYW
I am writing this when I should be at the Job Centre signing on so I receive my benefits this week. There is no point in attending because
Equally my job centre have told me regularly "A blog post is not a job search," even when my agreement says that I am looking for positions in social media and community management, or that I have presented this post to my "Job Coach" a number of times:

Why You Should Hire Employees from Your Community

The irony that I will be sanctioned for trying to bring income and expertise to assist with the Developing the Youth Workforce AT THE REQUEST OF THE EDUCATION SECRETARY will not be lost on many...

Stress & Distress: SOS
So as team #DigCitSummitUK have just celebrated the fact that we had absolutely bossed one crisis with a challenge that threatened the Summit, we land head over heels into another because of my actions.


The insanity of this situation and the worry about what I have done to my family along with tiredness, the frustration at people standing by and watching boiled over during the last few days.

The reasons and behaviours on all sides are understandable, but the situation also needs fixed, or a lot of good work and opportunities will be lost.

Education Scotland have been extremely supportive in my work over the last 12 weeks but tempers have spilled over the last few days.

For example I was supposed to meet with Jim Fanning to see what could be done about the situation, I was running late and when I heard he was in a meeting and a as "Busy"  I walked out saying to reception "He's busy, I'm busy... We're all too busy... Thank you for your time"

The receptionist said "Humph" an expression that says "We of all the nerve... This isn't how you behave in civilized society"

Unsubscribe
The only contact I had from Education Scotland W/C 23rd November was an "Unsubcribe" message about the summit. I do not blame them for this. This is a bureaucratic organisation that needs to think about any action that it takes.

Neither is this concept of "Busy" new to me. I have tried to meet people who have been "Busy" for years when I've suggested that we meet... That is of course until I was do something of interest or to their dislike.

Then it's an urgent "Let's meet!" and you highlight "I've always been interested in meeting and collaborating"

Then there is the DM saying "Don't lead too much" if you start to make an impact "Not leading anything! I'm just pitching in...As I was asked to do!"Is my reply "That's not the perception." Well excuse me if what I'm doing is having an impact! FFS! If the relationship was there I'd have said either:

How do you only lead a little bit? You either lead or you don't, surely?

How about you guys "Lead a little bit?"

Civilised Behaviour
So, it's not OK for me to walk out of a reception area because we're all so busy. 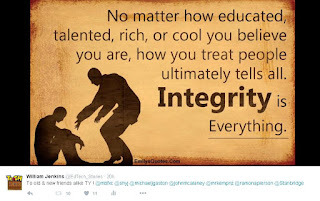 Turning #BeTheDigitalChange Pirate
So yesterday I snapped! I turned Pirate!

Marialice changed her Twitter picture... I followed her lead with a slight amendment. I knew years ago where the reform would come from: EdChats and Tech companies.

But I then engaged with a Troll. I  regretted it immediately because of the potential damage that this could have done to the team. I apologized to the team quickly and wholeheartedly.

I am using this post to do with Education Scotland and anyone else involved with what has happened over the last few days, the same as I have already done with the #DigcitSummitUK team.

I understand what went on and why. I am doing my best to fix things. Our survey has our members looking overwhelmingly looking at a London venue, feel free to change that by filling out this survey

#DigCitSummitUK: Venue & Data Survey We can see what can be done once we have this info, surely it's just as easy to plan 2 summits in two different locations at the same time, no? It would be this crew anyway!

Resetting the Course
The people I have been working with have seen how upset I am at the situation. Just like my previous post, I am being honest about a situation. These are realisms' not criticisms.

I tried to engage with FE and FELTAG with these same ideas I am exploring today for two years+. They simply didn't want to know!

Who'd have thought that improved EdTech products, less cold calls and costs savings for both colleges and suppliers would have been such a challenge! Leaving FE

So in July 2014 I wrote to all Scottish Schools with these same idea and got 3 responses, 2 of which were unsubscribes. The content I wrote was the very best I could think of, but had no impact. (This letter can be found in EdTech is Tough: Welcome to Scotland)

When I heard Chris van der Kuyl's keynote I felt that what was needed was help from people who were further down the digital journey, I knew some of these people and was confident they would help if I asked them to.

When Marialice told me about her US Summit I saw a game changer in the making after speaking to her for 10 minutes.

If I had anything to do with it I would ask the people who have put everything into this in the last few weeks to adopt a rule that we have in our hose which is that:

Let's Be Pirates!
We now have that group and what's also needed to affect sweeping culture changes is a counter culture, it seems counter-intuitive... but it works!!

It was Steve Jobs pirates that helped save Apple when "The Navy's" Lisa PC floundered but AppleII sales rocketed.

I'm going to ask the people who have turned pirate with me to help me to save 3 months of hard work I've put in and see if I can repair some fledgling relationships that I know I would have enjoyed and valued a great deal if it wasn't for this latest development.

I am working on ways to have a #DigCitSummitScot as well as a #DigCitSummitUK more to follow on this soon. In the mean time I'll leave you with the sage advice of Marshal Goldsmith

Over time these “minor” workplace foibles begin to chip away at the goodwill we’ve all accumulated in life and that other people normally extend to colleagues and friends. That’s when the minor irritation blows up into a minor crisis.

Why does this happen? More often than not, it’s because people’s inner compass of correct behaviour has gone out of whack – and they become clueless about their position among their co-workers.

So much of our interpersonal problems at work are formulaic. You say something that ticks me off. I lash back at you. Suddenly, we have an interpersonal crisis...The content is irrelevant. What matters is how easily we slip into small behavioural patterns that create friction in the workplace – and how just as easy we could assume behavioural patterns that don’t create friction. [21]

To both Education Scotland and the growing number of supporters aboard the #DigCitSummitUK Jolly Roger, I apologies wholeheartedly for letting the stress and strain of the last few days get to me.

The Mindful Mentor
As with our crisis with the venue we have put things in place to ensure this doesn't happen again.
James is involved with a number of groups that focus on mindfulness in entrepreneurship. The initiative that I am helping out with focuses on things like CyberEthics ie just because a tech company can do something doesn't mean that it is culturally right or good for society.

I know that when Angry takes control of your brain, joy could be lost forever.

So next time it happens I will still send the messages that I sent yesterday... but they'll go to James so I can vent. Then we can discuss...Take aim... and then shoot.

Otherwise I might just play an instrumental role in blowing a hole in the deck of our ship and destroy all the hard work others have put in.

Message in a Bottle:
Dear Bystanders,

If you can't get behind us with what we are doing you are welcome to just stand and watch...but it might be advisable if you don't get in our way. Why?

BECAUSE WE ARE ON IT!

No change from last post. What we said will get done WILL be done when we said it would be done.

Oh yeah... And check out for Twitter profiles to see how much we are growing.

Ships articles to follow in next post for new recruits. For the moment though, rule #1 we have a "No A Hole Rule" Policy (Can't say the word as we have a young stow away Nick Patsianas (@nickpatsianas)

NB To members of the Navy and Pirates alike... I may not be online for a day or two... Maybe more (Some should be delighted. I've respected their unsubscribe wishes. My turn to be "Busy" but not in a good or productive way. Fire fights of a different kind.

I'll do what I can to deal with any queries but please forgive any delay in my coming back to you.

Posted by William Jenkins at 02:44