Not Another Social Media Channel?

This post considers my experiences with a variety of social media channels, how "online communities" can evolve in the same way that societies do...why I've taken the decision to open another account, and why it seems different my other online experiences.

Obviously, this is by no means extensive and my reasons for not being on other popular social media channels is for various reasons, including;

1) Few Educators appear to be using it

When I first explored Social Media my plan was that I would focus on getting to grips with one medium at a time, familiarise myself with it before exploring other channels.

A World Outside of the Twittersphere
However, I got from LinkedIn to Twitter and then kind of stayed there. The reason for this was because Twitter seemed to be the platform of choice for educators.

Through checking out the profiles of people following Declara's Power ofCreativity and Imagination to Transform Education I realised that I had perhaps forgotten there is a world outside of Twitter and, in the grand scheme of things, not all that many educators are actually on Twitter.

I am obviously glad that spent time exploring these various channels and am so grateful to be able to connect with people across the globe (55% of my Twitter followers being in the US and 10% of being in sunny California). 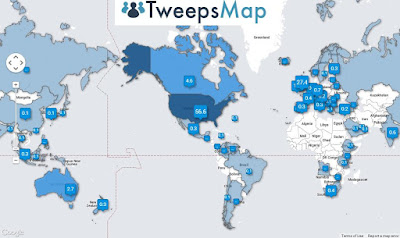 A comment that resonated with me when exploring the Power of Creativity and Imagination to Transform Education Collection has stuck with me. The comment is from Bill Johnston's Communities and the Collaborative Economy presentation

Connected Vs Connected
I have been pondering this issue for a while, especially as I have opened yet another social media channel that I will either forget about... or will need to maintain it and feed it with a constant stream of content, insights and discussions.

I have 3,500 connections on LinkedIn and 3,300 followers on Twitter but when I asked my LinkedIn connections "How can I help you achieve your goals?" most of the responses were along the lines of "What's the catch? What are you selling here?" 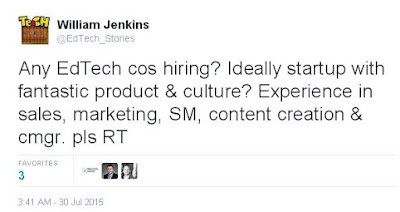 There is not a great deal of engagement (The reason for exploring this is because my plans for a startup are going slower than expected, as is usually the case #OptimismBias)

The reason for getting plugged into social media was to connect, I'm not sure if it's because I didn't know what I was doing on social media to start with, because it's education that I work in or if it's the norms of the various platforms. Whatever the reason, I have to question if I've "Connected" with my connections as well as I could have.

Perhaps not the best admission for an aspiring Community Manager but, through following the advice and practices of experienced Community Managers, I've since discovered that they do things slightly differently and how they scale personal connections.

Repetition or Redundancy?
Maybe it's partly because these platforms have evolved. I get a lot out of EdChats on Twitter, but I found the following scenario quite frustrating.

Last summer I joined a chat where the topic was similar to one that had taken place 12 months ago. The discussion was almost identical to the previous chat.

In the first discussion suggestions were made "Great idea! I'm going to try that" people Tweeted with enthusiasm. Fast forward to the discussion a year later and the discussion was very similar. I did not participate as much in the re-run.

Around the same time Starr Sackstein had written this post: Repetition or Redundancy or Repetition AND Redundancy.

I have since discovered that these issues have been around for as long as online communities have been around... the reasons and nature of this repetition may be the same too. Here are a few really interesting extracts;

"Howard Rheingold had all but stopped posting to The Well as a daily practice, blaming the exodus of himself and others on what he characterised as the tired, predictable feel to the place. 'After more than a decade on The Well, I found that I could predict who would react and how. And so I started asking myself: Why bother? Eventually I turned into little more than a lurker.'

Rheingold grew more interested in what he and others called Communities of Practice, which he defined as informal networks of colleagues and friends who share the same problems. He went on to start an invitation only virtual meeting place which he described as an online think tank, a place for knowledgeable, civil discussions about technology and the future, and culture... No assholes allowed" Katie Hafner, author of The Well.

"There are different stages of civilization that get different diseases - different forms of illness, I've watched The Well grow and I'm an absolute fan. I've loved every incarnation of it. There's a parallel that seems to fit here. Polio is a disease that is singularly absent from any hunter-gatherer community, from any agricultural community. It only existed in a measurable quantity when people came together in cities for the first time and didn't understand that it's a good idea not to defecate in the water that you drink. So polio only exists in cities. It only exists in cities in certain stages of development, it disappears when you reach the next stage of development and you get clean water. The Well is like that... The community has survived when it could have died many times over. It could have been killed by lack of business acumen, over population, or success.
The Well survived the same set of diseases that every other community conferencing system had"

Both the Well and Buzzing Communities author Richard Millington highlights how over used and abused the term community is in the virtual world;

"Online community is a much abused term. In current usage, almost any group of people interacting online is being referred to as a community, even if these people don't even know each other (even if they hate each other). We do a terrible job at distingishing between different social groups online. In the real world, we have mobs, tribes, crowds, audiences, gatherings etc. An online community is a group of people who have developed relationships around a strong common interest. If they don't interact with each other, haven't developed relationships with each other, or don't share a strong common interest, they're not a community"

Not Another Social Media Channel...  A Community of Practice

These extracts resonated with me given my experiences with social media and made me think more about Declara, namely:
What do I want out of this platform that others are not providing?

I thought about some of the relationships and projects that I have been involved with: the ones I had tried to establish but failed and compared them with ones that worked out... and those that were the most fun and fulfilling. The latter projects were pretty much what Howard Rheingold discusses, there were;

"Small groups where knowledgeable, civil discussions about technology and the future, and culture took place"

So, with Declara it is not so much a case of "Not another social media channel" but more a case of knowing what I want to get from this platform and, once again, it looks like this new platform could help with an idea I had a couple of years ago: Twitter EdChats: Chat or Change?

As with ISTE data and my goal for FE in 2014, Declara can help with revisiting another idea. In 2013 I wondered if we could use the last 10 minutes of Twitter chats to say what we were going to do to implement any ideas that were discussed. I also provided 8 projects that we could collaborate on;

I am know that many EdChats have affected a great deal of change with this forum, but my experiences with affecting change have tended to be in a different format.

I've been involved with Social Norms, SaveEdShelf, UKFEChat, EdTechBridge, Nurph, Get2ISTE amongst others and each of these projects appear to more like Rheingolds Communities of Practice and less like having thousands of followers or trying to keep up with the Twitter stream during a conference or busy chat. Does this mean that I am any more or less of a fan of EdChats? ABSOLUTELY NOT!

Does it mean that something has evolved, whether it's me or these online forums... I'm not sure.I know that many have made this work in this format, but I also know that I found more success when working with smaller groups.

Last week I asked if early users of Declara would Help Max with his Drive. A small group then used Declara's new discussion feature to consider ways they could help Max with setting up his business, this discussion is ongoing at the moment.

I'll be exploring the idea of working with small groups on other projects further and will keep everyone updated with any progress.
Posted by William Jenkins at 17:32