Telling Tech Stories: Self Promotion, Self Doubt or Selling? 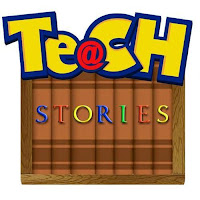 I've recently reviewed my activity on social media, and there sure is a heck of a lot of self promotion! I don't half bang on about ideas that I have come up with and/or products that I am a fan of!

If I was an educator I don't think this would pose a huge problem. I would be sharing work that I am proud of and giving a shout out to the providers of great EdTech with my PLN... and this would be called collaboration and sharing best practice.

Confused? You Will Be...
However, as a former sales person, I am painfully aware of the connotations and negative perceptions that come with sales experience in EdTech. I realise the need for caution with the type of content and frequency it's shared on social media.

One the other hand, I am extremely aware of the complexities with educator/supplier relations. I know the importance of momentum if new ideas are to have a chance... I also know the value that sales and organisational culture have in the EdTech ecosystem. Both matter. A lot!

If you need evidence of the complexities we need look no further than ISTE, how educators can sit in the bloggers cafe and give a shout out to any tech that they like... but hell mend you if your a dreaded "Vendor" in this space!

That is of course unless you are XYZ company, then you're not a "vendor," so this for profit company who is exhibiting at the conference, gets invited into the bloggers cafe for a chat (Probably an EdTech incubator company)... but then there are complaints when others do the same. Confused, you will be!

I can see the nature of the Sales Director/CEO order to the poor sales rep "Look at XYZ exhibitor they are in the bloggers cafe and have lots of people talking to them... GET OVER THERE AND DO THE SAME THING... This event is costing me a fortune, we need the sales to cover this event" Cue confusion with suppliers and educators alike.

With my blog being the catalyst for a few ideas that have ended up being fledgling projects... I thought I would write a few posts reflecting on my experiences with blogging, sales and "promoting my own stuff"

Self Reflection
If you look at my activity, it's not an altogether pretty picture! It doesn't half come across as blatant self promotion!

Two projects that I have been involved with - Nurph and #Get2ISTE - were mentioned at ISTE this year... and I was no where near the bloggers cafe...whether as an unwelcome invader or invited guest!

No calls were made, no commission was paid and no exhibition stands were paid for.

I thought I'd write about some of these complexities as I review things myself, as I though people might find my perspective of this particular brand of self promotion helpful.

I hope that in the next few posts that I would put my argument forward to, hopefully, demonstrate that this is not all about me, but about my understanding of the way new ideas get adopted.

I feel that this is necessary because, as Marshall Goldsmith observes

Over time these “minor” workplace foibles begin to chip away at the goodwill we’ve all accumulated in life and that other people normally extend to colleagues and friends. That’s when the minor irritation blows up into a minor crisis. Why does this happen? More often than not, it’s because people’s inner compass of correct behaviour has gone out of whack – and they become clueless about their position among their co-workers"

This has happened recently where I was criticised for poor social media ettiqutte with the #EdChat hashtag, when looking for support for a project that first appeared in my blog last July, which would eventually become #Get2ISTE.

Regarding Goldsmiths' comment above, what I see as "Exploring the merit for a new idea and looking for feedback from educators and critical friends" ...others see as "promoting my own stuff"

My own review and reflection of my blogging supports this criticsm, so thought it might be worth exploring. 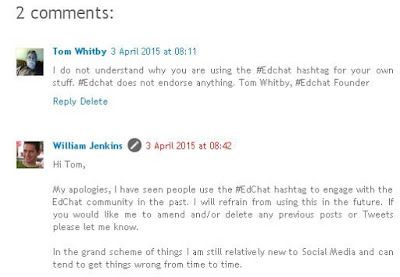 Blog Review
I have been reviewing my blog and social media activity recently. I received some feeback from a critical friend a while back who complemented me on how my writing had improved, but that all the links were distracting.

He said that he trusted me enough that I didn't need to provide all the supplementary evidence. What?! Stop the press! An educator trusting a sales guy? Now that's what I call progress!!

I took his advice on board and included less external links in my posts.

Since finding out about Declara I curated all the external links that I have used in my blog to support any points or arguments that I was making.

The reason for this was because I also wanted to prevent "Repetitive Link Disorder" so I would get more out of the EdChats that I join.

I found there were over 500 links in just under 200 posts. I found that I had indeed listened to my principal friend's feedback as less external links appear in my more recent posts. However, there was also a marked increase in the use of links to some of my other posts. Is this more evidence of self promotion? You might think so.

The same thing happens if I do a search for my blog on Twitter to see who is sharing the links, The majority of them are from me. Talk about being unpopular and self promoting... Ouch! 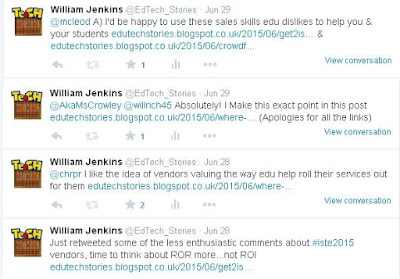 Self Promotion and Self Doubt
This raises the question... Have I become one of those self promoting bores that the unconnected believe dominate the Twittersphere?

Has the impact of a couple of successful projects turned me into someone who's effectively saying "Look at me. Look at me" at every turn?

Honestly? I'm not sure... I am sharing a lot of my own stuff. But I am also seeing ideas from posts that were written 2 years ago turn into something. They were not at the time because they went unnoticed.

Pushing the ideas forward has seen a few ideas be adopted without a single sales call being made.

What Do You Think...
In line with Goldsmith's observation is Richard Millington, the author of a fantastic book called Buzzing Communities, he suggests a six step escalation process:

"If an antagonistic member [of a community] is clearly a problem, you react in one of three ways. First, its likely they don't realise they're antagonizing members (this is surprisingly common, usually a personality issue), explain they need to tone their behaviour down because members have been complaining"

This was the case with me, I was not aware that my Tweets were any different to educators or other "vendors" and have apologised to the moderator, deleted a lot of Tweets which included the #EdChat hashtag and try to remember not to use this particular hashtag.


Social media ignorance? Poor EdChat Ettiquette? Self Promotion? I'm not too sure of the self promotion issue... But there is plenty of self doubt! I welcome the feedback from my critical friends... But to the critics, feel free to just block me or don't click on the links.

Because something I am in absolutely no doubt about though is that the sales process with EdTech is so broken! It is also rapidly changing and I am exploring new ways of doing things.

So as unpleasant as this criticism and self reflection is... It sure beats the cold calls, angry emails and the vendor hall any day! Vendors spending $2 million dollars collectively to get the kind of negativity they get during ISTE on social media is a concern. It would make me think twice about paying for a stand.

But then again, I've tried to reach out to both ISTE and suppliers to tell them this. The result? Either these ideas were not heard or I was told "Unsubscribe... Your content is boring and of no interest"

So I'll continue to explore these issues and reflect on all of this. If you end up agreeing with my findings, you'll see that the real issue is that educators can be hard to engage with new ideas... so makes the constantly "promoting my own stuff" a bit of a conundrum.

More on this in the next post Blogging, Sharing New Ideas... Or Selling?
Posted by William Jenkins at 00:29