Who Sells Voxer in Edu? Why we Need EdTech Review Sites

I've been advocating for alternative roll out methods in EdTech for a year and a half now. Earlier in the week I was asked if I would cross post a blog by Steve Isaacs and Lindsey Own called "Relationship Building is Key to #EdTech Collaboration" I said that I wouldn't because I didn't entirely agree with the post.

Now I 100% agree with the #EdTechBridge mission and I totally agree with the conclusion regarding the way things should be between educators and EdTech developers. Where I disagreed is with the fact that EdTech companies probably use the tactics they do because they are the most effective methods.

I pointed out that after 2 years of trying to engage educators in a niche sector in the UK that I'd given up due to a lack of engagement and was shifting focus to the US. I admitted that I was surprised at the amount of progress that had been made within a month!

However, I highlighted that an area where I seemed to have had an impact is with sharing the challenges that I faced in the UK, in the attempt to help a fellow EdTech entrepreneur who was about to close the door of the business... despite the fact that this founder and company also appeared to be adhering to the kind of relationship building that Steve and Lindsey advocates.

So I agree with where things should be, but I struggle to agree that this is as one sided as the post suggests. I've had a similar discussion with educators in the UK and, as irony would have it, it was when I reported on my experiences of the opening night of EdTechBridge "Virtual Reality... Or Pie in the Sky Myths"

Building Relationships... Or Bust?
My experiences and EdShelf's are not isolated, as Audrey Watters post highlights 2010-2011 EdTech Startups Where are the Now?

Now Audrey's post is right that most businesses fail, 8 out of 10 startups in any sector fail in the first three years and EdTech is no different. However, the companies that do succeed make sure that iterating their way to "Product Market Fit" with prospective clients is priority #1, but this can only be done with input from your target audience.

This is a major challenge in EdTech and may be the reason why at least some of these EdTech startups went out of business. Granted there are EdTech companies that think that they know it all and won't even take advice from colleagues and staff, let alone solicit advice from their customer base. This obviously leads to poor products which, in turn mean that the sales force needs to be more aggressive to hit their targets (See Ineffective EdTech for more on these arrogant and psychopathic CEOs).

But those who do seek out such advice in the most ethical way don't always get a whole lot of support. There are valid reasons why this might be the case, for example, there are now thousands of EdTech startups all looking to engage with time poor educators regardless of whether it's for ethical relationship building or these less welcome sales tactics.

This is why organisations and events like EdSurge Summits, EdTech Incubators, Tinker Ed, June Labs and EdTech review sites are vital today, they are able to manage this traffic. They can use their sector knowledge and strong relationships with educators to more easily identify the right partner, at the right time (ie the product conception phase) and contact them with the right approach. What are the benefits of this approach?

Who Sells Voxer in Edu? 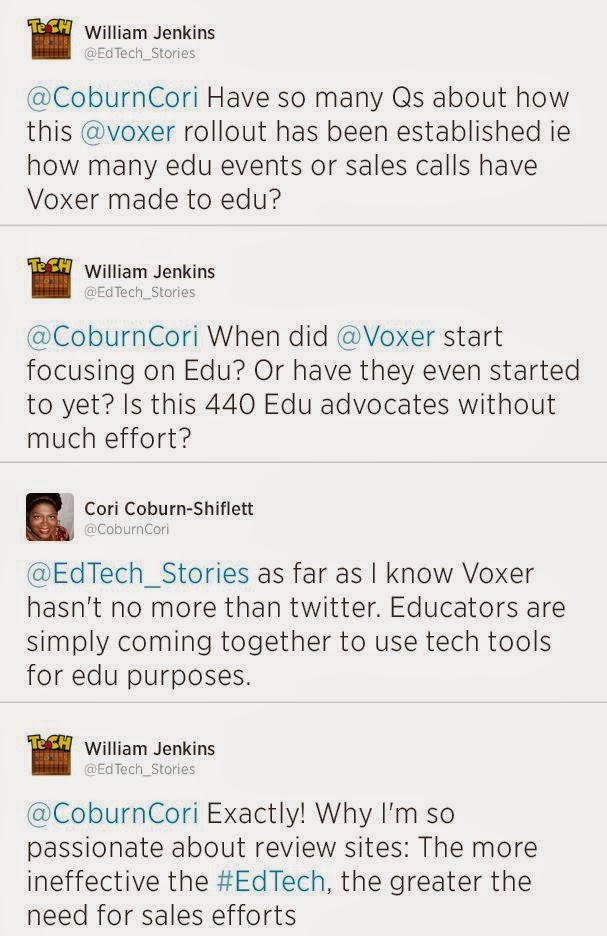 There has been a great Google document doing the rounds on Twitter which includes over 430 early adopters of Voxer. I have a major question about this roll out which is;

Who's selling Voxer to educators?

Now I know the answer to this question:

No-one is! It's Tech that's proving so effective that the handful of people who started using this said "Hey this is really cool! I'm going to tell my PLN about it"

This has seen roll out to 400 people who make up the early adopters and these proponents will help shape the product more and more, until it is bespoke to educators needs this, in turn, informs the "Early Majority" market that this service is worth looking into.

Organic roll out will be achieved at a pace that suits educators... and there isn't a sales person in sight.

Ah EdTech bliss! Effective tech without any pushy sales tactics! But here's where the problem with EdTech lies. Voxer is not a dedicated EdTech service, it's a mass market product that educators have started to adopt... this kind of roll out is almost impossible for dedicated education suppliers under the current model (well at least not unless you've got a massive amount of investment).

EdTech Nightmare
I have tried to implement the kind of roll out that is happening with Voxer in UK Further Education colleges but the uptake was dismal! I was looking to use my education contacts to develop a group of early adopters who would test various products which were new to UK Education (whether US EdTech companies, or startups who offer value to FE but who were not in the sector because of the difficulty of engaging this sector).

The idea was to identify early users who would collaborate and co-create to ensure that the relevant amends were made to ensure "Product Market Fit" had been achieved. When this happens these early users would naturally become proponents and would tell other educators about how great the service was, in exactly the same way that Voxer is rolling out.

The potential here was improved products with welcome engagement and the time to roll out would be quicker than traditional methods... Oh yeah, and with significant cost savings for educators and EdTech companies. But guess which group in the EdTech ecosystem wasn't interested? Yep you guessed it, it was educators.

I am aware of a number of organisations who are looking at alternative models and they are not doing so well, the most obvious example here being EdShelf. The relationships that these organisations have with educators should make them the "go to place" for new suppliers who should be asking "Can you get input from your community on our product for us" this would prevent the kind of open season on targeting time poor educators that Steve and Lindsey describe.

So while Educators marvel at how great Voxer is and how they wish that all EdTech could be like that, in my experience and opinion, it's actually educators who are preventing this from being a reality. I've written extensively about this in my EdTech report "Developing Relationships and Delivering Value" and on my blog (in particular "Sales people in Edu: The Fox of EdTech"). Within the next few weeks I might have more evidence of this with....

On the 18th of June I found out about Nurph's "Record and Replay" function for EdChats and since this time I have;

4) Circulated this plan with any moderators that I'm connected with

All of this has been done with no remuneration and with no formal affiliation with Nurph but just because it seemed like a good idea.

As you can see the content of this plan is the result of listening to educators on EdChats, and my #1 objective for exploring this in the first place was to see what conversations I was missing out on, as I could not attend 200 EdChats a week, and it was extremely time consuming going through 200 different storify accounts.

The Edu/EdTech Challenge
I've come up with lots of ideas over the last 2 years (See Good Rollout Processes Come to Those Who Wait... Oh the irony!), the first thing that I do with these ideas is go to my critical friends in education and ask "Hey guys what do you think of this?" and the feedback hasn't always "set the heather on fire" so I've dropped the idea and went looking for the next project that educators would say "I love it! This should be in every school/college!"

I'm coming to the conclusion that this has less to do with my ideas and more to do with the fact that educators don't actually know what they want, and I'm using this EdChat plan to test this. Regardless of the outcome, there will be benefits for one of the groups who make up the EdTech ecosystem.

We're entering into a 4 week consultation process on this EdChat plan where we're asking the moderators we're connected with to 1) Share this with other moderators, and 2) To let us know if they think any of the ideas are worth exploring further.

One of three things will happen here and all will have positive outcomes;

1) I'll be told that the ideas and plan is unworkable (Or that they are rubbish!)

Outcome: Nurph have saved a lot of time and money trying to make their idea work in a sector where there isn't the enthusiasm for it. I've helped them do what startup experts advise: Fail Cheap. Fail Fast.

2) That people will like the plan and, hopefully, some moderators will be so excited about the potential that they will collaborate and co-create

Outcome: Advocates of the EdTechBridge mission and alternative roll out methods will be vindicated. They will be able to say "This went from an idea to roll out within a 8-12 week period" and use this as a case study to demonstrate to other vendors the value of "Social Selling"

3) That my US experiences will be similar to the UK... I'll get little feedback or interaction from the educators I've tried to engage with

Outcome: This will be evidence to me that what the EdTechBridge post is suggesting is a challenge, forcing me to argue that the methods of EdTech sales people may be unwelcome but they are not unnecessary... They most certainly are a necessity! Both my experiences and Mike Lee's would perhaps suggest that, at the moment, they remain the most efficient and effective methods of engagement.

So, as far as I'm concerned, the ball is in Educators court. Therefore if you support this kind of engagement;

I don't mind if you come back to me to say the plan is rubbish (or with no explanation at all if you don't want to be involved), but please engage. Equally please support EdShelf even if it's the smallest token amount simply to send a message to other EdTech suppliers to help demonstrate the extent to which educators' desire alternative forms of engagement.

For whatever it may be worth, failure to engage here will play an instrumental role in me leaving Edtech, because I'm finding it too confusing an environment to be able to make any sense out of.