This post details how and why the much raved about startup Declara looks set to revolutionise the development of EdTech... Something that, based on the success of EdTech accelerators and the rhetoric from many experts, is in much need of some upheaval and "creative disruption".

Setting up the Demo
OK, so much like the day I met the awesomeness that is Declara, there is some random pointless politicians on the TV again, but am paying no attention because "I'm in the zone," I'm close to completing some mundane admin that's taken more than a week to pull together.

I don't mind as this mundane task just might help get some educators to ISTE... In which case it will be time well spent!

A yellow Skype alert is bouncing impatiently on the corner of the screen begging to be clicked, it's the "formidable start up lady" who was the subject of this recent post, we've had a few direct message conversations since writing the post.

"Would you be free to chat with members of my team?" She asks "I want to give you a demo of what we're working on"

"Sure, I'd love to" says I... but without really thinking things through. We agree to catch up later in the day. Ever heard the phrase "say in haste, repent at leisure"...That certainly applied here!

Why? Because I decide I better take a closer look at this company before the skype discussion. So I spend the next 30 mins looking into the company. My research starts and ends with LinkedIn.

103 people on LinkedIn, that's a big team for an alpha stage startup. but WOW! The caliber of this team beggars belief! Obviously I knew about James "Mr Microsoft" Stanbridge already, but there are 10 pages of people on LinkedIn who have left companies like Google, Microsoft, Lucas Film, Zynga to join this startup lady who, if she was a character in Wreck it Ralph, the following might be said of her

I've asked Ramona if she had any statistics on the collective time her team have spent at top innovative tech companies who have a strong fan base and at universities like Stanford, Harvard and Oxford etc. From what I see on LinkedIn it's decades and decades of experience.

I sure wouldn't want to bet against a team like this one achieving whatever they set out to do!

Declara Insights: Live on Air
But what new insights or ideas could I possibly have that could come any where near rivaling the kind of suggestions a team like this might have? A couple of Skype direct message conversations and the odd email is one thing, but offering any input to a team like this live on air? Let's just say it was a worrisome wait for a few hours.

Right. Time to speak to people at this formidable startup. But the technology fails initially, yes! A reprieve! But we're soon connected... but I needn't have worried, the conversation was informative, fun and friendly. I even felt that I added to the conversation in some way.

As for my on-going assessment of this Declara startup? Ani Chaudhuri started the demo off, and I interrupted his presentation at the end of the first slide...

"I GET IT!" I cheer excitedly "THIS IS EXACTLY WHAT'S NEEDED IN EDUCATION"
(NB These are caps of joy and excitement, not the angry, frustrated caps I use to shout at politicians).

Ani goes through the rest of the presentation, and I can see very clearly that this startup looks set to disrupt 3-4 different sectors, not just the way students learn, and how educators will be able to connect and collaborate with other educators and industry experts in real time around the world.

Here's how I can see Declara affecting EdTech companies.

Disrupting EdTech Startups
I joined this weeks' EdTechBridge where the topic was inspired by the Office of Educational Technology's new EdTech Developers Guide.

It's because of reports like this that I have so much more respect for US policy makers compared to their UK counterparts. I have not read all this report yet, but I did read chapter 3 and joined the chat... during which there was quite a bit of focus on areas that a lot of developers simply don't have access to, and are not able to affect to any great extent.

A lot of the early discussion in the chat was around being based in certain cities or being accepted into EdTech accelerators. I think that EdTech accelerators are fantastic. But, at the same time, they are able to play by a different set of rules (Which I detail in this "ROI Vs ROR: A Tough Sell for Suppliers" post).

Accelerators have to deal with issues of supply and demand, they only have the space and resources for so many startups. So, naturally, they pioritise based on merit and accept the "cream of the crop," which is fine... I certainly don't have any issues with accepting ideas based on meritocracy!

But this can tend to become a question along the lines of  "What function does boot camp play for the military?" Does it get soldiers fit? Or is it more of a case of it weeds out those who are not soldier material?

These factors set EdTech incubators up in a certain light, which again is great! Obviously, the more fantastic products in education... the better! However, an unhelpful by-product of this is that it makes it all too easy to criticise the practices of others. There is a tendency to weigh in on other suppliers with laments of;

"Why can't you be more like your EdTech accelerator brother"

In my opinion, this comparison is extremely unfair! Indeed, I would argue the comparison is about as fair as Michael Gove telling head teachers not to moan, or to ask inner city schools in a deprived areas,

"Why can you not be more like the selective, exclusive and very expensive private school down the road?"

A Declara-tion of Interdependence
That's my take on the situation today, but I don't think this will be my assessment in 1-2 years time... or less. Declara has the potential to change this and to bring the much praised EdTech accelerator model to the masses.

As any regulars of my blog will know, I have explored and tested a number of ideas around the roll out process of products in education, and am working on ways to improve some of the challenges I've noticed... despite the fact that I don't live in an EdTech hub, or have the luxury of being able to "Go Slow" because of the support of an accelerator.

I have however, looked at their model and try to replicate certain aspects. For example, I am careful not to do a thing with an idea without getting input from educators, even though getting this input can and has been a HUGE challenge in the past.

Two other major challenges with a potential founders' idea include;

1) There is a good chance that the hypothesis will be wrong. That the real idea and basis for the startup is adjacent to the original vision. However,

2) If the team is built around the original idea and the founder realises the company is heading in the wrong direction, it can be psychologically (and maybe even physically) a lot more difficult to shift focus.

So staying as small as possible, for as long as possible is a big priority during this "Product Market Fit discovery process." This is something EdTech startups in accelerators are able to do.

This is something that Decara will help EdTech startups do too... Their insights page might even set some 9 year old students up as EdTech Co-Founders and CEO's.

Founding a Company: A Big Risk
Something a lot of startups obsess about is the day they become an IPO, so they can get to "cash in" on all their hard work.

Ever wonder what the first company to offer shares was? Or why it undertook the practice in the first place? The East India Company was the first IPO and the model was designed to reduce the risks of ships being lost at sea.
I can't imagine a bigger risk today than actually forming an EdTech company until AFTER;
Sound crazy? Not to me it doesn't. There are probably as many educators with great solutions but don't get developed, as there are alpha male CEOs who develop poor products because they have a fundamental inability to listen or take feedback on board.

Unfortunately, these educators with great ideas lack the time, knowledge, resources to take a product to market. There is some support for "edupreneurs" and mainstream services like ODesk and Assembly can help here too.

However, I can't help get the feeling that Declara's "Insights" page will do for EdTech what Jane Jacobs' ideas on the diversity did with the city. Jacobs observed how order was created out of the city's chaos, how the clashes of culture brings new ideas and opportunities to the city.

The mixing of diverse groups of students, educators, suppliers, investors all coming together and sharing ideas, testing hypothesis, surveying people within their respective communities for input will be a significant development.

Through Declara's "Insights" page and functionality, I think that there is the potential for companies to spring up within as little as 3 months, but will be better researched than companies that have been going for 3-5 years+. 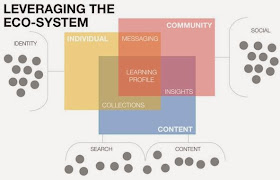 Through my discussions to get Craig Kemp to ISTE, Declara have been aware of my desire to recognise the time and effort that EdChat moderators put into their chats... so Ani was one step ahead of me.

Declara are as keen to recognise the time that moderators put in to collaborating and supporting their colleagues as I am. They are also very keen to get their feedback on their beta version when it goes live next week.

Ani told me that he will be arranging a webinar for moderators, and any who attend the demo to find out more about Declara's solution for educators will be eligible for other sneak previews. I was also assured that "lots of other nice surprises and goodies" would be made available to any moderators who attend this webinar, as the service is developed, finalised and rolled out.

To register to attend this webinar on Thursday 16th April at 9.30am PT (12.30pm ET), please visit Ani Chaudhuri's invitation for

"Connected Educators to Connect with Declara"

This will be a 20 min demonstration followed by a 40 min Q & A session.

Declara is all about organising the phenomenal amount of content that is now produced on a daily basis, so is a much needed resource.

However... we all have those faviourite books, Ted Talks, articles and posts that don't need to be organised with aid of technology, because they leave such a big impression on our thinking and help guide our strategic plans.

For me, one of these articles is Sharon LePage Plante's "What if #SatChat started a school"

"What if #Satchat (+other connected Educators) and Declara were to collaborate... Would this school be a possibility in the not too distant future?"

I hope that EdChat Moderators will accept Ani's invitation to connect on Thursday 16th April at 9.30am PT (12.30pm ET, 5.30pm GMT) to explore the answer to this question.
William Jenkins at 22:07
Share